100 Christians Killed in Clashes With Militant Fulani Herdsmen in Nigeria 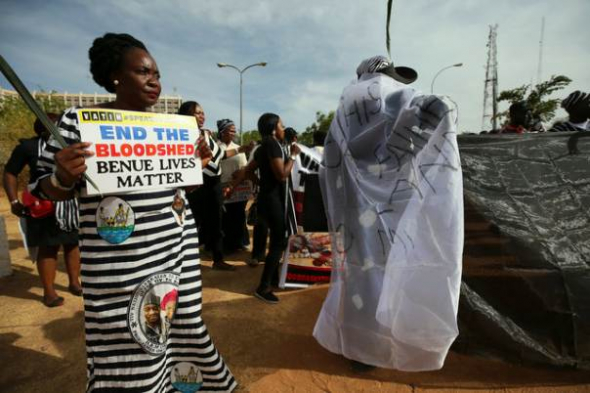 Islamic Fulani herdsmen in northeastern Nigeria, who have been accused of aligning with the Boko Haram terror group, killed more than 100 Christians after reprisal clashes earlier this month with the suspected help of the military, according to a report.

The killings took place in last week northeastern Adamawa state, where tensions began after some herdsmen raped and murdered a pregnant woman belonging to the predominantly Christian Numan community on her farm, and also killed her husband and brother when they intervened, according to World, which says that several community members staged a counterattack on the herdsmen but were ambushed.

The attack razed several villages in the southern part of the state, and a military jet bombed a Lutheran church and other targets, according to witnesses. The government claims it deployed military aircraft in response to the attack.

Stephen Mamza, chairman of the local Christian Association of Nigeria, was quoted as saying that the death toll is at least 100, and that others are still missing and might also be dead.

The 2017 Global Terrorism Index described the herdsmen, who attack Christians regularly in southern Adamawa, as terrorists in 2014. How the Geese of St. Eulalia Saved Barcelona, or Islamic Terrorists from Morocco Against the Holy Family of Christ
Michael Matyugin

How the Geese of St. Eulalia Saved Barcelona, or Islamic Terrorists from Morocco Against the Holy Family of Christ
Michael Matyugin
There is probably no one in Russia or America who hasn’t heard about the terrible terrorist attacks in Spain which occurred several days ago. However, our readers will probably be interested in learning about the “Spanish” view of what happened, and about the concealed, mystical underpinnings of these bloody events, of which absolutely nothing is said in the secular media. Nigerian Middle Belt State: 800+ Christians Killed, 800+ Injured, 100+ Churches Destroyed
The targeting of Christians appears to be carried out by the Hausa-Fulani Muslim herdsmen and by deliberate government policies to marginalize Christians and Christian communities.
Comments
×