Pat. Kirill announces agreement on exchange of prisoners in Donbass 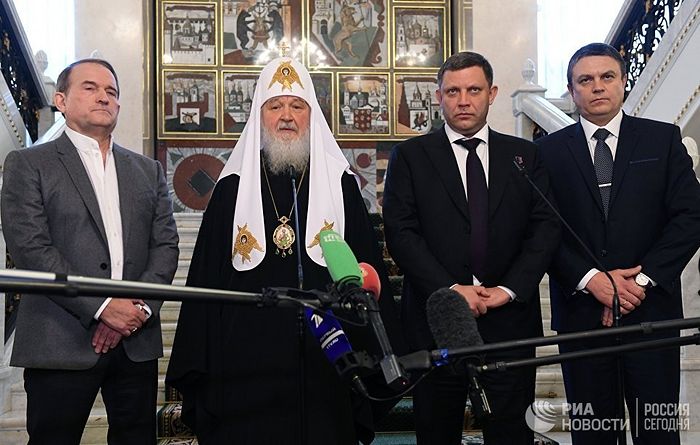 In a statement made after his recent meeting at Moscow’s Danilovsky Monastery with leaders of the self-proclaimed Donetsk People’s Republic and the Lugansk People’s Republic, as well as the head of the public movement “Ukrainian Choice—the People’s Right,” Viktor Medvedchuk, His Holiness Patriarch Kirill of Moscow and All Russia spoke about the agreement that had been reached on all the details of the exchange of prisoners in Donbass, reports RIA-Novosti.

“I hope that the exchange of prisoners, which will take place, will lay a beginning to this process, because the lists do not include everyone who will remain in captivity for some time, but I express the fervent hope that this first step will be continued with further efforts to release all the prisoners,” the patriarch stated.

The patriarch also expressed his conviction that the conflict in Donbass is unnecessary, serving only to weaken all participants: “No one needs this conflict—it weakens everyone involved. But most importantly—this conflict sacrifices many people; efforts from both parties are required to end this.”

As Donetsk head Alexander Zakharchenko said, Kiev will transfer 306 men to the civil guards, and 74 will be returned to Ukraine. The exchange is scheduled to take place on December 27.

“I hope that the Ukrainian side will stick to its promises,” Zakharchenko added.

On November 15, during a visit to New Jerusalem Monastery, outside of Moscow, Medvedchuk had asked President Vladimir Putin to actively support the proposal to exchange prisoners between Kiev and Donetsk. He also reported that Kiev, Donetsk, and Lugansk had agreed to a list of prisoners to be exchanged. The Russian presidential representative for the contact group, Boris Grizlov, noted that Kiev has here its last chance to return to the negotiation process, as Ukrainian authorities “have disrupted earlier agreements on prisoners.”

Pat. Kirill also noted how deeply the conflict grieves the Russian Orthodox Church, to see Orthodox brethren raising a hand against one another.

“This is a very important issue for the Russian Orthodox Church, because this is our flock on both sides. These are our people on both sides. Who so mourns as does the Russian Church in regard to all that is happening, when brother raises a hand against brother? I would like to especially emphasize the necessity of a speedy peaceful solution to this problem… And I greatly appreciate the constructive participation of both sides in the agreement on those positions which we can say, today, we have finally agreed upon,” His Holiness told journalists. Donbass Priests between Heaven and the Abyss
Svetlana Rayskaya
Like any trial sent by God to the mankind, war weeds out the unfaithful and the hesitant and strengthens the faithful, taking their souls to the new heaven. Situation in Lugansk brings people to God—Metropolitan Mitrophan
Asked by the Union of Orthodox Journalists, “How has the military conflict in the region changed your flock?”, Metropolitan Mitrophan (Yurchuk) responded that the ongoing tragic events have helped people to turn to God and the Church.
Comments
×