Humble yourselves in the sight of the Lord,
and he shall lift you up (Jas. 4:10). 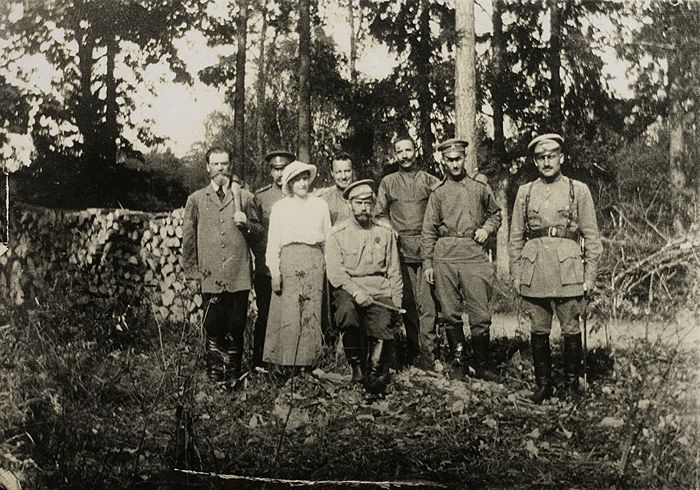 Nicholas II with his family in Tsarskoe Selo after his abdication. 1917. Photo: Public domain

Tsarskoe Selo is a small town not far from Petrograd. This place became the country residence of the royal family in the eighteenth century, and preserved this status all the way up to the revolution. The Alexander Palace was located apart from the other buildings, to the northeast of the main Catherine Palace, and it was there that the family of Nicholas II was imprisoned from March 8 to July 31, 1917.

The revolution, the tsar’s abdication, his arrest, and the taking into custody of his august wife and children—the family endured these events separated from the emperor, having no opportunity to morally support him in these cruel times. When the tsar left Petrograd on February 22, 1917, there was no suspicion that his return would be connected with such tragic events. The family was reunited on March 9, although it was no longer the family of the autocrat of the great Russian Empire, before whom all were in awe, but the family of a prisoner. Their life, now confined to the Alexander Palace and the adjacent territory, gradually entered a peaceful course, and acquired the traits of the life of an ordinary family.

Shut-up in Tsarskoe Selo, the family of the last emperor and their attendants endured practically no harassment in everyday life. It was a little corner of peace amidst the raging storm of the revolution. However, the heavy impression of the well-known events was exacerbated by the illness of the royal children. They got sick in mid-February, and their temperatures often rose to 104˚ and remained there for several days. It became clear on February 23 that Olga Nikolaevna and Alexei Nikolaevich were sick with the measles. Then Tatiana Nikolaevna got sick (February 24), then Maria Nikolaevna (February 25), then Anastasia Nikolaevna (February 28). By the time of their arrest, March 8, all the children were bedridden. Alexandra Fedorovna studiously recorded every child’s body temperature in her diary every day at different times of the day. For example, on March 16, 1917, the tsarina recorded the temperatures of Olga (97.7 in the morning, 104.3 in the afternoon, 98.2 in the evening), Tatiana (99, 104.4, 99), Maria (104, 104.4, 104.4), Anastasia (104.9, 103.3, 103.6), and Alexei (97 in the morning). Alexandra Fedorovna also recorded that day that complications began with Anastasia, which led to pleurisy and pneumonia.

The empress made these entries every day, carefully following the course of their sicknesses. Allegations that the empress was a bad mother, who placed all her work on numerous nannies, and herself only dealt exclusively with political matters, come to nothing against the fact of her obvious care that is evident from this diary.

The children’s sicknesses continued for a long time. Only by May had all the children recovered, and the family’s life moved into a relatively calm flow.

Living as prisoners, with an uncertain future and very hazy prospects for regaining freedom did not instill despair in the souls of both spouses. They believed the children should not be deprived of education due to the events they were experiencing, and so they took the teaching of various subjects into their own hands. On April 17, 1917, E. A. Naryshkina, the tsarina’s lady-in-waiting, who remained with her under arrest, wrote in her diary: “The tsarevich told me today, ‘Papa gave us our exams. He was very displeased and said, ‘What did you learn?’’ The young maids have offered their services as teachers, and the royal parents have followed their example. The emperor has taken on the task of teaching history and geography, the empress the Law of God and German, Iza—English, Nastenka—art history and music.” Alexandra Fedorovna also started teaching English later on. She recorded all the lessons in her diary, and later began to write brief synopses of the lessons. For example, on May 3 she studied the lives of Sts. Gregory the Theologian and John Chrysostom, the heresy of the Pneumatomachians and the history of the Second Ecumenical Council with Maria, and with Anastasia she discussed the meaning of the Parable of the Fig Tree, the Parable of the Lost Sheep, and the Parable of the Drachma. 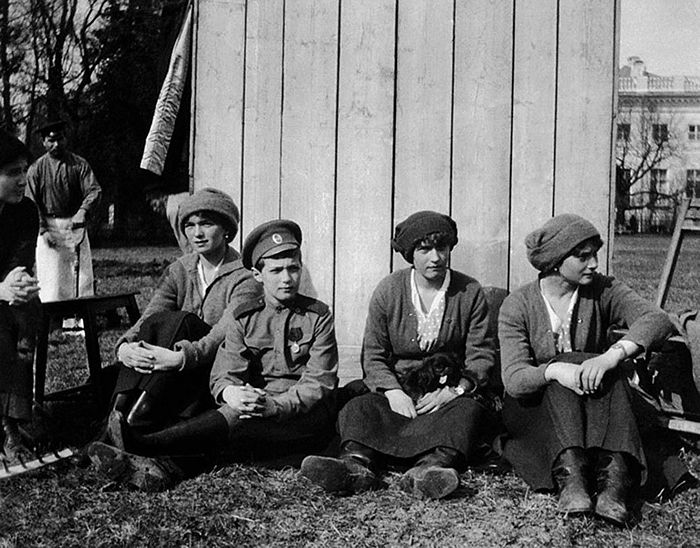 The royal children in Tsarskoe Selo before their arrest. 1917. Photo from MAMM/MIF archives

She wrote these synopses only for the Law of God lessons; Alexandra Fedorovna rarely wrote the titles of foreign texts on the subject of German or English.

First they taught the heir, and then the Grand Duchesses Tatiana, Maria, and Anastasia. The emperor only taught history and geography to Alexei. There was a schedule for the lessons, but, of course, there were also exceptions. Lessons were usually taught from 10:00 to 1:00. Sundays were always a day off, as were family member birthdays and Church feasts.

The subjects taught were close to the humanitarian cycle. The Law of God was compulsory for all of them, inasmuch as faith was the foundation of all the family’s moral values. The Law of God included within itself Biblical studies and the history of Christianity and other religions (Islam, in particular). English and German were also taught. Apparently, the older children already knew English well enough and didn’t need to study it any further; only the youngest—Alexei—studied it. Maria and Tatiana studied German, and Anastasia had special lessons on the geography of Great Britain, which Alexandra Fedorovna taught. In general, the tsar taught geography and history (which the grand duchesses already studied earlier) to Alexei.

One of the daily lessons was reading. The tsar would read both for himself and aloud for the whole family. It was an old tradition, preserved from pre-revolutionary times. Family reading time began in the evening. The tsar himself usually read in the so-called “Red Room.” There were various adventure novels, such as the words of Conan Doyle, Gaston Leroux, Dumas, LeBlanc, and Stoker. They had already read the Russian classics: Chekhov, Gogol, Danilevsky, Turgenev, Leskov, and S. Solovyov. Foreign books were mainly read in English and French, so that reading aloud was a kind of continuation of language studies.

What else was part of the daily routine of the Royal Family and their attendants in addition to lessons and reading? Oddly enough, it did not undergo any drastic changes, excepting only the hours of “state work,” which usually took up eight to nine hours daily, including Saturdays and Sundays. Now this time was filled with work in the garden, lessons with the children, and reading. Even before the revolution, the tsar’s daily routine included various outings, during which the tsar would try to do as much physical labor as possible. Going on hikes, the tsar would walk briskly and cover a large distance. Many ministers, venturing on the walks together with the tsar, could barely make it. His physical activity also included kayaking and biking in the summer and skiing in the winter. In the winter, the tsar often cleared the park roads from snow. All of these activities enumerated were kept up even after his arrest. The tsar made notes in his journal literally every day, such as this: 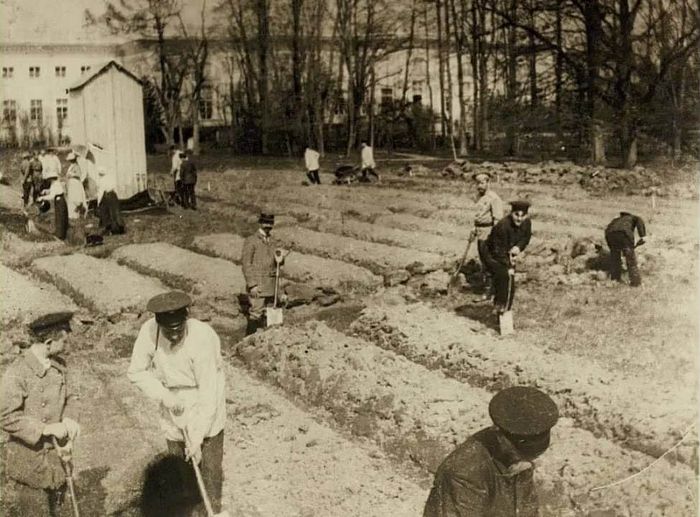 Tsar Nicholas II and his attendants at work in the garden. Tsarskoe Selo, 1917.

“June 7. Wednesday… In the morning I went for a walk in the park. After breakfast I cut down three dry trees in the same places near the arsenal. I went kayaking while people were swimming at the end of the pond…”

The tsar would go on his daily walks either with Prince Dolgorukov1 or the children. Part of the royal family, Prince V. Dolgorukov, and K. G. Nagorny2—the tsarevich’s “uncle”—regularly worked in the garden, including on holidays. They did this work between 2:00 and 5:00. In April, the work included breaking ice and digging the ground for a future garden. The guards not only watched with curiosity, but even took part. Thus, Nicholas II wrote in his journal: “I went for a walk in the afternoon and started working on the garden across from mother’s window. T[atiana], M[aria], Anast[asia], and Valya [Dolgorukov] were busy digging, and the watch guards and their commandant watched, sometimes giving advice.” Work began in May in the garden they had made: “We went to the garden at 2:15, and worked the whole time there with the others; Alix and our daughters planted various vegetables in the beds we’d prepared. At 5:00 I returned home sweaty.” After the crops were planted, they started caring for the garden and sawing trees for firewood.

After this work in the evening, at 5:00, he would have some tea. This tradition was also preserved from before his arrest, and did not change. Then the family again went outside, either to go kayaking or biking.

Every Saturday evening and Sunday morning, and every feast day, the family and its attendants went to church. In Holy Week (March 27-April 1), the family members went to church every day, and on Saturday they communed of the Holy Gifts. The services were held in their home or “field” church. A moleben for health was served on birthdays and name’s days. Besides the priest, Fr. Athanasy Belyaev, a deacon, and four singers, who, as Alexandra Fedorovna wrote, “wonderfully coped with their responsibilities,” came to the services. “April 9/22. What happiness when they serve Liturgy with such reverence and sing so well,” wrote E. A. Naryshkina in her diary. The services were a necessary element of the royal family’s life. If they were no longer the reigning monarchs, they continued to serve Russia—they served it by their fervent prayer. As soon as good information started to arrive from the front about the offensive, the emperor joyfully wrote, “June 19. Monday… Good news came just before lunch about the offensive that began on the southwestern front. Towards Zolochiv, after two days of artillery fire, our troops broke through the enemy position and took about 170 officers and 10,000 people, six guns, and twenty-four machine guns into captivity. Thanks be to the Lord! May God grant them a safe return! I felt completely different after this joyous news.” All that remained for the royal family to do was to pray for the salvation of Russia, and this, perhaps, was their final service to Russia.

1 Prince Vasily Alexandrovich Dolgorukov  (1868-1918) was an advisor to Russian Emperor Nicholas II, and a Marshal from 1914-17. After the arrest of the Russian Imperial Family following the February Revolution, he voluntarily accompanied the family into internal exile in Tsarskoe Selo and later Tobolsk. He was barred from joining them in Ekaterinburg in April 1918, and was killed by order of the Bolshevik government in that July (Wikipedia).

2 Clement Grigorievich Nagorny, the last Dyadka (“Uncle,” or sailor nanny) caretaker of Tsarevich  Alexei, who voluntarily followed the family into exile, protecting the children from the brutish Bolshevik guards. He was executed on July 6, 1918 at the young age of thirty-one. Illuminated and Radiant: the Royal Martyrs
Archpriest Artemy Vladimirov
On July 4/17, we honor the memory of the Royal Passion-bearers, murdered in 1918: Tsar Nicholas Alexandrovich II, his wife Alexandra Feodorovna, and their children—Tsarevich Alexei and the Grand Duchesses Olga, Tatiana, Maria, and Anastasia. Archpriest Artemy Vladimirov speaks about the example given to us by the lives and deaths of the holy Royal Martyrs.
Comments
×