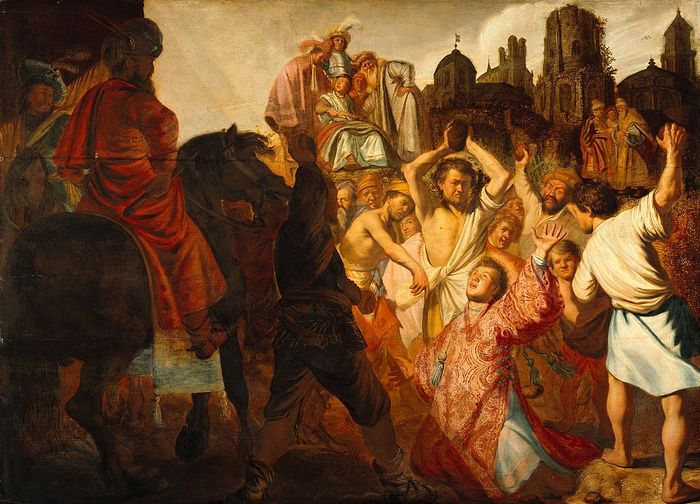 This week in the news we learned of yet another attack in Egypt by Muslim extremists against the Coptic Orthodox Church. Men from the so called Islamic State attacked a church in order to kill some Christians. There is little doubt if these people had their way, they would destroy the Christian Church.

And yet they are not the first or only people who ever wished to destroy Christ and Christianity.

We heard St. Paul himself say in his letter to the Christians as Galatia:  For you have heard of my former conduct in Judaism, how I persecuted the church of God beyond measure and tried to destroy it.  (Galatians 1)

Despite Paul’s murderous intentions and hatred for Christianity, God was still able to call Paul and have him become the evangelist to the Gentiles. Imagine if the Christians in reaction to Paul and in defense of their fellow Christians, had killed him? The Church would have been deprived of one of the Apostolic leaders. God was willing to wait for Paul’s conversion in order to bring Paul to salvation.

Let us pray that God will find the way to use all who would persecute us Christians! Our prayer should never be for their death but for their conversion. Whatever their intentions are against us, we should pray that they be saved and unite themselves to Christ.

Even before St. Paul willed to destroy the Church, we know in the Christmas Gospel story that King Herod wanted to destroy Christ as well.

Now when the magi had departed, behold, an angel of the Lord appeared to Joseph in a dream, saying, “Arise, take the young Child and His mother, flee to Egypt, and stay there until I bring you word; for Herod will seek the young Child to destroy Him.” (Matthew 2)

And despite the fact that Christ was a mere infant, as helpless as any human baby is, Jesus was not destroyed. In fact, God destroyed no one in protecting the infant Jesus. The killing was done by the enemies of Christ.

While we contemplate the effort to destroy the Christ child, remember also what salvation is: Christ from his conception in the womb of the Virgin unites God to creation, divinity to human beings, heaven to earth, the spiritual to the physical.   Salvation consists in the restoration of communion between God and creation. And when Jesus was but an infant, the salvation of the universe was no larger than that baby. Yet in that child, the reconciliation between God and humanity was already accomplished.   The Kingdom of Heaven began on earth as a seed and slowly has grown and spread into all the world.

Jesus told this parable:   “With what can we compare the kingdom of God, or what parable shall we use for it? It is like a grain of mustard seed, which, when sown upon the ground, is the smallest of all the seeds on earth; yet when it is sown it grows up and becomes the greatest of all shrubs, and puts forth large branches, so that the birds of the air can make nests in its shade.”   (Mark 4:30-32)

The Kingdom of God did not come from heaven to obliterate the earth, replacing the things of the earth with the things of heaven. The kingdom of God did not come on earth as some tsunami eradicating everything in its path. Rather the kingdom of heaven entered into earth as a child in the womb of Mary. If God used a normal human egg to begin the process of the incarnation, then the Kingdom of God started in this world only .1 mm! The Kingdom of Heaven begins as a tiny seed, becomes a zygote and eventually an embryo and then a fetus. The size of God’s Kingdom could actually be measured at a point in history. It has grown slowly like the mustard shrub, transfiguring and transforming people one by one. Reclaiming humanity from the inside. The Kingdom of God is not an external force that smashes the universe to rid the cosmos of anything that is not part of the Kingdom.

And yet, when this kingdom of God was still no bigger than the infant Jesus, the world was seeking to destroy Him and thus to end salvation, to end our reconciliation with God, to end our communion with God. The Kingdom of God did not come to destroy the world, but the world was seeking to destroy the Kingdom of God. “The world” 2000 years ago, like today sets itself in opposition to the reconciliation and communion which God offers to the world. God in love works to reconcile with humanity, humanity is still interested in its own way and cares little for the Communion which God offers.

The mystery of God and God’s infinite love being contained in a little child – that is the wonder of Christmas. Our salvation hinged upon the Christ child living in a world in which the Jewish King and the Roman Empire wanted him dead.

O, the mystery of God’s way! We want God to come and smash His enemies (or maybe more truthfully our enemies) with nuclear weapons which annihilate them. Instead, God enters the world as a child, vulnerable to all the wickedness of the world. God’s plan for eternal salvation involves a helpless baby capable of being killed in a second.

When we think about that we come to understand something about our God, and we realize there is a lesson there about why the world continues the way it does and why God doesn’t just annihilate everything and everyone God is unhappy with. God’s desire is that we all be saved.   “Say to them, As I live, says the Lord GOD, I have no pleasure in the death of the wicked, but that the wicked turn from his way and live; turn back, turn back from your evil ways; for why will you die, O house of Israel?”   (Ezekiel 33:11)

It is for the same reason that God kept St Paul alive and did not destroy him in his wickedness. God waited for St. Paul to convert rather than destroy him.  “God our Savior, who desires all people to be saved and to come to the knowledge of the truth.” (1 Timothy 2:3)

God patiently awaits our repentance and conversion. He is patient even with those who want to destroy Christ. “Do you not know that God’s kindness is meant to lead you to repentance?” (Romans 2:4)

We end up experiencing exactly what God’s chosen saints in every generation experienced:

“They were stoned, they were sawn in two, they were killed with the sword; they went about in skins of sheep and goats, destitute, afflicted, ill-treated— of whom the world was not worthy—wandering over deserts and mountains, and in dens and caves of the earth. And all these, though well attested by their faith, did not receive what was promised, since God had foreseen something better for us, that apart from us they should not be made perfect” (Hebrews 11:37-40).

We will be made perfect only with all those who are to be saved. Globally, religious persecution is Christian persecution
A diverse set of motives drives the persecution. In much of the Middle East and parts of Africa, it’s Islamic radicalism; in India, it’s Hindu fundamentalism; in China and North Korea, it’s police states protecting their hegemony, and in Latin America, it’s often vested interests threatened by Christians standing up for peace and justice. The Globe, in a series that launches today, will report back from all those fronts in this unholy war. Into the Christian Closet

Into the Christian Closet
Good job, Social Justice Warriors. You have destroyed a man’s business.

Iraq's Christians Persecuted By Isis
More than 125,000 of Iraq's Christians have been forced to flee the homeland they have lived in for nearly 2,000 years because of ISIS violence and threats.
Comments
×