Story of Fr. Seraphim’s Military Visitor, as Told by Hieromonk Joasaph (Tolstosheyev) in 1849

How St. Seraphim’s spring revealed a man’s evil intentions to overthrow the government and start a revolution. 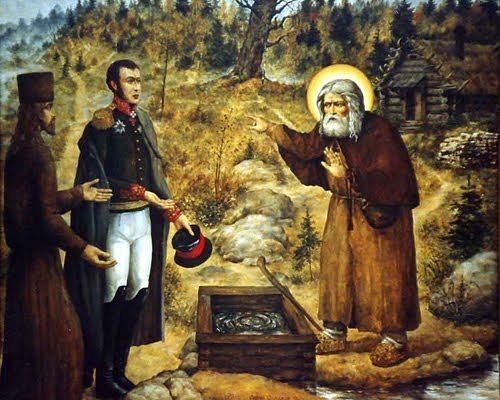 This happened just before that very time when the enemy’s wrath was taking up arms against the sacred authority of the Tsar and had created rebellion and uprisings in St. Petersburg.1

Once after dinner I went from the monastery to Fr. Seraphim in his near desert, which was located at the spring of the Theologian, by the lower road that lay along the banks of the Sarokva River and which led straight to the elder’s spring.

I saw Fr. Seraphim from yet a distance—he was standing by the log well at his spring on the western side, and leaning with his elbows on the well, holding his head in his hands, he was staring at the spring.

I had was yet several sazhens (an old Russian measurement equaling seven English feet) away from him when suddenly I saw that from the northern side, from the hill on which the elder’s hermitage stood, a middle-aged military man of average height, bare-headed, holding his cap in his left hand, came running over to the elder. I stopped to allow this military man to freely receive the elder’s blessing, and beheld an extraodinary event.

When the man came up to Fr. Seraphim and demanded his blessing, the elder did not change his position at all but continued to stare at the spring as he was doing before. When the military man had repeated his demand several times, the elder turned to him with the most severe expression and asked him sternly, “Of what confession are you?” As if shocked by the elder, the military man quietly replied, “I am not of the Russian confession.” Then the elder said to him, “Then go back where you came from.” But when that man again stretched forth his hands and asked for a blessing, the elder again with redoubled sternness, disregarding the man’s personage and rank, shouted, “I told you to go back where you came from.”

Stunned even more by the elder’s countenance and voice, the military man humbled himself even more and again stretched out his hand to ask the elder’s blessing. But the elder not only deprived him of the blessing as he did before, this time he shouted so loudly and mercilessly, as at the greatest enemy of the Church and apostate. I had never seen Fr. Seraphim in such fierce spirit, and I myself was confused and judged him, thinking that he was in the throes of some sort of temptation. It was frightening just to look at him then.

After this final and terrible refusal the man no longer dared to insist on a blessing and set off upon the same rode from which he had appeared. Only it was clear that he had as if lost his composure, or was completely shocked by the elder’s unmerciful attitude and threatening words addressed at him.

All the way back, until he disappeared from sight, I could see him holding his head in his hands and wiping away the sweat that was beading on his face.

After his departure, that very minute I approached the elder with fear, thinking that he would be just as merciless towards me, and I bowed to his feet. But the elder blessed me with his fatherly love and then taking me by the hand led me to his spring, telling me to look at it, saying, “Did you see that man who came to me?” I replied, “Of course I saw him, batiushka—I was standing the whole time nearby watching, and I mentally sinned against you by judging you for insulting that man and not blessing him no matter how many times he asked you.” Then the elder again directed his attention to his spring and said to me, “Look at the spring—it showed me just who that man is.” Surprised at the elder’s words and not understanding how a spring can show who an approaching man is, and supposing that the elder probably just wanted to hide in this the living grace that abode in him, I looked at the spring and saw it absolutely perturbed. It was like when someone intentionally stirs up a spring’s water in order to cleanse it of overgrown moss or too much residue on the bottom, so that all of that dirt would be carried away through the drainpipe.

Then Fr. Seraphim said, “Do you see, just as the spring is stirred up, that is how that man who came wants to stir up Russia.”

I was horrified at the elder’s wondrous grace-filled clairvoyance, as well as his zeal for God, which he disclosed against this secret enemy of the Church, the sovereign, and the fatherland. It soon became known that the Lord triumphantly revealed and destroyed all of the impious plans of these malefactors.

1 This is referring to the rebellion of 1825 by Decembrists, who belonged to secret Masonic societies. The military visitor was most likely one of the Decembrists who lived near Sarov.
See also “Our Salvation is in our Will.” St. Seraphim of Sarov
Metropolitan Anthony of Sourozh

“Our Salvation is in our Will.” St. Seraphim of Sarov
Metropolitan Anthony of Sourozh
When he was asked one day, in what does a perishing sinner differ from a righteous man who is saving his soul, a saint, St. Seraphim answered: Only in his resolve…

Saint Seraphim of Sarov: On the Acquisition of the Holy Spirit
Conversation with Motovilov
"However prayer, fasting, vigil and all the other Christian practices may be, they do not constitute the aim of our Christian life. Although it is true that they serve as the indispensable means of reaching this end, the true aim of our Christian life consists of the acquisition of the Holy Spirit of God.
Comments

Anthony1/15/2018 10:00 pm
Hello good morning. St Seraphim of Sarov will be returning to preach universal repentance to all before the final reign of antichrist. This site offers a very good artikle: