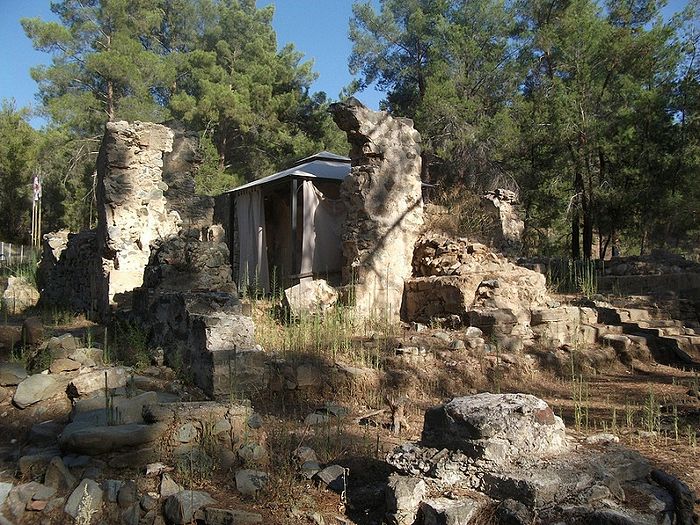 Ruins of the Gialia Georgian Monastery on Cyprus. Photo: staticflickr.com

The government of Cyprus and the Church under the headship of His Beatitude Archbishop Chrysostomos have made the joint and unprecedented decision to gift a large plot of land to the Georgian Orthodox Church for use for a large-scale monastery complex, reports Agenda.ge.

According to the Georgian news site, the 15,000-sq.-yd. complex in Agia Marina in central Cyprus will be the largest monastic complex of the Georgian Church anywhere in Europe.

A dialogue on the issue had been underway for years, and the final decision was made on January 4, the 85th birthday of His Holiness Patriarch-Catholicos Ilia II, as the official website of the Georgian Parliament announced on January 12.

A Georgian parliamentary delegation had paid a working visit to the Republic of Cyprus in late December, discussing, among other things, the transfer of the monastic property. The delegation visited the 10th century archaeological site which is the future site of Georgian monastic life in Cyprus.

The Cypriot government made a positive decision regarding the lander transfer on December 19, with only a few formalities left to be handled before the final decision was made and Pat. Ilia signed the relevant documents on January 4.

As Georgian Dream lawmaker and head of the Parliament’s Regional Politics Committee Zaza Gabunia noted, Georgia and Cyprus have long had strong ties, and they look forward to continuing to strengthen them. This friendship is demonstrated by this unique decision on the part of the Cypriot state and Church.

Metropolitan Saba (Gigiberia) of Khoni and Samtredia (Georgian Church) noted that the move was an “exception made for Georgia by Cyprus,” and that the Georgian Church was released even from the responsibility of paying the property tax for the plot.

Fr. Zakaria also pointed to the important contribution of Georgia’s Ambassador to Cyprus Revaz Lominadze, who in turn highlighted the unique fact that the Church and government of Cyprus, which typically have tense relations, the latter often clamping down on Orthodox life in the nation, came to this decision together: “The uniqueness of this fact lies in the fact that the Church of Cyprus and the government worked together in full synchronization to make this important decision.”