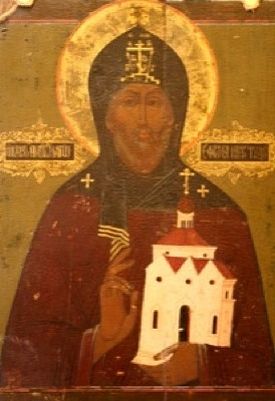 Saint Ephraim of Novy Torg, founder of the Saints Boris and Gleb monastery in the city of Novy Torg, was a native of Hungary. Together with his brothers, Saint Moses the Hungarian (July 26) and Saint George (in Hungarian “Sandor,” pronounced “Shandor”), he quit his native land, possibly because he was Orthodox.

Having come to Russia, all three brothers entered into the service of the Rostov prince Saint Boris, son of Saint Vladimir (July 15). Saint Ephraim’s brother George also perished in the year 1015 at the River Alta, with holy Prince Boris. The murderers cut off his head, and took the gold medallion which he had received from Saint Boris. Moses managed to save himself by flight, and became a monk at the Kiev Caves monastery.

Saint Ephraim, evidently in Rostov at this time, and arriving at the place of the murder, found the head of his brother and took it with him. Forsaking service at the princely court, Saint Ephraim withdrew to the River Tvertsa in order to lead a solitary monastic life.

After several other monks settled near him, he founded a monastery in honor of the holy Passion-Bearers Boris and Gleb in the year 1038. The brethren chose him to lead them. Near the monastery, not far from a merchant’s road to Novgorod, a wanderer’s home was built, where the poor and travelers stayed for free. Saint Ephraim died in old age. His body was buried at the monastery he founded. The head of his brother, Saint George was also placed in the grave, in accordance with his last wishes. The relics of Saint Ephraim were uncovered in the year 1572.