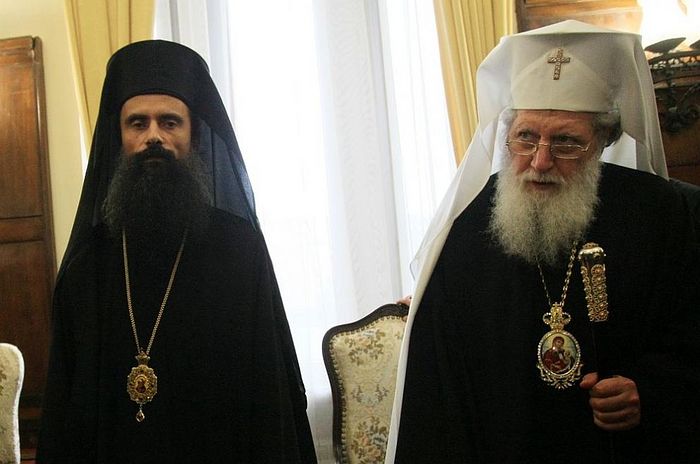 His Grace Bishop Daniil of Dragovitsa, formerly the vicar bishop to His Eminence Metropolitan Joseph of the Bulgarian Eastern Orthodox Diocese of the USA, Canada, and Australia, has been elected to the See of Vidin, Bulgaria, reports the site of the Bulgarian Orthodox Church.

Thus, Bp. Daniil, who has served in America since his appointment in 2010, has returned to serve in Bulgaria, where he was first consecrated as a bishop in 2008, serving as the vicar to the Metropolitan of Nevrokop.

The canonical election for the new metropolitan of Vidin took place on Sunday following the Divine Liturgy in the altar of the Church of the Holy Tsar Boris-Mikhail in Sofia. Of the 13 votes from the Bulgarian Holy Synod, Bp. Daniil received 11, the remaining 2 going to His Grace Bishop Gerasim of Melnik.

The Diocese of Vidin became vacant when His Eminence Metropolitan Dometian reposed in September, after occupying the See since 1987.

His Holiness Patriarch Neofit of Bulgaria solemnly proclaimed the Synod’s decision and greeted the newly-elected prelate of Vidin, recounting his episcopal ministry thus far and expressing confidence that Bp. Daniil would continue to serve with Christ the Good Shepherd as his example.

For his part, Bp. Daniil stated,

With consciousness of my weakness and unworthiness, I stand here in front of you, filled with boldness and hope for success in my ministry, as I firmly rely on the help of God, remembering the words of our Lord Jesus Christ: And surely I am with you always, to the very end of the age (Mt. 28:20), as well as: You did not choose me, but I chose you (Jn. 15:16). I accept this lot as from the right hand of God and as an expression of God's will expressed through your pastoral blessing.

Bp. Daniil’s biography from the website of the Bulgarian Church in America reads:

With the blessing of His Holiness Maxim of the Bulgarian Orthodox Church - Bulgarian Patriarchate and according to the decision of the Holy Synod, Bishop Daniil (Trendafilov Nikolov) of Dragovitsa has arrived in New York City to take up the position of Vicar to Metropolitan Joseph of the Bulgarian Eastern Orthodox Diocese of the USA, Canada and Australia. His Grace was born on March 2nd, 1972. In 1991 he completed his secondary education in his hometown of Smolyan; in 1996 he undertook studies in English philology at the State University in Sofia; and in 1997 he enrolled in the Theological Faculty of Sofia from which he graduated in 2002. In 1997 he became a novice of St. George Monastery in Hadzhidimovo, where on August 7th, 1999 he received the tonsure and the next day was ordained a hierodeacon. In 2004 he was ordained a hieromonk, and on July 1st, 2006 was elevated to the rank of archimandrite. On January 20th, 2008 he was consecrated to the sacred episcopacy and assigned as Vicar Bishop to the Metropolitan of Nevrokop. By a June 15th, 2010 decision of the Holy Synod of the Bulgarian Orthodox Church - Bulgarian Patriarchate he was appointed Vicar Bishop to the Metropolitan of the USA, Canada and Australia.