Belarusians also brave the cold to venerate their beloved St. Valentina of Minsk 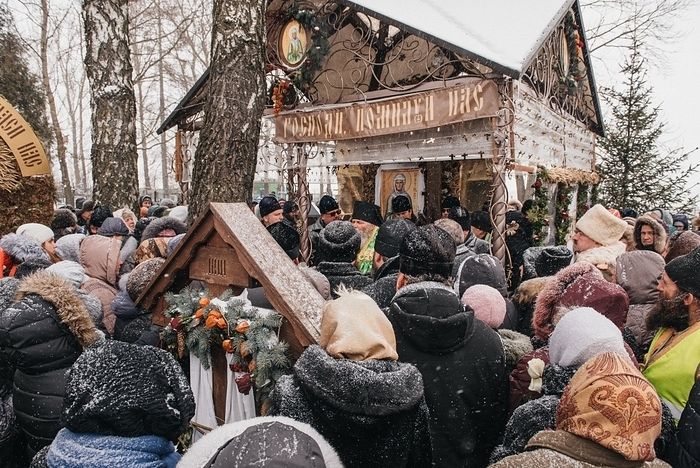 Earlier today we reported that Russians came out by the thousands yesterday, braving the winter’s heaviest snowfall, to venerate the relics of St. Ksenia of St. Petersburg on her feast day.

Pilgrims from all over Belarus also showed their devotion for their own beloved female saint who was also celebrated yesterday, St. Valentina of Minsk, enduring the freezing temperatures to venerate her holy relics in Krysovo Village, outside of Minsk, reports sobor.by.

Her grave has been a place of pilgrimage since her repose in 1966. She was known to have the miraculous gift of healing already during her lifetime. She was canonized by the Belarusian Orthodox Church in 2006.

A steady stream of pilgrims continued throughout the entire day to the village cemetery where St. Valentina is buried, covering the last 1.2 miles on foot, despite the freezing temperatures and hard frost. They walked with a prayer and with flowers, festively greeting one another along the way. Others traveled on the buses that arrived one after the other from throughout Belarus.

“The festal feeling truly soared through the air, and was reflected on the faces of the people—though they were slightly frozen, but joyful,” writes sobor.by.

Priests from various cities of Belarus served continuous molebens throughout the day as well, allowing all the pilgrims to participate in the holy prayers of the Church.

Several bishops of the Belarusian Church also came to venerate the holy wonderworker: Bishop Paul of Maladzyechna and Stowbtsy, Bishop Antony of Slutsk and Salihorsk, Archbishop Stephen of Pinsk and Luninets, and Bishop Benjamin of Borisov and Marinogorsk.

According to good tradition, the holy eldress’ canopy was wonderfully decorated by the pilgrims, with archival photos of Mother Valentina and her family hanging on one side.

At a late December session, the Council of Bishops of the Minsk Metropolitanate and the Diocesan Council of the Minsk Diocese resolved to begin collecting signatures in support of uncovering St. Valentina’s relics, in response to the repeated appeals of the faithful to do so. 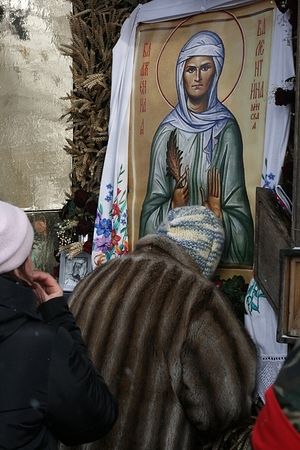 Photo: sobor.by
For more than fifty years, numerous pilgrims have been traveling to the tomb of St. Valentina of Minsk.

Mother Valentina, in the world Valentina Fyodorovna Sulkovskaya, was born in 1888 in the village of Koski in the Dzerzhinsky district near Minsk, into the family of a priest. The girl was very pious from childhood; she would raise her head to Heaven and speak with God and the saints. The first miracle performed by St. Valentina occurred when she was with her father in Kronstadt. The ship on which they were sailing into the city was on a collision course with another ship. Suddenly, before her appeared St. Panteleimon the Healer, ordering her to pray unceasingly, which St. Valentina did. The ships miraculously missed one another.

Before the First World War, Valentina married Fedor Sulkowski, who also came from a priest family. Even during her life, St. Valentina had the gift to heal people. Despite the fact that she was seriously ill and could not get out of bed, she did not refuse to help anyone. St. Valentina died in 1966, and in 2006 she was glorified by the Synod of the Belarusian Orthodox Church as St. Valentina of Minsk.

Blessed Valentina is remembered as a very kind, compassionate and pious person. She said that if you come to speak to her at her grave, as to one living, she will help the suffering. Now, from all parts of Belarus, and from countries near and far, numerous pilgrims come to ask for help at the grave of St. Valentina. She especially helps to heal heart diseases and infertility.