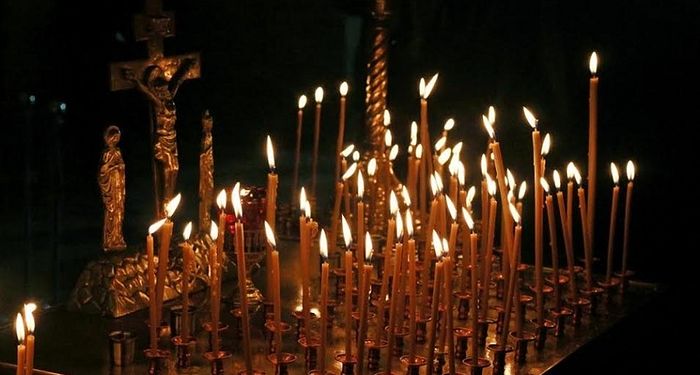 An armed criminal opened fire on parishioners leaving the Cathedral of St. George the Victorious in the city of Kizlyar in the Russian republic of Dagestan yesterday evening. The faithful had just finished the Rite of Forgiveness when they were fired upon, resulting in the deaths of five innocent women. Two other parishioners and two security guards were also injured.

The Orthodox Church calls upon its faithful sons and daughters to enter in upon the Great Lenten fast ever year with the Rite of Forgiveness, in which we ask one another to forgive us for all of our sins against one another, both voluntary and involuntary. Both entreating and offering forgiveness, we thus begin our journey to holy Pascha through Great Lent and Holy Week with purified hearts. The terribleness of the violence carried out against such Orthodox faithful is magnified in comparison with the holy act of peace that the victims had just undergone.

As the Lord Jesus Christ teaches, if we forgive men their sins, so our Heavenly Father will forgive us our sins.

The assailant was shot dead by police officers after he tried to escape. It has been established that the shooter was a local, born in 1995. The Investigative Committee of Russia has opened a criminal case under the articles of “Murder with aggravating circumstances,” and “The encroachment on the life of a law enforcement employee,” reports the site of the Russian Orthodox Church.

His Holiness Patriarch Kirill has sent his condolences to Archbishop Varlaam of Makhachkala and Grozny, and to the families and friends of the fallen parishioners, in which he called the murder of the innocents on the threshold of the church “a terrible and cynical crime, which does not, and cannot have, any justification whatsoever.”

“I pray to our Lord Jesus Christ for the speedy recovery of the wounded, for the strengthening of those who have lost family members, and for the repose of the innocent servants of God who were killed, Vera, Lyudmila, Nadezhda, Irina, and Vera in the dwellings of the righteous,” the patriarch’s condolences read.

His Holiness also instructed the clergy of the Makhachkala Diocese to provide any and all necessary assistance to the victims of the families.

Pat. Kirill has also expressed his deep shock at the incident, coming, surely by no accident, on the eve of Great Lent, and believes it is meant to provoke hatred between members of different religions that have managed to coexist peaceably in the Caucasus.

“The Russian Church expresses deep concern over this incident, and insists upon the most thorough investigation of the crime,” said Fr. Alexander Volkov, the head of the patriarchal press service.

For his part, Abp. Varlaam also called on “all the children of the Makhachkala Diocese to pray fervently for the souls of the innocent victims … and to offer fervent prayers for the health of the wounded.”

Among the victims were a well-known doctor and her sister who was a public figure who also helped a lot at the church, a former teacher who often organized pilgrimages, and a woman who would beg for alms at the church.

Hieromonk John (Anisimov), the secretary of the local diocese, noted that the churches were not protected, because, although there have been terrorist attacks in the area, there were never attacks on churches or clergy before.

Pat. Kirill served a litiya for the departed today in Christ the Savior Cathedral before reading the Great Canon of St. Andrew of Crete. Abp. Varlaam also served a litiya today in the Cathedral of St. George where the tragedy occurred, and met with the families of the victims, offering his prayers and consoling words.

Vasili4/13/2018 9:35 pm
Irina Sosikovna Melkomova is a Armenian-Russian hero. She should get a medal of the Hero of the Russian Federation. She should be a saint by now!