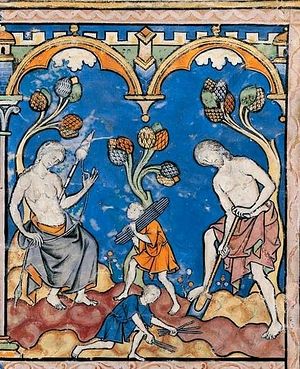 Photo: pravoslavie.ru
If there is one thing that is lamentably common in almost all feminist writing it is the apparent inability to reconcile the complementary concepts of ontological equality and hierarchical subordination. Briefly, if two things are regarded as ontologically equal then by definition one cannot be subordinate to the other. Thus, it is ceaselessly argued, because a wife is the ontological equal of her husband therefore it follows she cannot legitimately be subordinate to him; and any assertion of the subordination of wife to husband is regarded as an implicit denial of their ontological equality. The concepts of ontological equality and hierarchical subordination are not logically mutually exclusive and the combination is found everywhere around us, but the possibility of the combination is hotly denied by every feminist writer I have come across. It is odd and cries out for explanation; like an inability to rub one’s tummy and scratch one’s head at the same time.

Examples of the combination abound, including in the ad intra Trinitarian Godhead itself. Orthodox Christianity confesses both the ontological equality of all three Persons of the Trinity, as well as the monarchy of the Father (as it was called). There is a heretical subordination of the Son to the Father (as in Arianism, which the insertion of the homoousios in the Creed was designed to exclude), but there is also an Orthodox subordinationism which makes the Father the cause (Greek aitia) of the Son. In the words of the late John Meyendorff (in his Byzantine Theology), “The Cappadocian Fathers eliminated the ontological subordinationism of Origen and Arius, but they preserved a Biblical and Orthodox subordinationism, maintaining the personal identity of the Father as the ultimate origin of all divine being and action”. And this subordination of the Son to the Father can be found in the economy of salvation as well, for St. Paul writes that “God is the head of Christ” just as in marriage “the man is the head of the woman” (1 Cor. 11:3).   At the end also, in the age to come, “the Son Himself also will be subjected to the One who subjected all things to Him”—i.e. the Son will be subjected to the Father (1 Cor. 15:28). Clearly ontological equality is compatible with hierarchical subordination.

Such a refusal to allow the combination of the two complementary concepts is explicable in secular thought, which seems unable to progress beyond the concept of relationship as power struggle and which sees all things in terms of competing “human rights”. Liberal Protestantism especially has proven itself captive of such a narrow and unthinking secularism. But it is more perplexing to see such an inability to combine the concepts in Orthodox writers, who should be quite at home with the concept of a godly hierarchy. Saying (as one such Orthodox writer recently did) that “the subordination or submission principle subverts the unequivocal patristic teaching of the ontological equality of men and women” and that “the ancient Fathers of the Church, good philosophers and theologians that they were, saw the incompatibility between equality and subordination or submission” is simply nonsensical, and contrary to everything within Orthodox life. The Fathers held that women and men were ontologically equal, and yet they still insisted that the wife submit to her husband—largely because they could read the New Testament, which they considered to be authoritative. It was not just St. Paul who insisted on the subordination of the wife to her ontologically equal husband (Eph. 5:22f), but Fathers such as Chrysostom also: “Let us take as our fundamental position then that the husband occupies the place of the ‘head’ and the wife the place of the ‘body’” (Homily XX on Ephesians).

We see this combination of equality and subordination everywhere around us: in families children submit to their parents; in the army, Sergeants submit to the Generals; in a school, students submit to their teachers, and in a monarchy (such as Canada) subjects submit to their Sovereign. Life is hierarchical. This being so, we see this it also and especially in the Church: the faithful submit to their pastors (the bishop and his presbyters) though they are their ontological equals; the presbyters submit to their bishop. Since pretty much everything in our experience combines equality with hierarchy, why shouldn’t the wife also submit to her husband as St. Paul commands? At the very least responsible theologians should acknowledge that equality and subordination are not mutually exclusive. One often finds the terms “patriarchal” and “hierarchical” used as ideological swear words in feminist literature, but one would think that the Orthodox should be immune to such distortion of their traditional vocabulary. It is true that hierarchy can be misused, just as anything good can be misused. The misuse of a thing does not invalidate its proper use. Because Arius misused the concept of the monarchy of the Father to construct a heretical Christology does not mean that the monarchy of the Father should be abandoned. The proper use remains. It is Arius—and the misusers of the proper concepts—that must be abandoned.

One can only conclude that Orthodox writers who refuse to acknowledge the compatibility of ontological equality with hierarchical submission do so because they, like their liberal Protestant colleagues, remain prisoners of a secular ideology. It is significant that their protestations of the incompatibility of the two concepts require highly selective citations from the Fathers, and a virtual ignoring of the New Testament. That is because both the Fathers and the New Testament are replete with exhortations to hierarchical submission. These exhortations are simply discounted. An honest scholarship would admit this, and differentiate itself from the historical Faith of the Church. But that would mean laying aside the label of “Orthodox”, and this they are unwilling to do. It’s too bad—liberal or conservative, Orthodox or innovative, let us at least be honest and ‘fess up to our actual views. Debate is fruitful only when all of the debaters’ cards are laid on the table. Family Hierarchy
Grammar of Family Life, Part 6
Archpriest Pavel Gumerov
Archpriest Paul Gumerov speaks about how family roles should be distributed, who should be the head, what are the responsibilities of husbands and wives, what a wife should do if her husband doesn’t want to take responsibility for the welfare of his family, and how husbands can become true husbands. The European Left’s War On Christianity
It was an attack of unreasoning rage and unrelenting hatred on one of the world’s greatest symbols of love and peace, life and hope.
Comments

Rdr Andreas Moran3/3/2018 4:04 pm
Christ is Head but also the suffering Servant; He has glory but also submits even to the unjust; He Whom the disciples saw transfigured washed their feet. Headship and serving, authority and submission are not opposed but complementary: such is the Christian way. Fr Lawrence should have taken us further along in Ephesians, and St John Chrysostom’s homily for he says: ‘For what sort of union is that, where the wife trembles at her husband? And what sort of pleasure will the husband himself enjoy, if he dwells with his wife as with a slave, and not as with a free-woman? Yea, though thou shouldest suffer anything on her account, do not upbraid her; for neither did Christ do this'.

Jill3/3/2018 3:17 am
Fr Lawrence is asking for honesty in debate, for all the cards to be on the table. Yet he is conveniently omitting what St Paul says next in Ephesians about the place of a husband. Putting everything on the line, including his life, for his wife's sake. Submission by a different name.

A doctor or surgeon has perhaps the highest authority over another human being. He or she has the knowledge and skill to heal and to save lives. He has the standing and the power in the eyes of the public and the state to do these things, yet, at heart, he is, and must be, the servant of his patients, not their master.

Thomas Carney3/1/2018 10:37 pm
Now, as for Anthony's comment above, yes, the Antiochian Orthodox do allow altar girls, which will drive boys away from being altar boys and drive down vocations. When you consider the FACT that over 80% of priests start out as altar boys..... men cannot be women and women can't be men. By mixing the two, you drive boys away and prevent the seeds of vocation.

I'm Melkite, and while our bishop does allow altar girls (my parish does not), the altar girls are forbidden to enter the Holy Place behind the Iconostasis. Strangely, the parishes that allow altar girls have very few vocations and the ones that don't have them seem to have many, many more vocations. Same thing with Romans.

Thomas Carney3/1/2018 10:34 pm
Feminists do not have an inability to reconcile the complementary concepts of ontological equality and hierarchical subordination, rather it is a DELIBERATE REFUSAL to even acknowledge the differences. Feminists' true goal is the destruction and domination of men and masculinity. By mixing the roles, this has already undermined the foundations of masculinity. Anyone who has read high feminist literature will see this.

Anthony2/28/2018 3:05 pm
I remember going to an Antiochian Church in England once. They had girl alter boys!!! and the female sex used to go in and out the alter at will!!! It was all quite surreal. Never went back again. (They were all very nice people though; much nicer than the westerners of Hellenic origin that's for sure.)
×