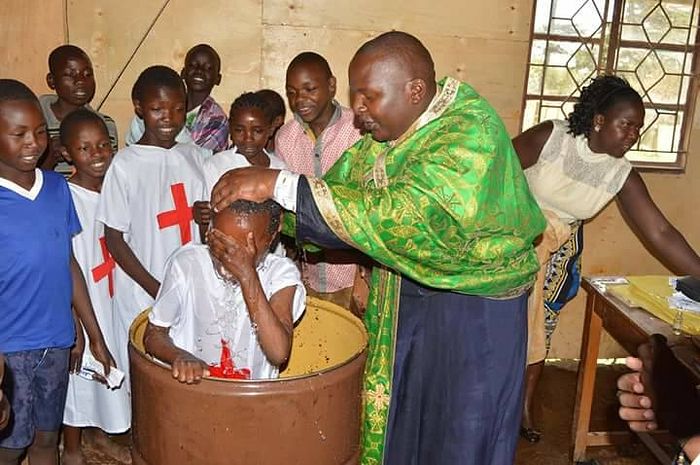 The sacrament of holy Baptism was celebrated for 35 children of the orphanage on February 18, after which they all partook of the Holy Body and Blood of Christ. Fr. Constantinos reports that this was the first such mass Baptism in St. Irene’s history. There are now more than 60 baptized children at the orphanage.

St. Irene’s was founded in 2010 by Fr. Constantinos and his presvytera Teresa Jepchumba. It currently has a population of 140 vulnerable children, 40 of whom are orphans who live entirely at the orphanage. The mission announced in January that it was able to acquire permanent land to house the orphans.

The mission is among those associated with Orthodox Africa, whose founder, Fr. Silouan (Brown) offered interviews to OrthoChristian.com both before and after his missionary trip to Africa in 2016. 11 children were baptized at the St. Barnabas Orphanage and School when Fr. Silouan returned in May 2017.

Learn how to get involved and help the work and children of St. Irene’s here.

Also, watch the community’s festive procession on the feast of the Triumph of Orthodoxy: St. Barnabas Orphanage and School: A Campaign for a Permanent Lunch Location 11 baptized at Kenyan orphanage during visit of “Orthodox Africa” charity director
The joyous occasion of the Baptisms came during the visit of Fr. Silouan (Brown), the founder and director of Orthodox Africa, which currently supports five missions in Kenya, and one parish in Uganda, with the goal of helping them achieve long-term sustainability.

“We are One in Christ:” The Missionary Work of “Orthodox Africa”
A Conversation with Fr. Silouan (Brown) on His Missionary Trip to Kenya and the Continuing Work
Jesse Dominick, Fr. Silouan (Brown)
Last July I sat down with Fr. Silouan (Brown) to ask him about his upcoming mission trip to Kenya, on behalf of the charitable organization “Orthodox Africa” he founded as a way for the global Orthodox community to be able to participate in the furtherance of God’s Kingdom by providing a means for the average layman who may not be able to travel to faraway lands, to participate in global missionary work. The organization works with several mission and shelters in Kenya. In this follow-up interview, Fr. Silouan shares his thoughts and reflections on the trip, how it compared to expectations, what he learned about how to better serve the people of Africa, and about the bond of Orthodox Christians worldwide, rooted in our common faith in our Lord Jesus Christ.
Comments
×