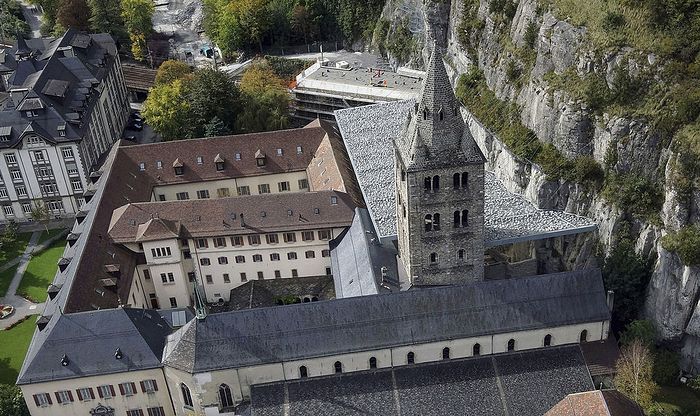 In a recently concluded deal, the Korsun Diocese of the Russian Orthodox Church has been given use of a church in the ancient Monastery of the Holy Martyr Maurice for a period of 20 years, reports the Korsun Diocese.

The Territorial Abbey of the Holy Martyr Maurice, who suffered at the end of the 3rd century together with the Roman Theban Legion he commanded during the persecutions of Emperor Maximian, is the oldest continually functioning monastery of Western Europe, founded in 515.

As a center of pilgrimage for both Eastern and Western Christians from antiquity, the abbey is a great holy site of the Christian world. According to ancient Church tradition, the monastery adheres to the Rule of St. Augustine of Hippo and is a territorial abbey, meaning the ruling abbot is a bishop, under whose jurisdiction the surrounding parishes fall.

With the blessing of Bishop Nestor of Korsun, and with the consent of the abbot and spiritual council of the monastery, services recently began to be held in the monastery by priests of the Moscow Patriarchate.

An agreement on the transfer of the monastery’s Church of the Holy Apostle James to the Korsun Diocese was signed on Wednesday by Abbot John (Scarsella), monastery steward Fr. Olivier Rodion, and Fr. Augustine Sokolovsky of the Trinity Cathedral in Paris.

According to the agreement on gratuitous use, the church is transferred for regular Orthodox services to the jurisdiction of the Korsun Diocese of the Moscow Patriarchate for 20 years (the maximum allowed by Swiss law), with the right to automatically extend the agreement.

Two other such agreements have been worked out for the Korsun Diocese’s use of Catholic parishes in Portugal since the beginning of the year. “Every Human Life is a Gift From God”. The Long Journey of a Swiss Catholic To Orthodoxy
Aviv Saliu-Diallo, Pierre Haab
Pierre Haab, a Swiss ex-Catholic who was disappointed with his religion and was carried away by Buddhism, Hinduism and other screamingly “fashionable” Eastern teachings and who is now a subdeacon of the Orthodox Cathedral of the Exaltation of the Cross in Geneva, speaks about his conversion to Orthodoxy. 25,000 Swiss citizens sign petition asking not to remove crucifixes from public places
It was the Der Neue R&#252;tlibund conservative Christian organization that proposed to file a petition of this kind in May 2016.