Songs of Light and Revelation 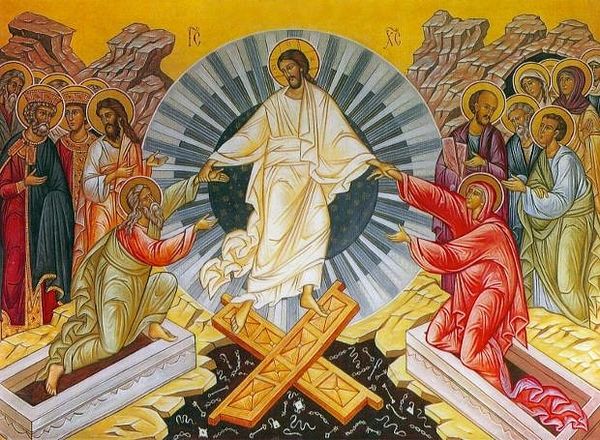 In the service of Sunday Matins (in Greek Orthros) of the Orthodox Church we find a series of eleven hymns called “the songs of light” (Greek exaposteilaria or photagogika), short stichs which summarize and describe the content of the Gospel chanted earlier during the service. Each one of these eleven Gospel readings offers a description of the post-Resurrection appearances of Christ to His disciples, starting with the appearance related in Matthew 28 and then continuing in chronological order with the appearances narrated in the other three Gospels. The Gospel hymn sung corresponds to the Gospel reading chanted. But these hymns do more than simply summarize the content of the Gospel readings and offer a kind of musical précis. They also reveal that Christianity is a mystery religion, in which the risen Christ reveals Himself to the initiated.

Today one needs to define what the Church means by the term “mystery”. In some contexts a mystery means something opaque to the intellect, something unknown—thus a mystery novel is a novel in which one does not know “whodunit” until the end of the book, and someone saying, “It’s a mystery to me” is confessing his ignorance of the subject at hand. But that is not how St. Paul used the term, or how the Church uses the term either. In St. Paul’s glossary a mystery (Greek mysterion) is a truth hidden from outsiders, but revealed to the initiated. Christ’s Gospel is “the mystery which has been kept secret for long ages past, but now is manifested” (Romans 16:25-26), the “mystery which has been hidden from the ages and generations but has now been manifested to His saints” (Colossians 1:26). The baptized Christians are those saints, the insiders, the initiated, the ones who know what had never been revealed before until God acted in Christ. We are bound to one another by joint possession of this secret knowledge—a secret knowledge which we are eager to share with the world.

Such an understanding of the term “mystery” was common in the ancient world, which knew of certain cults now called “the mystery religions”. There were degrees of initiation, and it seems that, at least in some of the mystery religions, there was a hierophant, a priest whose task it was show certain objects to the initiated, objects which would embody their new esoteric knowledge. The initiated were not supposed to disclose any of the details, and it seems as if they were successful in maintaining discretion, because modern scholars can now only guess at what it is they were told and shown. (The term “hierophant” means “a priest who manifests”—Greek phaino, “who makes something manifest”—Greek phaneros).

I suggest that such concerns undergird much of the material in the Songs of Light, so that they are also Songs of Revelation. Participation in a mystery religion bound its adherents together, including them in an invisible fellowship of the initiated—almost like a kind of secret club. The other initiated persons were therefore not just people with whom they happened to share an experience, but friends. The Songs of Light tell us that this is the way we should regard our fellow Christians—as friends, since each of us has become a friend of Christ. It is perhaps significant that the same St. John who reported that Christ called the disciples His friends in John 15:15 also used the term to describe Christians (3 John 14)—it is because Christ has made us His friends that we have friendship and loyalty with one other. And we have become Christ’s friends because He has revealed to us the mystery of His salvation and risen power.

To turn to a few examples: in the first Song of Light (which reflects the Gospel reading in Matthew 28:16-20), the author of the hymn bids us “go with the disciples to behold Christ with faith”—in much the same way as the initiated beheld the sacred object revealed by the hierophant. Further, Christ is portrayed as then saying to His disciples, “I shall be even unto the end of the age with those who know the Mysteries.”

This reference to “beholding” is also found in the second Song of Light as the “the myrrh-bearing women rejoiced at beholding the stone rolled away” and saw the angel seated upon the tomb. Again we find the image of the initiated seeing something that others have not seen and receiving secret knowledge as a result of it. This reference to beholding and receiving knowledge repeated in the fourth Song, with its reference to “learning of the rising of Him who reigns over heaven” and of “staying at the tomb to behold Christ”.

In the third Song of Light, we find another reference to the Eleven as those “who knew the Mysteries” as a result of Christ appearing to them. In the Song 5 we hear of special knowledge imparted through a private revelation to “Cleopas and his companion”, for Christ “opened to them the Scriptures” and revealed Himself “at Emmaus in the breaking of the bread”. Indeed, these Songs offer a variety of things that the disciples beheld which revealed the risen power of Christ—not just the angel at the tomb and the broken bread at Emmaus, but also the food which Christ ate with them (Song 6), the abandoned grave-clothes and head-napkin which Christ left behind in the tomb (Song 7), Christ’s “side and His hands” which He “showed Thomas” (Song 9), and the “bread and fish upon the coals”, which Christ “showed them” (Song 10).

Those who experienced these signs and beheld these secret sights were bound together in the friendship with one another and with the risen Lord. Thus in Song 2 the angel says that Christ will appear to them in Galilee “as He said to His friends.” In Song 11, Peter is not just “Peter” but “friend Peter”. The term “friend Peter” does not occur in the Gospel reading, and is therefore the more significant—it forms not part of the hymn-writer’s summary of the Gospel text, but of his thematic presentation of its theology.

Common to all these hymns is the image of the disciples beholding things which set them apart from those who had not seen them, and of receiving a secret knowledge of which the world was ignorant—i.e. the essence of mystery religions. In fact through the Church all Christians receive a knowledge which sets them apart, a knowledge which separates the Church from the World. But unlike the knowledge given to those initiated into the ancient mystery religions which they were told to preserve in secrecy, we are commanded to go and share. With the knowledge comes responsibility, and the evangelistic mandate to go and proclaim from the housetops what we have heard in the inner rooms. This mandate is given to us every Sunday we hear these Songs of Light, these exaposteilaria. After we hear these wonderful stichs, we are meant to go into all our world, the world of office water-cooler and school room and locker room, and share the revelation of Christ that we have received with those who share our world, and with those we love.

The Songs of Light for Sunday Matins are:

Song 1: Let us go with the Disciples to a mountain of Galilee to behold with faith Christ saying, “Let us learn to receive power over things above and below; to teach all the nations and to baptize them in the Name of the Father, the Son and the Holy Spirit, and, as was promised, I shall be even unto the end of the age with those who know the Mysteries.”

Song 2: The myrrh-bearing women rejoiced at beholding the stone rolled away, for they saw a young man seated upon the tomb, who said to them, “Behold, tell the Disciples with Peter that Christ has risen. Press forward to the mountain of Galilee; there He will appear to you as He said to His friends.”

Song 3: Let no man disbelieve that Christ has risen, for He appeared to Mary and afterwards was seen by those walking in the country and He again appeared to the Eleven who knew the Mysteries. Having sent them out to baptize, He was received up into heaven from whence He came down, confirming their preaching by a multitude of signs.

Song 4: Lightning-bright with the virtues, we see standing upon the life-bearing tomb a man in shining garments while the myrrh-bearing women bowed down their faces to the earth. Let us learn of the rising of Him who reigns over heaven and let us hasten with Peter to the Life in the tomb and, wondering at what had happened, let us stay to behold Christ.

Song 5: Christ, the Life and the Way, risen from the dead, accompanied Cleopas and his companion on their way and was made known to them at Emmaus in the breaking of the bread. Their souls and hearts were on fire when He spoke to them on the way and opened to them the Scriptures and the things He had endured. Let us cry with them, “He is risen and has appeared to Peter!”

Song 6: Showing that You are man in essence, O Saviour, You rose from the tomb and partook of food and stood in their midst to preach repentance. And You immediately ascended to the Father and promised to send the Comforter to the Disciples. O most-divine God and Man, glory to Your Resurrection!

Song 7: Mary said that they had taken the Lord away and Simon Peter and the other friend of Christ whom He loved ran to the tomb and they both found the grave-clothes lying alone and the napkin that had been around His head not with them, but in a place by itself. They therefore kept silence again until they saw Christ.

Song 8: Seeing two angels inside the tomb, Mary was struck with wonder and, not knowing Christ, she asked Him, (supposing Him to be the gardener,) “Where, O Lord, have You laid the body of my Jesus?” And recognizing by His call that He was the Saviour, she heard, “Touch me not, but tell the brethren that I go to My Father.”

Song 9: The doors were shut as You entered, O Master and You filled the Apostles with the Holy Spirit by peacefully breathing upon them; and You said to them that they would bind and loose sins. After eight days, You showed Thomas Your side and Your hands. With him we cry: “You are Lord and God!”

Song 10: At the sea of Tiberias, Thomas was fishing with the sons of Zebedee, Nathaniel, Peter, and two other disciples of old. Casting to the right at the command of Christ, they caught a multitude of fish. And Peter, recognizing Him, cast himself into the water. This was the third time He appeared to them and He showed them bread and fish upon the coals.

Song 11: After the divine Resurrection, the Lord, asking Peter three times, “Do you love Me?”, established him as chief-shepherd of His own sheep. Seeing him whom Jesus loved following in his footsteps, he inquired of the Master, who replied “What is this? If I wish him to tarry until I come again, what is that to you, friend Peter?” “Now the Powers of Heaven Do Serve Invisibly With Us…”
Alexei Kashkin
In this article, professor of the Saratov Orthodox Theological Seminary and author of the textbook The Typikon of Orthodox Worship Alexei Kashkin tells us about the Presanctified Liturgy. Explanation of the All-Night Vigil Service
Archpriest Victor Potapov
Not only did Christianity not abandon ritual, but in time, in its historical development, it established its own complex system of worship. Does this constitute a self-contradiction? Is not private prayer sufficient for a Christian?
Comments
×