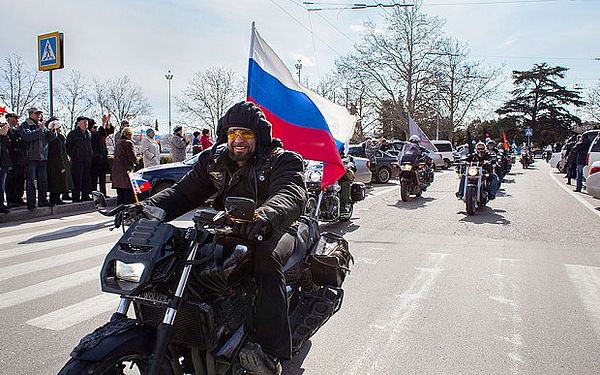 A cultural-historical tour designed to bring Russians and citizens of the Balkan regions together began in Serbia yesterday. The “Night Wolves” Russian Orthodox biker club is participating in the “Russian Balkans” tour, which includes visits to a number of Orthodox churches and monasteries, reports RIA-Novosti.

The tour is open to all and will travel more than 1,200 miles throughout Serbia and Republika Srpska-Bosnia and Herzegovina until March 28. The bikers and the other participants will pass through dozens of settlements and visit Orthodox churches and monasteries, as well as objects of military glory associated with the history of the Serbian and Russian peoples.

The Night Wolves is Russia’s largest biker club, headed by Alexander Zaldostanov. The club began in 1989 as a resistance to Communism, and when the Soviet Union fell in 1991, the Night Wolves started engaging in social activism to serve its community, especially young people, and became Christian along the way. Despite their focus on community activism, education, and faith, Zaldostanov is often demonized by Western media for having friendly relations with President Putin.

Unfortunately, Bosnia and Herzegovina authorities recently banned Zaldostanov’s entry, as well as that of the Serbian Night Wolves, Sasha Savic, declaring them a “threat to national security.”

However, both leaders have said that the tour will go on without them, reports Balkan Insight. Some media reports suggest the Wolves may meet Republika Srpska President Dodik, who awarded them on January 9 for their “particular emphasis on the affirmation of human rights, tolerance among people, the rule of law and freedom, and the strengthening of friendly relations between the Russian Federation and the RS.”

“Everything was wrongly twisted and distorted propagandistically… Our main theme in these events is Orthodoxy; we want more Russians to learn about Serbia, about other Orthodox countries, and for more Serbs, Montenegrins, and other people of the Orthodox world to join us,” said Evgeny Strogov, the chairman of the Federation of Motor Tourism of Russia, which is responsible for organizing the tour.

According to him, the “Russian Balkans” tour has taken place once or twice a year for more than a decade already, involving people from Serbia, Republika Srpska, Macedonia, Montenegro, and Russia. The goal is to bring various peoples together. “Hieromonks from the Holy Trinity-St. Sergius Lavra, the head of the pilgrimage service of New Jerusalem Monastery, and the Night Wolves come with us—a diverse composition,” Strogov explained.

The Night Wolves toured Greece in 2016 in conjunction with the millennial celebration of the Russian presence on Mt. Athos. They also toured Africa in 2016, distributing icons to the many parishes they visited. Russian bikers deliver icons to churches of the Moscow Patriarchate in Africa
The expedition lasted half a year, its participants covered 42,000 km