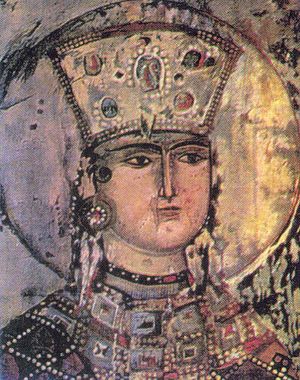 Photo: wikimedia.org
A group of politicians from the “Sakartvelos” party and faithful Georgian Orthodox Christians have addressed Georgian authorities, calling for a ban on condoms from the company “Aiisa” that feature blasphemous packaging.

According to party chairman Giorgi Liluashvili, the company makes products with designs and labels that offend the personal, religious, and national sensibilities of the Georgian people, reports Georgia Online.

The message was addressed to the President, Parliament Chairman, Prime Minster, head of the State Security Service, Minister of Internal Affairs, Chief Prosecutor, and People’s Defender of Georgia, as well as the Mayor of Tbilisi.

In particular, the company uses the images of revered saints, such as St. Tamar, members of the royal family, statesmen, politicians, and also Tbilisi’s “Mother of Georgia” statue, a beloved national symbol. They also blasphemously and mockingly make mention of Orthodox feast days.

The saints and theologians of the Orthodox Church have traditionally taught that the use of contraceptives is a sin.

The author of the statement to the authorities underlined that the products are fueling civil discord and strife and provoking tension and unrest in the country.

The Georgian Patriarchate also considers such things irreverent, stating, “Unfortunately, manifestations of insulting the religious sensibilities of the faithful and blasphemy have significantly increased lately,” reports The Union of Orthodox Journalists. A well-known television personality also caused a scandal recently when he spoke irreverently of the Lord Jesus Christ and His sacrifice on the Cross.

According to information from Liluashvili, Aiisa was financed within the framework of the state-encouraged start-up programs.

“We demand an immediate ban on this company, its founders and any employees from any commercial activity in Georgia, and to punish those partner organizations that developed the designs and implemented the production and sale of the company’s products,” Liluashivili writes.

In December 2016, Orthodox faithful in Russia successfully protested plans to build a condom factory near the Bogolyubsky Monastery in the village of Bogolyubovo. Faithful in Bogolyubovo prayerfully oppose condom factory near monastery
The village is considered the place of repose of the twelfth-century Russian prince St. Andrew Bogolyubsky and the cradle of Russian statehood, and locals are concerned for the holy site’s continuing legacy.

Justina3/24/2018 5:29 am
While it is totally inappropriate to use religious iconography etc. on the packages, the only reason Orthodox ever taught against contraception as distinct from abortifacient potions, was due to Roman Catholic influence sneaking in through the Russian seminaries that were taught by Jesuits from Catherine the Great's time.

The Ecumenical Councils' prohibitions are EXPLICITLY AGAINST ABORTION. not contraception per se. Augustine was another influencer who shaped both east and west in some errors, incl. the idea that a wife kept for love and eroticism not just childbearing was a "legal prostitute" but St. Paul advised everyone that would incl. divorced to marry to avoid fornication temptation
×