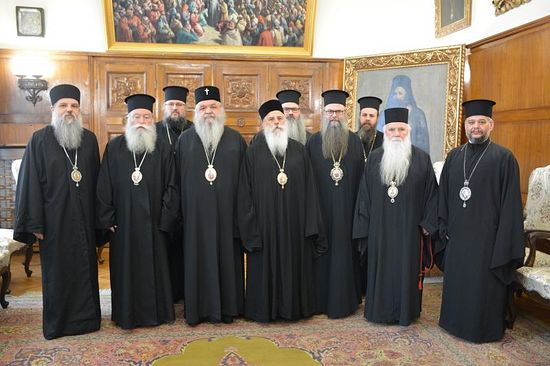 Committee members from the Bulgarian Orthodox Church and the schismatic Macedonian church at a meeting in Sofia in December. Photo: bg-patriarshia.bg

The official website of the Bulgarian Orthodox Church has published a statement from His Eminence Metropolitan Naum of Ruse, clarifying the Holy Synod’s stance towards the question of the schismatic “Macedonian Orthodox Church,” emphasizing that it will not cause a schism in the Orthodox world over the issue.

The Macedonian church had appealed to the Bulgarian Church in November to help normalize its canonical situation and become a recognized autocephalous Church. The Bulgarian Church agreed to help, which provoked negative reactions from the Serbian, Greek, and Constantinopolitan Churches.

The Church’s latest statement comes in response to controversy and protests that arose after the Synod announced that it would not send a delegation to participate in the Macedonian church’s celebrations for the 1000th anniversary of the Ohrid Archbishopric.

The decision got them branded as “national traitors” by some who want to see the Bulgarian and Macedonian Churches and nations draw nearer.

In the published statement, Met. Naum explains on behalf of the Holy Synod:

1. The hierarchs have never had the intention of abandoning its centuries-long history and canonical dignity as the successor to the historical Bulgarian Ohrid Archdiocese, regardless of the current political situation that has Ohrid within the borders of Macedonia;

2. The Synod did not send representatives to the schismatics’ anniversary celebration because that would, in fact, constitute a “national betrayal,” as participation in the event would be an implicit recognition of the Macedonian church’s pretensions as the successor to the historical Ohrid Archbishopric;

3. The Bulgarian bishops strive to preserve their national identity with dignity while also defending the canonical decrees of holy Orthodoxy, “not allowing any deviation from the unity of the Holy, Catholic, Apostolic Church;”

4. The idea that the Bulgarian Church could recognize the Macedonian church on its own without fear of a schism in the Orthodox world is deficient and underhanded, and not worthy of the dignity of Orthodox Christians;