Finding of the relics of St Basil the Bishop of Ryazan The Uncovering and Transfer of the Holy Relics of Saint Basil, Bishop of Ryazan (July 3), was done by Archbishop Theodoret of Ryazan (1605-1617). It pleased Divine Providence during the Time of Troubles to glorify Saint Basil. The uncovering of his relics and their transfer into the Ryazan-Dormition (afterwards Nativity) church in the Kremlin of Ryazan-Pereslavl took place on June 10, 1609. This had been the cathedral church from the time of the Ryazan bishop Jonah II (1522-1547). The relics of Saint Basil were placed in a reliquary at the left kleros, beside the iconostasis. A troparion and kontakion were then composed. From that time the name of Saint Basil was “commemorated throughout all the churches of the Ryazan diocese.” People had recourse to him as to “their constant intercessor, a helper in sorrow and peril.” Under Archbishop Moses (1638-1651), a stone crypt was built over the relics of Saint Basil in 1638, and over it was put the Murom Icon of the Most Holy Theotokos “the Supplication of Basil.” Photo: Хризма.рф
During this period services of thanksgiving to Saint Basil were served in the Ryazan churches. The first solemn celebration of the transfer of the relics of the saint took place on June 10, 1645 under Archbishop Moses. Especially fervent in veneration of the Ryazan hierarch was Archbishop Misael (1651-1655). By his command, in 1653, an inscription was made on a large silver vessel for the blessing of water, “This cup is from Ryazan-Pereslavl, in the cathedral church of the Dormition and the holy Passion-Bearers Boris and Gleb, and our Father among the saints Basil, Bishop of Ryazan, Wonderworker”.

In 1655 Saint Basil was depicted upon a silver cross together with Saint John the Forerunner and Saint Jonah, Metropolitan of Moscow. In 1712 during the time of Metropolitan Stephen Yavorsky, a stone chapel was constructed over the original burial place of Saint Basil, at the Borisoglebsk church , through the zeal of the clerk Nikita Altukhov. In the years 1722-1723 under Tsar Peter I a formal investigation of the saint was conducted, after which Saint Basil was depicted upon an icon together with other Russian saints. Metropolitan Demetrius (Sechenov) of Novgorod, during his time as Bishop of Ryazan (1752-1757) compiled the service to Saint Basil, “having in mind first of all the writing of the troparion, kontakion and canon”. 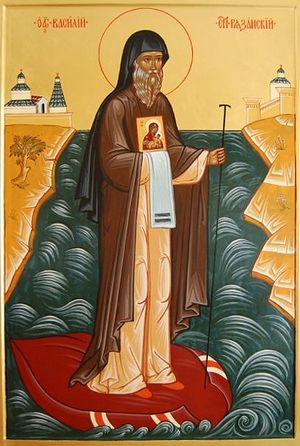 Photo: pravoslavie.ru
Through his efforts a new crypt was constructed over the relics of Saint Basil, containing a reliquary with an icon of the saint. In 1782 the reliquary was elegantly adorned by the Archbishop of Ryazan and Zaraisk, Simon (Lagova) (1778-1804). In 1810 under the Ryazan and Zaraisk archbishop Theophylakt (Rusanov), a decree of the Holy Synod was promulgated concerning the celebration of Saint Basil on the Sunday of All Saints. On October 4, 1836 a new memorial was unveiled at the spot of the uncovering of the relics of Saint Basil. It was set up through the zeal of the churchwarden of the Borisoglebsk church, Simeon Panov. In 1871, Archbishop Alexis (Rzhanitsky, 1867-1876) served the Divine Liturgy at the Borisoglebsk church on the Feast day of Saint Basil, July 3, for the first time.

Under Archbishop Palladius (Raev, 1876-1882) the Holy Synod in 1881 appointed the following days for commemoration of Saint Basil: July 3, the day of his blessed repose, and June 10, the day of the transfer of his holy relics. Even today, Saint Basil is especially venerated in the Ryazan lands. In each temple of the Ryazan diocese there is his icon. In the majority of the churches, moreover, is found a mural of the saint sailing along on the water on his mantiya with the Murom Icon of the Mother of God in hand. In the cathedral church each Wednesday evening an Akathist is sung to him. To Jerusalem on a Demon
Valeria Mikhailova

To Jerusalem on a Demon
Paradoxes and Historical Facts in the Life of the Holy Hierarch John of Novgorod
Valeria Mikhailova
As God did not desire to leave this man unknown in the fifteenth century, so in our times: Today St. John of Novgorod, longing for but one thing from his childhood—to be with Christ, is remembered and glorified in the Orthodox world.