The Faith of the Centurion In the name of the Father and of the Son and of the Holy Spirit. Amen.

Go thy way; and as thou hast believed, so be it done unto thee.

So the Lord said to the centurion. Just before this He had said,

I have not found so great faith, no, not in Israel.

So why did this man believe so and why did the Lord single out his belief?

In our world today when things are made to appear to be easy, belief is almost magical to people. They disassociate faith from their actions and life priorities.

Faith is not from magic. It’s not something that just appears. It is from the way we live.

This is what the Lord was pointing out. The centurion showed by his words and actions the kind of man he was.

So he comes to the Lord. He has a servant who is sick. He asked Him to heal him. That’s all he asks; he does not ask Him to go to his house or anything else, because he knows that the Lord can heal.

Why does he know this? He knows this because of the way he lives.

He tells the Lord: I am a man under authority; I say to one of my soldiers: Do this and he does this; go here and he does go; to my slave, go and he does it.

He knows that when under authority you should do what you’re told. How would he know this unless he does it himself?

Confidence in our prayers comes from the way we live, brothers and sisters. If we don’t live a righteous life, if we’re not obedient, then when we pray to God, we will not have confidence.

Now, understand, this is not a matter of being completely sinless. No man is sinless.

This is a matter of:

How do you live your life?

What are your priorities?

What’s important to you?

This soldier was considered by the Jews to be a pagan, since he represented Rome to them, even though he believed in the true God and read the Jewish writings. A Jew could not go into a pagan’s house or he would be defiled. So the centurion didn’t want the Lord to come to his house because the Lord, being a Jew would be ritually defiled. And of course the centurion was humble enough to state this plainly.

Sometimes we try to manufacture humility by putting our eyes down to the ground and by bowing to people and by, saying things that appear and sound to be humble.

Humility isn’t what we sound like or how our eyes look.

Humility is recognizing that without God we can do nothing and with God we can do everything. And we are unworthy of His love but He loves us and He will help us.

It seems to be a bit of a conundrum or riddle. Being more aware of our unworthiness, we are more confident? Absolutely. Because the person who is aware of their unworthiness is living a worthy life, or relatively worthy, shall we say. We are all unworthy.

It’s the same with us.

There are things in our lives, each one of us, that are difficult. People we care about, situations that are not what they should be, and also, of course, our own sins and our own weaknesses that we wish we can be unburdened from.

Oh, yes, each one of us would like the Lord to say to us that what we believe is accomplished. But that’s only if we believe. 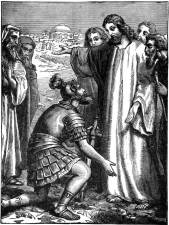 Healing of the centurion's servant, an ink drawing from"Project Gutenberg's Mother Stories from the New Testament" - http://www.gutenberg.org/files/17163/17163-h/17163-h.htm http://www.orthodox.net/ikons/miracle-healing-of-the-centurions-servant-02.jpg
This is the great unheard, hidden story now of Christianity in our age. You can redefine God to be anything you want nowadays. He can allow anything and everything, except believing that there is sin.

But internally, the soul knows.

And so when we pray and we feel lacking confidence, this is because of the way we live, of our priorities.

Let’s take a lesson from the centurion. He understood authority because he was obedient to authority, so it was easy for him to believe that the Lord, who has authority over all things, could do what He wanted him to do, even though he knew himself to be unworthy.

Do you see the key here?

The key to faith is: You have to live according to the things you say you believe.

Let us be men of faith, let us live according to our faith. Then we will have confidence. God Is Not Far Away!
Fr. James Guirguis

God Is Not Far Away!
Fr. James Guirguis
God’s grace is something that we speak of but do we realize that this energy and healing presence of God is very near to us? "You have no faith"
Fr. James Guirguis

"You have no faith"
Fr. James Guirguis
In today's gospel we are witnesses to another encounter of Jesus with a family that has suffered. A father has just brought his son to the Lord Jesus because he is an epileptic who “suffers terribly”. This father has to bring his son to Jesus Christ because the Lord's disciples had failed to heal the boy. After the Lord has healed the boy, the disciples are curious as to why He was able to heal when they were unable to do so. Jesus' answer to them is also an answer to many of our problems “because you have no faith.” The Centurions’ Intercessors
Fr. Patrick Henry Reardon
To see how this “works out,” let us return to the story of the centurion pleading on behalf of his servant. If we compare the differing accounts of this event in Matthew and Luke, we first observe that Matthew’s is the shorter and simpler version. In this account the centurion simply goes to Jesus, requesting that the Lord speak the commanding word, so that the servant will be healed.
Comments
×