What If You Planned a Party and No One Showed Up? 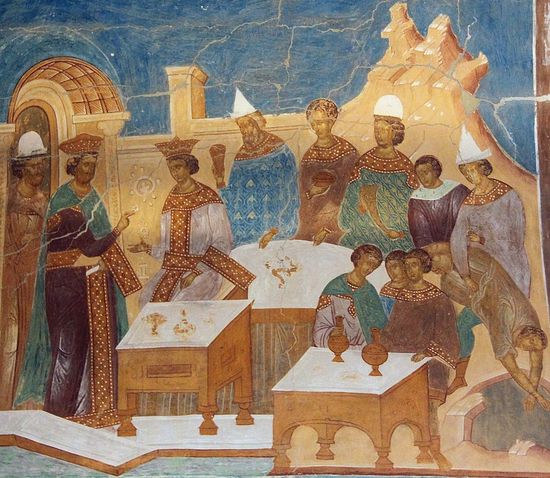 You did not choose me, but I chose you and appointed you that you should go and bear fruit and that your fruit should abide; so that whatever you ask the Father in my name, he may give it to you. This I command you, to love one another.  (John 15:16-17)

The Gospel lesson in  Luke 14:16-24 (**the text of the parable is at the bottom of this post) offers us the parable of the man who planned a formal supper and sent invitations to those he really wanted to attend. This lesson occurs at a time when Jesus offers some practical advice to His followers about proper behavior.

In 14:7, the Gospel says Jesus told them a parable, yet what follows in 14:8-14 isn’t a parable at all, but direct advice in vs. 8-11 about how to behave humbly when invited to a wedding reception: not to sit down at the head table and then be asked to move because you don’t belong there, but rather to make oneself obscure and let the host invite you in front of everyone else to sit at an honored place. The humble will be exalted, but the prideful will be brought low. The text reads like an Emily Post etiquette manual.

Next, in 14:12-14, Jesus advises his followers not to plan dinner parties with a guest list of people to whom you are indebted or people you want to make indebted to yourself. Don’t invite friends and families who will then reciprocate and invite you to their dinner parties. Rather, invite people who cannot repay you – the poor, needy, the homeless, the unemployed. Here, Jesus is teaching from the point of view of the up-side-down Kingdom of Heaven. You will be blessed by offering hospitality to those who can’t repay you in the Kingdom of Heaven.

Immediately upon hearing Jesus teaching, someone shouted out: “Blessed is anyone who will eat bread in the kingdom of God!” Perhaps it was one of the poor who realized that they would certainly benefit if the values of the Kingdom were lived in this world. If we did on earth what is done in heaven, God’s will would be done. Maybe most of those listening to Jesus just sighed, thinking that you can’t really invite all these unwanted people to your dinners, because you are obligated to invite those who invite you. We all go to such events, we put them on our calendars, even if we don’t really want to go because we feel the social or familial obligation. Of course, then we are really being hypocrites but we don’t want that exposed either and usually force ourselves to go thinking it is politically correct.

It is only at that point that Jesus tells the parable already mentioned in 14:7. The parable tells about a man who sent invitations to those he wanted to attend his special dinner party. The supper is not open to just anyone, but is by invitation only. What kinds of people do we invite to such parties? Usually we invite friends and family members who have invited us to their dinners. We owe them. We also invite special friends and family members who we feel particularly honored to have them in our homes. We feel some indebtedness to them when they grace us with their presence. Perhaps we want to impress others with who is willing to attend our dinners. We also may invite some we want to be indebted to us – people we hope will then feel obligated to reciprocate our invitation and will have to invite us to their parties. The system of invitation to dinners becomes largely an exchange of paying off debts or indebting others to us. It is all mutually self-serving.

In our culture, parties and gift exchanges are often about maintaining a balance, everyone “owes” everyone else and you keep the peace and the balance by doing your part to equally pay back everyone else for their efforts. Everyone is held indebted to everyone else by the feelings of reciprocal payments. If we have a wedding, often the guest list is at least partially based on who invited us to their wedding. Jesus challenges this system of social payback. Even sinners know enough to do this for their friends and family (Luke 6:32-34), but the Kingdom people are to live by the values of the Kingdom not the social values of this world. Just as Christ came to call the sick and sinners to Himself, we could do the same.

Remember in Luke 14:12-14, Jesus has already given the direct teaching not to engage in this social mutual exchange, but rather to give freely to those who cannot repay you. Give and expect to get nothing in return (Luke 6:35). The blessedness of the Kingdom comes not in repaying others for the kindnesses they do to you, but to extending hospitality and grace and goodness to those who could never repay you. Here Jesus is clearly saying, don’t behave just like everyone else. Your behavior as citizens of the Kingdom has to be better than what any sinner would do. Sinners will repay sinners expecting the same again.

Now, the unexpected happens in Jesus’ parable. The man carefully plans his invitation list, and invites only those he wants at this dinner – no doubt those he wants to impress or be impressed and those to whom he is socially indebted or whom he wants socially indebted to him. But on the day of the big party, no one shows up. NOT ONE!  All have excuses about other things they would rather do (though claiming they needed to do them). So, what do you do if you plan a dinner party and not one of the invited guests decides to come?

Of course there is an initial reaction of anger, because you would feel betrayed, or dissed or embarrassed. You wouldn’t want anyone else to know that absolutely no one showed up to your party. The message is clear – no one wants to be indebted to you, no one wants reciprocal payment from you for what they gave you.

For this man in the parable, there is a sudden realization that the whole system of mutual invitations which keeps the social structure together and keeps people at peace with one another because of mutual indebtedness has collapsed. And though he initially feels angry, he doesn’t directly act against those who have offended him. Instead he is moved to do what Jesus had taught we should do – he opens his party to the poor, the homeless, the unemployed, the undesirable. He even goes further, just to have every seat at the party filled, he drags in the dregs of the earth to feed them. Whereas he wouldn’t have done that voluntarily, he does it to show his invitees that he cares nothing about indebtedness to them or their indebtedness to him. He won’t be held hostage by the values of the world but rather will live by the values of a different Kingdom. Their rejection of his invitation has freed him to act according to totally different set of values. And though God loves the cheerful giver, God can bless and accept our gifts to the poor even when our motives are muddied by our emotions.

Or maybe he recognizes that all the proper social protocol of “gift exchanges” is ridiculous. People on the high social plane keep repaying each other by attending their events even when they have no interest in them. Social obligation becomes a burden which we hate.   The man is freed of such social obligations, now he can feed people who can’t provide food for themselves. Instead of buying more gifts for people who already have everything they want, we give to those who really need something.

Of course nothing that he did would endear him to those who rejected his invitation. Perhaps they would even stop inviting him to their events if he was going to behave in such a crazy manner.

**Luke 14:16-24 –
Then He said to him, “A certain man gave a great supper and invited many, and sent his servant at supper time to say to those who were invited, ‘Come, for all things are now ready.’ But they all with one accord began to make excuses. The first said to him, ‘I have bought a piece of ground, and I must go and see it. I ask you to have me excused.’ And another said, ‘I have bought five yoke of oxen, and I am going to test them. I ask you to have me excused.’ Still another said, ‘I have married a wife, and therefore I cannot come.’ So that servant came and reported these things to his master. Then the master of the house, being angry, said to his servant, ‘Go out quickly into the streets and lanes of the city, and bring in here the poor and the maimed and the lame and the blind.’ And the servant said, ‘Master, it is done as you commanded, and still there is room.’ Then the master said to the servant, ‘Go out into the highways and hedges, and compel them to come in, that my house may be filled. ’For I say to you that none of those men who were invited shall taste my supper.’” The Parable of the Wedding Feast
Archpriest Victor Potapov

The Parable of the Wedding Feast
Archpriest Victor Potapov
The Pharisees constantly said that the Jews are God's chosen people and that the coming Kingdom of God is intended only for them. The people got so used to this prejudice that it was offensive to them to hear in the parable of the workers in the vineyard... The Threshold of the Eternal Feast
Archpriest Alexander Shargunov

The Threshold of the Eternal Feast
A Homily for the Third Sunday of Pentecost
Archpriest Alexander Shargunov
The Lord speaks today such beautiful, wondrous works about how man should live, pointing to the birds of the heavens, and to the lilies and grass of the fields. Love: The Power of Christian Leadership
Fr. Ted Bobosh
In Fyodor Dostoyevsky’s “Legend of the Grand Inquisitor” from his book, The Brothers Karamazov, we encounter contrasting and conflicting images of religious power.
Comments

Anthony12/30/2018 10:49 am
Hi. Rejoice! Not wishing to be argumentative with our beloved Fr Theodore, but I think this parable refers to the Liturgy as the Great Banquet. Christ invites us all, but do we accept His invitation? Οχι! We make excuses week after week for not attending. So ultimately, if we don't want to attend His Great Banquet and give thanks whilst we are still in the land of the living, then we shouldn't expect to attend His banquet in the next life either. That which we sow here, there shall we reap. And I say again Rejoice!
×