His Eminence Metropolitan Nikolaos (Hatzinikolaou) of Mesogaia and Lavreotiki, Chairman of the Committee for Bioethics of the Holy Synod of the Greek Orthodox Church, a former physicist and NASA employee, and later an Athonite monk, speaks about Athonite traditions for celebrating the Nativity of Christ. 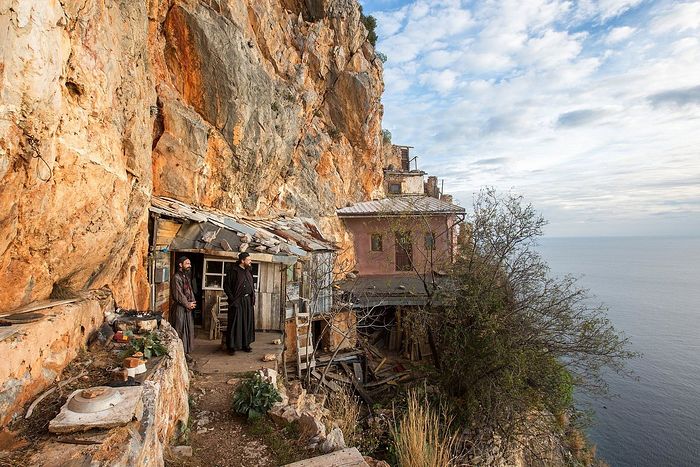 —Your Eminence! Where, in your opinion, is the highest point on earth?

—I understand that your question is connected with the title of the book I wrote about the Holy Mountain, about my experience living there. Of course, it’s a figure of speech: “The highest point on earth” can be a cemetery, or perhaps an airport, a hospital, a place of joy, or a church, and the highest point on earth can be the Holy Mountain, a place of meeting with Christ. Inasmuch as we’re talking about the Nativity of Christ now, I truly experienced a wondrous Nativity on Athos in 1988; it is unforgettable for me.

There’s another book, Recollections From the Garden of the Theotokos, by one wonderful man, about how he celebrated Nativity, if I remember correctly, in 1940, in the desert. I’ll say that in Athonite monasteries, there is no idea of decorated Christmas trees, of a boring and sumptuous variety of endless treats and gifts, and Christmas carols. But there is something else, completely devoid of this idea. And, of course, some may ask: “How can you celebrate Nativity without these familiar external attributes?” I assure you: Such a Nativity transports you to another world.

In the monastery where I lived on Mt. Athos, Christmas Eve is a day of strict fasting: There is no trapeza after the service, but the cellarer distributes, as prescribed in the charter, small pieces of blessed bread and figs. Honey is served, and everyone can take a spoonful of honey. On Christmas Eve, man exists in anticipation of thоse dishes of the following day that come, of course, with the good meal at the end. The fathers sing glorious songs in a slow chant; everyone remains motionless in his place, and after the service everyone leaves the church and goes to eat, after which they depart to their cells.

In my book I mention a story about ascetics that I read and was very inspired by—about celebrating Nativity in the cave of the Nativity of Christ in Karoulia. It’s a remote place. You can reach several of the cells along the hanging chains or climb the steps, fortified in the rock at an angle of ninety degrees. It’s dangerous! And a young man describes his experience: He was a layman then and went to a famous Athonite spiritual father to see how he celebrates Nativity. In the evening, ascetics began to descend—one on the chains, another down the steps, a third leaning on the rocks. Reaching the place, they crossed themselves, made a prostration, went inside, to the church, that is, into the cave itself, and sat in anticipation of the Vigil. There was nothing else there but the anticipation of the Vigil! And the Vigil began. These ten people lived in a purely spiritual atmosphere.

One of the fathers didn’t even have shoes, his feet were wrapped with burlap. He was very cold and the night was freezing. He went close to the stove (there was a wood stove there) and didn’t notice that the burlap caught fire. There’s a comment in the story: Three younger monks rushed towards him and extinguished the fire, while the elderly monks were so immersed in prayer that they didn’t notice anything. The young man was inspired by this: He saw how someone can experience events mystically, going behind the bounds of human sensations. When the Vigil finished, they sat and drank a cup of coffee, then there was a modest meal of rice and salted cod brought from the brothers’ skete. Then they all gave thanks and left. That was the whole feast! Nothing else! Serving God and trying to meet Him. A great deed!

—I have heard many stories about the power of prayer. Have you personally met God in prayer?

—It’s not just on the Holy Mountain that you can meet God. God can be met in various circumstances: In the face of the poor, in the feeling of great joy or deep sorrow, in helpless situations, in a seemingly overwhelming blessing. But to meet and recognize God, we have to have a little genuine suffering and humility. I wish everyone to feel that it’s the greatest thing that faith gives—a meeting with God—His presence in our lives—and nothing else in the world!

—The Bethlehem star—is it a reality?

—In the Evgenidion Planetarium [in Athens—OC], a whole show on “the brightest star of the Nativity” was presented—whether it was a comet, or the flash of a supernova, or a constellation. Everyone agrees that it was a supernatural event. Origen and St. John Chrysostom (they weren’t composing books about astronomy) saw in it an unusual phenomenon. St. John Chrysostom writes that it was an angel, wanting to say that something unprecedented happened.

—The Three Wise Men with their gifts found their way?

—They found their way, but it was something different. They didn’t find their way on earth. They found their way to God. They sought something different. In my life, I have also sought and found this star. I won’t hide it: I am happy that I appeared in this world, in this life. I am the third child in my family; two were born before me—I could have been not born. I am happy not because I studied, had the opportunity to earn money, met exceptional people, but because I was given the chance, through a genuine, mystical experience of God, which the Church gives, to feel His presence in my life.

Metropolitan Nikolaos of Mesogaia and Lavreotiki
Translated by Jesse Dominick Homily on the Nativity of Christ
Metropolitan Athanasios of Limassol
The meaning of this feast day for us, who are constrained by the passions and sin, lies in the obtainment of freedom, which the Lord has given us through His birth; to be freed from slavery to sin and the darkness of our falling away from God, and also to again be able to experience rejoicing in life as true children of God. Anthony1/12/2019 12:34 pm
Εύγε σεβασμιότατε μεσογαίας! I greet you! I kongratulate you! I don't know about you guys but what I find so interesting is how people such as His Eminence from our beloved Hellenic Motherland can rise to the heights of human greatness and yet at the end of it all none of this worldly nonsense can ever satisfy them in the way that coming to Orthodoxy does. And yet at the same time there are rotten traitors who have always 'been in the Church', and yet want to destroy the perfection of Orthodoxy through their attempts to unite with filthy heretics. Anathema! https://www.triklopodia.gr/θλιβερα-παρεπομενα-στην-ετησια-θρον/#
×