On Struggling with Vanity

In the evening of February 25, 2015, Wednesday of the first week of Great Lent, His Holiness Patriarch Kirill of Moscow and All Russia served Great Compline with the Great Canon of St. Andrew of Crete in the Church of the Resurrection of St. Andrew’s Monastery in Moscow. He offered the following homily at the end of the service. 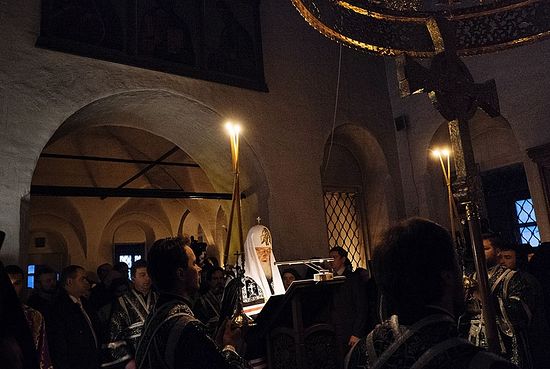 During Great Lent, every Christian who consciously and responsibly relates to his spiritual life is called to learn and discover much within himself. And this happens when we embark upon the path of self-knowledge, when we try every day to understand the movements of our soul and the cause of this or that thought, word, or action. And at the center of attention of someone who is trying to understand himself should be not the virtues he performs but his shortcomings and sins.

That is why the Holy Fathers pay so much attention to explaining basically every sin that we suffer from. And a very significant place is given to those sins in our everyday lives that most people don’t consider to be sins. Moreover, many people do not know that this or that inclination, this or that manner of behavior is a sin.

This is directly related to sins like vanity. In our time, this sin is becoming quite common, all-pervasive. This is largely facilitated by the development of the mass media, what we now call the information society. Everyone has the chance to say something that will be known to many, including through social networks. But if we look more carefully at what is happening in these spontaneous discussions, we can see a market of human vanity. Their goal is not so much the search for truth as presenting ourselves as more intelligent, more resourceful, more insightful than others. Sometimes people, not ready to participate in all of this, fall into the grindstone of such discussions where many people participate to show themselves off, and certainly not to find truth. Many consider these people weak, others—outdated, not possessing the skills and means for informational warfare. But in fact, usually they’re people who don’t want to play according to others’ rules.

But this is not relevant only to the particularities of our life in the information society. Quite often there is such a high degree of human vanity in politics, economics, art, and culture that it overshadows people’s real achievements. It’s amazing, the vanity of a man is the last thing he himself realizes. Attentive observers see and understand this human weakness. Some have a lenient attitude towards it, and some condemn it. But a vain person is always weak, vulnerable, and sinful.

What is vanity? St. Basil the Great says a vain man is he who speaks and does something only for the sake of human glory. Attentive to the spread of this sin among monastics and among Church people in general, the holy hierarch says that vanity is nothing other than an action not in the name of love for God, but in the name of human praise. 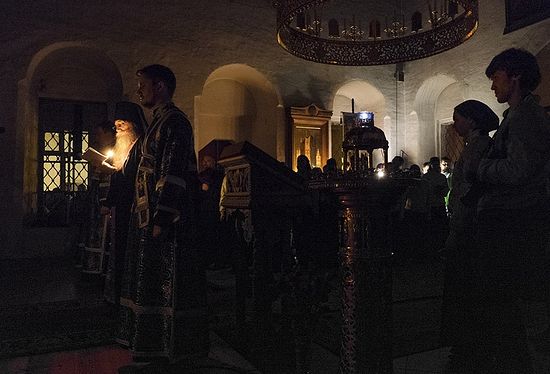 Indeed, in Church circles, sometimes even Lent itself, the strict discipline of Lent, the way of life, suddenly turns into an object of vanity. And often people drawn into this sinful element cannot imagine that we’re not talking about some pure podvig for the sake of the Lord, but about vanity, motivated, according to St. Basil, by the desire for human praise. Firstly those people who are capable, talented, successful, and strong, including in the spiritual life, are prone to vanity. St. Maximus the Confessor amazingly accurately observed that strong people, able to repel carnal temptations, suffer from vanity. Confronted face to face with some carnal temptation, they manifest courage and fortitude, integrity, and fidelity to their calling and don’t give in to the temptation. But the subtle poison of vanity penetrates into the soul, or, as St. Basil the Great says, subtly touches the consciousness, destroying the purity of intentions and actions.

And what is the result of vanity? St Ephraim the Syrian wonderfully says that fasting, vigil, and alms are all stolen by the devil because of vanity. The strength of this sin is such that it can destroy the results of a strenuous spiritual life, of a lifelong spiritual podvig. Man works on himself, he tests his conscience, he controls his thoughts and actions, educates himself, takes up fasting, prayer, and does good deeds, and at some point it suddenly becomes clear that vanity destroys the results of this entire lifelong podvig.

Speaking on the subject of vanity, St. John Chrysostom says, with his characteristic hidden irony and clarity of thought, a very simple phrase: There is no point in being vain because God knows everything. Vanity can be hidden from someone, it can disguise his motives, the reasons for this or that good deed, but it is impossible to hide anything before God—He knows everything. And if He knows everything, then why walk the path of vanity, ruining even the good fruits of your life?

The Holy Fathers offer ways of combating vanity. In St. Maximus the Confessor we also find very simple words and advice: Nothing destroys vanity like secret virtue and frequent prayer. And if someone, having understood in his heart, feels that this or that action occurs not because he is moved by good will or the desire to please the Lord and fulfill His will, but these actions are determined by his vanity, then he should begin to secretly do good deeds, so not a single soul knew about it.

Then everything becomes clear. If these good deeds are done with ease, with joy, it means you have embarked upon the path of correction. If it is unbearably painful to hide your emotions, if you have the burning desire to share with someone, to tell someone, to write about it somewhere, to post it in the information space, it means vanity has sprouted through the human soul so much that it has turned into a dangerous malignant tumor.

St. Maximus the Confessor’s second counsel is to pray often. It doesn’t mean we have to say protracted prayers during the day, but it means that the phenomenon of prayer should always be present in our daily lives, at least momentary prayer, an appeal to the Lord, repentance, a supplication, praise for God. The more often we pray, the more we will give secret alms, and the less danger there is of destroying all our good deeds and intentions by the power of vanity.

I congratulate you all with the completion of Wednesday of the first week of Great Lent. May the Lord grant us to complete the first week, and the entire Forty Days, in salvific peace. St. John Cassian’s Institutes: Gluttony
St. John Cassian
How the occasions of these faults, being found in everybody, are ignored by everybody; and how we need the Lord’s help to make them plain. Questions and Answers About Great Lent
Archpriest Victor Potapov
We present for your consideration responses to several questions that come up in connection with the podvig of Great Lent. The First Week of Great Lent: More Pastoral Advice
Lent is a time of conscious effort, which helps us acquire another view on the world—that which the Lord calls the Kingdom of God within us.
Comments
×