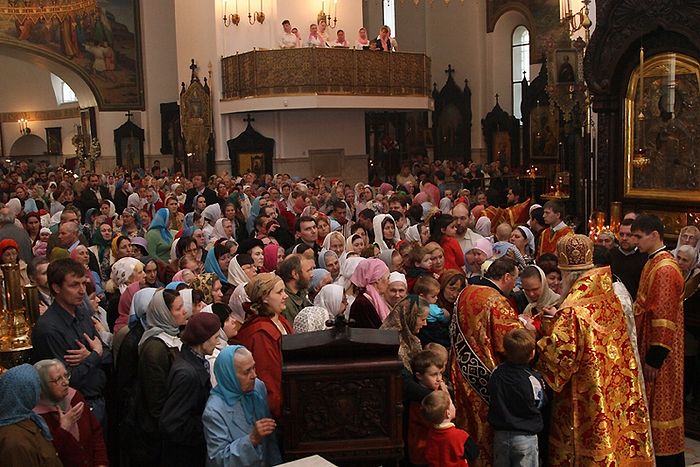 I suppose that the adjective “Pentecostal” in the title should be placed in scare quotes, because by “Pentecostal Orthodoxy” I do not refer to a combination of Protestant Pentecostalism and Orthodoxy, but that Orthodoxy itself is essentially Pentecostal. In his book The Orthodox Church (then) Timothy Ware described the Orthodox Church as “a continued Pentecost”, and as “the temple and dwelling place of the Spirit” so that those who dwell in her partook of that Holy Spirit through the sacrament of baptism and chrismation.

What does Pentecostal (or true) Orthodoxy look like? I suggest that it contains at least five ingredients.

First of all, a Pentecostal or true Orthodox will come to Sunday morning Liturgy with the expectation that at that Liturgy God will pour out His Holy Spirit upon the Orthodox there assembled. We see this expectation as early as St. Clement of Rome who wrote a letter to the neighbouring Corinthian church at the end of the first century. In the opening part of his letter, he contrasts the Corinthians’ present lamentable condition with their former laudable one. Clement writes, “You were all distinguished by humility…Content with the provision which God had made for you, and carefully attending to His words, you were inwardly filled with His doctrine, and His sufferings were before your eyes. Thus a profound and abundant peace was given to you all, and you had an insatiable desire for doing good…”

This is, I suggest, a picture of their Sunday morning worship: they came to Liturgy in humility and with spiritual hunger; they all carefully attended to God’s words in the Scripture readings and in the sermon, and all partook of the Eucharist, after the Anaphora had been said wherein “His sufferings were before their eyes”. Then Clement added the words: “…while a full outpouring of the Holy Spirit was upon you all”. It was during their time of Sunday worship that the Holy Spirit was abundantly poured out upon them. Clement writes as if this outpouring were the crown and goal of their worship, which of course it was. It remains the goal of our Sunday worship as well. We should go to Liturgy with the expectation of getting spiritually drenched.

Secondly, a Pentecostal Orthodox will come to all the Church’s liturgical worship to pray fervently, not simply to listen to a concert provided by the priest, deacon, and choir. When the deacon begins his litany by saying, “In peace let us pray to the Lord”, he is not addressing the choir alone, but everyone in church. That means that everyone in the church should respond with prayer, loudly and (hopefully) tunefully. One can pray fervently and quietly, but fervency is usually expressed in volume. (I may add that if one sings badly out of tune, praying quietly is recommended as the path of charity.) It is too easy to let the clergy and the choir do all the praying while simply standing in pious silence and letting the mind wander. The beautiful music, the iconography, the smell of incense will inevitably make their impressions on the senses and stir pious feelings, but worship is not about feelings. It is about prayer and self-offering. Feelings rarely induce spiritual growth; prayer and self-offering do.

Given the wonderful music settings available and the rich complexity of the liturgical rubrics, it is tempting to define “a good service” as one in which the music sounded professional and all the rubrics were faithfully and rigidly adhered to. Music and liturgical complexity are indeed wonderful, but alone they do not constitute a good service. A good service is one in which all the people prayed fervently and lifted up their hearts to heaven with penitence and love—regardless of the music or the rubrics. To omit this crucial element in our definition of what constitutes a good service is externalism.

Thirdly, one who is truly Pentecostal and Orthodox will come to the Liturgy to receive the Lord. The Eucharist is offered not simply so that the clergy can receive the Body and Blood of Christ, but so that all the baptized faithful can receive. Once again, the text of the Liturgy itself reveals this: the deacon invites everyone present to come forward and receive the Eucharist (the non-communing catechumens having been already dismissed). He does not say, “Those who are worthy come forward”, but simply “In the fear of God and in faith and love, draw near”. Afterward he assumes that everyone in fact did draw near and receive, and so he concludes by saying in the final litany, “Having partaken of the divine, holy, most pure, immortal, heavenly, life-creating, and awesome Mysteries of Christ, let us worthily give thank to the Lord”. In both invitation and concluding prayers, it is assumed liturgically that everyone present at the Liturgy has received Holy Communion. That is the norm; non-communicating attendance was inconceivable in the early church. The faithful did not come to Liturgy to listen to music and watch the clergy receive Holy Communion, but rather to pray and commune along with them. Of course this practice of weekly reception of Holy Communion presupposes daily prayer, Scripture reading, regular confession, and striving to keep the fasts of the Church. Spiritual laxity and weekly Communion can make a deadly combination. A Eucharistic lifestyle also involves a life of discipline and dedication.

Fourthly, a Pentecostal and true Orthodox will expect miracles to occur in the Church. When one is anointed in the sacramental Mystery of Holy Unction, one should expect a measure of healing. When visiting the shrines of the saints, or venerating their relics, one should expect blessing and miracle. Miracles happen because Christ is the miracle-worker, and Christ is in our midst. His most-pure Mother and His friends the saints share in this miraculous power. It is true that miracles of healing happen according to the will of God and cannot be presumed upon. It is also true that the age of miracles is still with us so that we should approach God with an attitude of faithful expectation.

Finally, a Pentecostal and true Orthodox will come to Church as a Spirit-filled member of the royal priesthood, the Body of Christ. In baptism and chrismation each one of us was given the gift of the Holy Spirit, and along with it, spiritual gifts. Those gifts might be as spectacular as a gift of healing the sick, or as unspectacular as a gift for counseling the grief-stricken. We do not get to choose our spiritual gift like an item in a menu. God gives His gifts as He wills. But each one of us has been given the Holy Spirit and a call to serve the Church in some way. Equating ministry and service with clerical rank is simply wrong. All are given the Holy Spirit and a ministry of some kind, not just the clergy. Confining ministry and Spirit-filled service to the clergy produces over-burdened priests and a spiritually sterile laity.

The greatest need in the Orthodox Church is for the laity to know who they are—not the uninitiated (those are the catechumens), but the initiated, not the great unwashed, but the baptismally washed, not mediocre nobodies, but saints. That is why when the deacon invites them to the Chalice every Sunday, he calls them holy: “the holy things for the holy!”—the sanctified gifts of Christ’s Body and Blood for His saints. Sanctity is required of everyone, even if the likelihood of ever being canonized and ending up on an icon is very slim.

At the first Pentecost, the Holy Spirit came down from heaven to make the fishermen most wise, transforming humble workers into theologians and miracle-workers. This transformation is what Orthodoxy is all about. Through His Pentecostal Spirit, Christ can transform us as well. Orthodoxy is Pentecostal by its very nature. All devout Orthodox who live in fervency and faith are Pentecostal by definition. One Doesn’t Forge Iron Carelessly
The teachings of St. Anthony the Great. Part 1
Archimandrite Andreas (Konanos)
St. Anthony was one of the first ascetics to have settled in the desert. Once, having doubts about how he should live in order to be saved, he asked God in prayer: “Lord, what am I to do? How am I to spend my days; how should I live?” On Christian Faith and Life According to the Gospel
Archimandrite Kirill (Pavlov)
Have you picked up the Holy Gospel with the goal of testing whether you are walking the path that is shown to us by our Lord Jesus Christ? If you do not do this, then you are making a fatal mistake that is perilous for you. The heart that is filled with anger cannot receive the Holy Spirit!
Spiritual Wisdom from Elder Proclu
Monk Proclu (Nicău)
The Holy Spirit helps when we bear no evil against anyone.
Comments

Rdr Andreas Moran4/19/2019 12:29 pm
Regarding the second ingredient, this is something the laity need to heed, and be told about if they do not know or understand their part in the services. People may say they did not feel grace in a service. Why? The priest must, of course, prepare himself fully, but grace will only be felt if the people also prepare themselves. It takes both: the people cannot leave it to the priest alone. This is especially true for the Divine Liturgy.

Anthony4/19/2019 9:58 am
''It is too easy to let the clergy and the choir do all the praying while simply standing in pious silence and letting the mind wander.'' Hi komrades! I have a quick quezzie I was hoping you could pass on to our beloved Fr LF. What happens if you attend a parish where you don't speak the local lingo? Par example, I attended the Russian Orthodox Church at one stage, but could never speak a word of the lingo. How should I pray, my voice thundering alongside all those Russkies? Should I pray loudly in Greek using texts that equate to the prayers in Russian? Does Fr LF have some specific advice he can impart on this important issue? I do hope he can clarify and I hope you have a wonderful day!!!
×