Traditions of Celebrating Pascha in Georgia 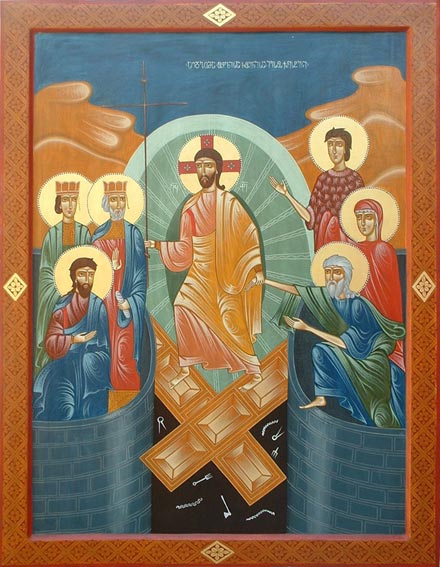 Holy Pascha has always been celebrated in Georgia with special solemnity and grandeur. Like everywhere else, preparation for Pascha begins after the feast of the Entry of the Lord into Jerusalem there. Georgian Christians spend Holy Week in prayer and fasting and attend all services (prescribed by the Church Rules) with their families. Some regions of Georgia still observe the tradition of “purification by fire”. In the evening of Holy and Great Wednesday they make bonfires and jump over them as a sign of spiritual purification. On this day all people try to confess their sins so that they can take Communion on Holy and Great Thursday. Holy Thursday is specially honored by Georgian people as the day of the institution of Holy Eucharist. 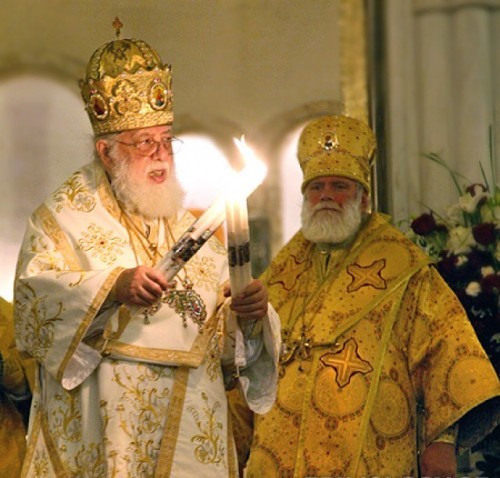 Georgian Orthodox observe Holy and Great Friday as the most momentous day of the year and feel a general air of sadness very keenly. On this day they neither eat nor work, instead spending all day in church. After the Burial Service of the Holy Shroud in the evening they get home and begin to prepare for the feast. 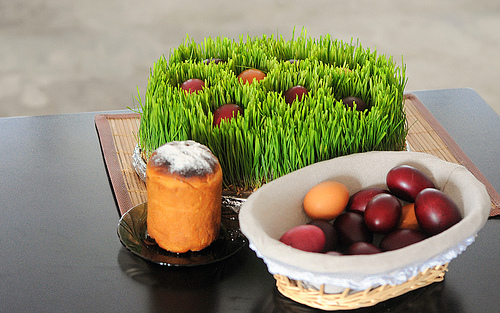 This is how the historian Vakhushti Bagrationi (1695–1758) described the celebration of Pascha in the ancient Kingdom of Georgia. After the Paschal service Georgians would greet one another on the great feast and arrange a short meal with meat and wine. Having fortified themselves, they would go out into the yard and start various games and tournaments, such as archery, ball games, and horse-racing competitions. After these games on the king’s invitation the catholicos-patriarch, bishops, clergy and laity were seated at a sumptuous meal. During the festival a special group of people (ჭონა, pronounced “chona”) would go from house to house singing various joyous songs in praise of the Risen Savior (similarly, the Georgian traditional song Alilo was performed the night before the Nativity of Christ). They were given red eggs, eatables, wine and money in reward for their songs. 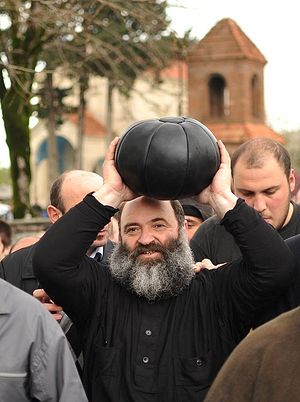 A priest with a ball for the “lelo burti” folk ball game Nowadays traditions of celebrating Pascha in Georgia are combined with folk customs. Few people know the meaning behind these ceremonies, though. Residents of the village of Shukhuti in the Lanchkhuti district still play “lelo burti” [literally meaning, “field ball”.—Trans.] on Paschal Sunday. This custom is 300 years old. This game is very exciting and spectacular; the ball for it (which weighs sixteen kilos) is sewn by the villagers. The ball is kept at church, and on Pascha the priest starts the game by throwing the ball to the contestants. The village is divided into two teams, namely the Upper Shukhuti and the Lower Shukhuti. This game is like rugby: almost no rules are required for you to take possession of the ball. Formerly, ladies were allowed to take part in competitions; alas, today only men can play “lelo burti”. In order to win, a team has to cross the river (which flows in the middle of the village) with the ball and place it on its opposite bank. The winning team exults in its victory, walks around the village, receives congratulations, and then takes the ball to the cemetery and leaves it there as a token of respect to their departed ancestors.

Nearly every village of Georgia’s mountainous regions has its distinctive customs of Paschal celebrations. For instance, in Sno—the native village of Catholicos-Patriarch Ilia II of All Georgia—boys would shoot with a bow and arrows. They were headed by the village’s respected elder. They would go around the village with exclamations: “Christ Is Risen!” After the response: “In Truth He Is Risen!” they were invited to one of the yards and offered a meal. After walking around the village they started their tournament: they would shoot a bow with arrows and use colored eggs as targets. The winner was the first player to hit a target; he would get a special prize.

In mountainous regions the departed were never forgotten; the faithful would gather on their graves and roll Paschal red eggs with the words: “Christ Is Risen!”

In southern Georgia after the midnight Paschal service all parishioners go home, and in the morning women bake Paschal bread in tandyr [a traditional clay dome-shaped oven for baking flat cakes, used in Central Asian and Caucasian republics.—Trans.]; it is one of the main Paschal dishes in the region. Men cook meat, namely ham that they intentionally set aside for Pascha. Of course, traditional wine and cheese are present on their Paschal tables too.

Formerly, residents of Imereti [a historic region in western Georgia.—Trans.] would gather at the Paschal Liturgy before the first cockcrow. This custom is based on the Gospel narrative, when Christ said to Apostle Peter that he would deny Him for three times before a rooster crowed. After the end of the midnight service bells ring all night long, and the faithful dance and sing folk songs in the streets.

At Samegrelo [a coastal region located in western Georgia.—Trans.] the Paschal service begins at midnight. Churches are packed with people, and after the service people chant “Christ Is Risen!” all together. Then Christians go home while singing. The main Paschal dish there is a whole roast suckling pig. Next day numerous relatives and guests continue their Paschal celebrations and sing “Christ Is Risen!” again all together. The most esteemed member of the parish is elected as a toastmaster and given the piglet’s head as a token of everybody’s respect. A “zidashe” earthenware jug of wine

Eastern Georgia has its own Paschal traditions. Residents of the region of Kakheti are not allowed to drink wine on Holy and Great Friday (the only day of the year when it is forbidden) and it is considered a grave sin. After the midnight Paschal service, Kakhetians rest till the morning and then have their Paschal meal. Wine is stored for Pascha in special earthenware jugs called “zedashes” (ზედაშე). On Pascha the jugs are opened: a portion of the wine is donated to church for liturgical use, and the remainder is used to entertain guests at the meal. The tradition with “zedashes” has very ancient roots. There were churches in eastern Georgia where such jugs were kept in the church yard through the year, parishioners gradually filled them during the year, and on the feast they would drink this wine all together. According to custom, Paschal parties in Kakheti last very long; the main Paschal dish there is roast lamb. The priest often acts as a toastmaster, and Paschal hymns and folk songs are performed at the festivities. People go around visiting each other throughout Bright Week.

The grandeur of Holy Pascha is reflected in unique nature of Georgia. On the day of the Resurrection of Christ the weather in Georgia is always sunny, and everything around is in bloom, as if nature sings: “Christ Is Risen!” All these traditions help the whole of the Georgian nation experience the great joy and love that the Risen Savior brought us and share them with each other. For he who doesn’t rejoice in the Resurrection of Christ and doesn’t believe in this doesn’t believe in things above, either. If in this life only we have hope in Christ, we are of all men most miserable. But now is Christ risen from the dead, and become the firstfruits of them that slept. For since by man came death, by man came also the resurrection of the dead (1 Cor. 15:19-21). 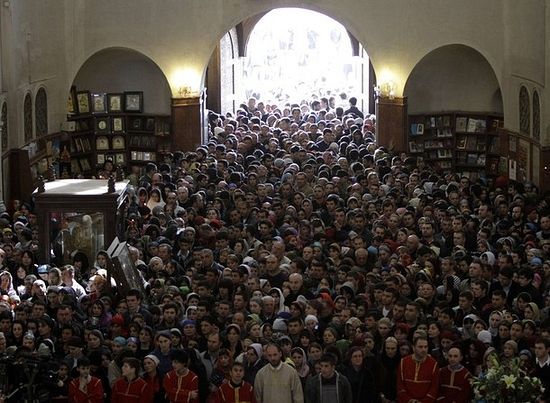 ​The Paschal service in Tbilisi, Georgia

Note: The days from Holy and Great Friday up to Bright Monday inclusively are public holidays in Georgia. Keeping the Joy of Resurrection for the Entire Church Year

Keeping the Joy of Resurrection for the Entire Church Year
Fr. Andrew Lemeshonok
There is only one way for an Orthodox Christian – the way to Christ. All the other ways will bring us to a dead end sooner or later. The dead end where we will find nothing but our own “self”, our personal madness and loneliness.
Comments
×