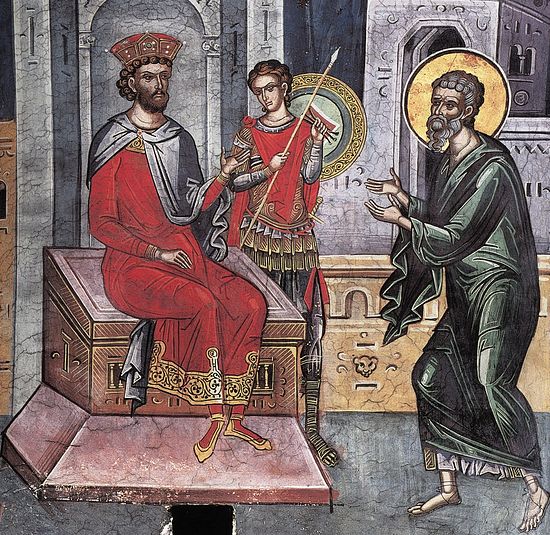 The example of the divine apostles is for everyone an ideal of what all disciples and followers of Christ should be like, how self-denying they should be in serving the Lord. Unfortunately, when we try to put the image of the holy apostles upon ourselves or upon our neighbors, we fall into condemnation. Those whom we condemn especially often are people holding some important position, having authority or power, or simply those who are rich and clever. We say in our own heart, “Why are they not similar to the holy disciples? Why do they fail to confess Christ everywhere, preaching and evangelizing, but continue to call themselves Christians?”

Such condemnation, borne within the Church, inside the Body of Christ, has nothing in common with the divine love and the divine providence that rule our lives.

We can see a wonderful example in the lives of Christ’s secret disciples, whom we commemorate today—Joseph of Arimathea and Nicodemus. We know them by these names, and they went down in history as the secret disciples of Christ. They were wealthy people, Pharisees, lawyers, members of the Sanhedrin—the Jews’ supreme court; they possessed knowledge, respect and authority. Unlike the disciples, they did not confess their faith openly; they never worked any miracles and did not follow Christ everywhere. Christ did not send them to preach. But they show to us through their lives that people who follow the Lord unnoticeably are often ahead of those who tend to boast that they are close to Him.

A majority of the closest disciples abandoned Him for fear, when the Divine Teacher was disgraced and shamed. After He was crucified they scattered and returned to their past life. Beside Him were these secret disciples, for whom the hazard before the Jewish community might have been even more serious than for the apostles, who were not of noble descent. When Christ was crucified, called a robber and a criminal, they were brave enough to be with Him together with the Myrrhbearers.

Nicodemus, who was vouchsafed to talk to the Lord about spiritual birth (John 3:1-10), even defended Christ in the Sanhedrin, argued with the Pharisees, saw the pervasive unfairness and tried to appeal to their conscience as much as that was possible.

To say more, Joseph of Arimathea dared to come up to Pilate, the representative of the secular authority and a savage ruler, who never handled the Jews with especial kindness. Joseph dared to beseech the body of Christ (John 19:38). Taking his social position into account, this was absolutely irrational. He could lose everything, his respect and honor among the Jews and the trust the Romans had for him, but these were of little importance to him. He took away the body of Christ and laid it into the sepulcher that he had prepared for himself. Even today a lot of well-to-do people tend to buy a piece of land for their burial, and they think about it and make careful preparations. Joseph does not wish to find another sepulcher. Together with Nicodemus, he lays the crucified Christ there.

This is an example of how people who, as we believe, deserve condemnation for their hypocrisy or cowardice turn out to be even more self-denying and courageous disciples of Christ.

Every Christian should confess Christ in his own place through love for neighbor, erudition, and everything the Lord has bestowed upon his in this life. Everyone is called to serve Christ in his own place with both wealth and property, as Joseph and Nicodemus did, and as all of Christ’s known and unknown disciples did and still do. The Stone Rolled Away. Exegesis on John 20:2
St. John Chrysostom

The Stone Rolled Away. Exegesis on John 20:2
St. John Chrysostom
The first day of the week (that is, the Lords day) comes Mary Magdalene, very early in the morning, and sees the stone taken away from the sepulcher. Fruits of the Resurrection of Christ
Leave-taking of Pascha
Bishop Alexander (Mileant)
As all die in Adam, so in Christ shall all revive (1 Cor. 15:22). These Apostolic words expound upon not only the physical resurrection of people, but, in the first place, upon spiritual rebirth.
Comments
×