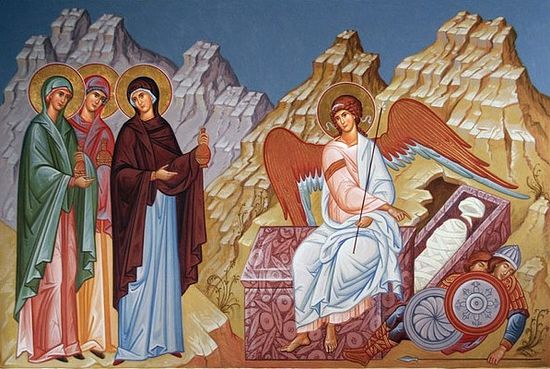 Joseph of Arimathea, a prominent council member, who was himself waiting for the kingdom of God, coming and taking courage, went in to Pilate and asked for the body of Jesus. Pilate marveled that He was already dead; and summoning the centurion, he asked him if He had been dead for some time. So when he found out from the centurion, he granted the body to Joseph. Then he bought fine linen, took Him down, and wrapped Him in the linen. And he laid Him in a tomb which had been hewn out of the rock, and rolled a stone against the door of the tomb. And Mary Magdalene and Mary the mother of Joses observed where He was laid.

Now when the Sabbath was past, Mary Magdalene, Mary the mother of James, and Salome bought spices, that they might come and anoint Him. Very early in the morning, on the first day of the week, they came to the tomb when the sun had risen. And they said among themselves, “Who will roll away the stone from the door of the tomb for us?” But when they looked up, they saw that the stone had been rolled away – for it was very large. And entering the tomb, they saw a young man clothed in a long white robe sitting on the right side; and they were alarmed. But he said to them, “Do not be alarmed. You seek Jesus of Nazareth, who was crucified. He is risen! He is not here. See the place where they laid Him. But go, tell His disciples – and Peter – that He is going before you into Galilee; there you will see Him, as He said to you.” So they went out quickly and fled from the tomb, for they trembled and were amazed. And they said nothing to anyone, for they were afraid.

Today in our Church we honor the Myrrhbearing Women who bravely went to the tomb of Christ to anoint His corpse.  Mark in his Gospel even gives us their names: Mary Magdalene, Mary the mother of James, and Salome, so we aren’t honoring “anonymous”, nameless women, but people well known to the Apostles, and who are all glorified as saints in our church. They are named as the Women Disciples of the Lord.

Additionally today, we have in America, Mother’s Day, and we are honoring our mothers, who gave birth to us and nurtured us in life. One of the three Myrrhbearing Women Disciples of the Lord is also listed as Mother – her name happens also to be Mary. We give thanks to you our mothers for all the beautiful things you have done for us, including giving us life. Our mothers share in one of God’s own characteristics – being life-giving – in a way that we males cannot, so it is appropriate for us to recognize the godliness of women and to honor our mothers.

There is another woman disciple of the Lord that we know and she too happens to be named Mary, it is Mary of Bethany, the sister of Lazarus and Martha – she too is counted as one of the myrrhbearing women of the Gospels. In John’s Gospel (11:1-2) we learn about this family:

Now a certain man was ill, Lazarus of Bethany, the village of Mary and her sister Martha. It was Mary who anointed the Lord with ointment and wiped his feet with her hair, whose brother Lazarus was ill.

And while he was at Bethany in the house of Simon the leper, as he sat at table, a woman came with an alabaster flask of ointment of pure nard, very costly, and she broke the flask and poured it over his head. But there were some who said to themselves indignantly, “Why was the ointment thus wasted? For this ointment might have been sold for more than three hundred denarii, and given to the poor.” And they reproached her.

But Jesus said, “Let her alone; why do you trouble her? She has done a beautiful thing to me. For you always have the poor with you, and whenever you will, you can do good to them; but you will not always have me. She has done what she could; she has anointed my body beforehand for burying. And truly, I say to you, wherever the gospel is preached in the whole world, what she has done will be told in memory of her.” Then Judas Iscariot, who was one of the twelve, went to the chief priests in order to betray him to them.

Jesus considered what Mary did for Him – anointing His body in preparation for His burial – to be a beautiful thing. I’m sure Jesus would also have seen the Myrrhbearing Women coming to the tomb to anoint His corpse as a beautiful thing. Especially considering that His male disciples were cowering behind locked doors afraid that they might be identified as His disciples if they showed their faces in public.

When we look into the Scriptures we will see that the concept of “beauty” is related to many other ideas including that which is lovely, fair, desirable to the eyes, comely, befitting, pleasant, graceful, true, delightful, handsome, and godly. Beauty is also connected to glory, splendor, being faithful, and loving. That list in itself is joyous to think about.

In Scripture beauty comes from God, and beauty reveals God to us. Beauty is joyful, wonderful, startling and glorious. Beauty is something to be valued for its own sake. We don’t value beauty because it makes us rich, rather it is prized simply because it is beautiful even when it gives profit to no one. Beauty is noble, eternal and godly.

The Myrrhbearing Women as they went to the tomb to do this beautiful act, knew nothing about the resurrection. They only knew their Lord had been killed and that the authorities were threatening to harm anyone who followed Jesus. So they represent to us courage, nobility, faith, hope and love even in the face of the threat of death.

We honor them for these virtues. We all should be so virtuous and noble and courageous as these Women Disciples of the Lord. In the face of death they don’t seek revenge or bring retaliation, they seek only that which is beautiful.

And we should consider whether we value such beauty in our lives. Do we strive for this beauty that is related to courage, truth, love, nobility and virtue?

We might ask ourselves who are we more like from the Gospel lesson of the anointing of Jesus at Bethany. Judas who was most concerned about money? or Mary who is concerned about beauty, purity of heart and virtue? Which are we striving for in our lives? What do we really seek with our mind and strength?

Do we even bother to seek out this godly beauty in our lives, and do those beautiful things which benefit others but bring no benefit to ourselves? or are we always thinking about what benefits me? Do we teach our children the value of godly beauty or is our only concern that they grow up and be prosperous, powerful and successful?

If we are to be disciples of Christ like these Women disciples who we honor as saints, then we need to have serious discussions within our families and with each other about virtue, beauty, truth, purity and all of these characteristics of God.

Too often instead we place power, wealth, success, pride, and fame as our highest ideals. We crave being praised. Too often in the modern world we want to debate the roles of power and authority in the life of the church. But Christ taught us that such arguments belong to the non-believers (Luke 22:25-26). For us the discussion is not who is the greatest, but how can we serve one another and serve the Lord?

Jesus taught us to wash one another’s feet, and these Women Disciples of the Lord are going to the tomb to wash the body of Jesus. The men disciples who debated as to which of them was the greatest are all cowardly hiding at this moment. So which of these people – the women or the men – show themselves to be true disciples of Christ?

The Myrrhbearng Women reveal to us the more perfect, healthy, spiritual and beautiful way. God created beauty and set eternity in our hearts.   As the Psalmist sings:

One thing have I asked of the LORD, that will I seek after; that I may dwell in the house of the LORD all the days of my life, to behold the beauty of the LORD…   (Psalms 27:4)

Those Women Disciples of the Lord remind me about a hospital for children which I once read about. The hospital didn’t see the children just as patients but also as healers of themselves and others. The children were not viewed as victims needing professional help, but as people capable of healing others. The hospital’s motto: “If you can help somebody else, you are not disabled.”

In the Church we are not merely the walking wounded or the spiritually sick, we are able to show concern and care for others – we are not disabled. We are here to serve, no matter what our condition or what we feel about ourselves or of how much we need to repent. You are not disabled because you are able to help somebody else. We are here to be as courageous as the women disciples of the Lord and serve those who are in need.

Which brings me back to the fact that while all of us are called to serve one another , diakonia – to be deacons, we are especially remembering today our mothers who often are a great example of self-sacrificing service to others. Mothers not only sacrifice their lives and time for their children and husbands, but they also have special opportunity for being evangelists in their families. In that way they are certainly Women Disciples of the Lord. For it is the Myrrhbearing Women who tell the Disciples about the resurrection. And often it is our mothers who who pray for us their children. There is a saying in the Church that the prayers of mothers is the foundation of households. May God bless all of your our mothers with courage, faith, hope and love. May we all follow the example of the Women Disciples of the Lord. Our Grandmothers, Mothers, Wives, Sisters, and Daughters
On the high calling of women
Priest Dimitry Shishkin
Although the author of this article lives in a country that celebrates “International Women’s Day” in March, it is also apropos to the American tradition of Mother’s Day, celebrated in May. This year the Sunday of the Myrrbearers coincides with Mother’s Day, and we wish our readers who are mothers a happy one. The Bravery and Courage of the Myrrhbearing Women
Archimandrite Cleopa (Ilie)
Their great zeal, sacred reverence, and courage of soul passed over all the Jews’ obstacles, and all the guards at the Tomb did not shake their resolve. But one thought, but one desire led their minds and hearts— to serve the funeral of their dear Savior with fullness of faith and with reverence.
Comments
×