A Theologian Among the Evangelists 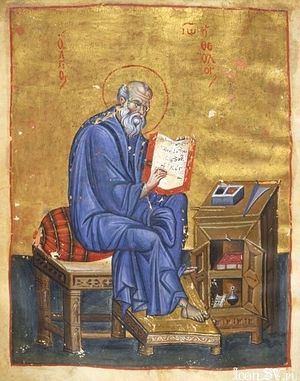 Source: http://www.pravoslavie.ru/put/64758.htm © Pravoslavie.ru Theology appeared in the Church almost immediately after its foundation. It could not have been otherwise. Standing beside Christ, His disciples would ask each other: “Who is He?” And it was theology that answered their question. The disciples saw a Man, a great Teacher who instructed them in the spiritual life. They saw that He was the long-awaited Messiah. And even more than that. The genuine, unexpected, and awe-inspiring Theophany was revealed to them.

The apostles admitted that Christ was True Man and True God. There was the paradoxical co-presence of the divine and the human in Him. That is why the idea that Christ is the God-man is clearly expressed in the writings of the apostles and all the evangelists. This idea highlights the very essence of Christian theology.

All the evangelists proclaim the “theological” good tidings of Christ. But the Gospel of John stands out remarkably even in the very distinct theological background of the New Testament. It is so remarkable that its author is honored with the title “Theologian” by the Church. There were a host of outstanding thinkers among the Orthodox saints who formulated the Church teaching brilliantly. Yet over its entire history only three saints are listed as “Theologians”. The first and most important of them is St. John the Evangelisas early as the first century A.D. He set the tone for the whole theology of the Church.

Apostle John took the contemplation of eternity as the basis of his Gospel: In the beginning was the Word, and the Word was with God, and the Word was God (Jn. 1:1). In Russian this sounds rather abstract because “slovo” (the Russian for “word”) is neuter gender. And “λόγος”, logos” (the Greek for “word”) is masculine gender. So the original is not abstract at all. St. John the Evangelist’s verses on God the Logos sound quite “personal”.

The prologue to the Gospel of John should be understood “personally”. There is only one God, God is one and there is no other God like Him. The numerous pagan deities do not exist. And there is some mysterious distinction within the One God. In which sense? In the “personal” sense: Three Persons can be distinguished in the One God.

Let us repeat the prologue to the Gospel of John: the Logos was God, the Logos was with God (though it can also be translated as “the Logos was to God”—“ ὁ λόγος ἦν πρὸς τὸν θεόν”). According to the Gospel, in some sense the Divine Logos is ever directed towards God and exists “face-to-face” with God. The Logos and God co-exist in perfect unity of love.

Through the little prologue to the Gospel of John the powerful “shoots” of Trinitarian theology begin to “take shape”. That is, the “shoots” of the teaching of the All-Holy Trinity: the Father, the Son, and the Holy Spirit. St. John the Evangelist calls the Father “God” (the eternal source, or the origin of the Godhead), and calls the Son “the Logos”1. As for the Holy Spirit, he will write about Him later in his Gospel (cf. Jn. 14:16-17)… Thus, as we read the Gospel of John the doctrine of the Divine Trinity is revealed to us.

Why is God the Son called the Logos? Apostle John was preaching to the people of the Hellenic civilization, so he calls Christ the Logos. What knowledge could representatives of that culture gain from his Gospel? “Logos” is a multiple-meaning word, which could refer to “reason”, “word”, “financial account”2, and so on.

The Hellenic world, which was developing its philosophy, understood the term “logos” as the law of the universe. But John the Evangelist speaks about something more important: the Logos that was with God is the Creator of the universe and not just the highest law of nature. All things were made by Him; and without Him was not any thing made that was made (Jn. 1:3). The rational order of the universe originates from God the Logos. He is the Creator and Organizer of the entire world. It is not a mere intrinsic law of all things; rather, it is the living Person of God Who is above and before all things. The Son of the Most High came to earth, became a human being, and revealed Himself to people: And the Word was made flesh, and dwelt among us, and we beheld His glory (Jn. 1:14).

What did He come for? The Logos was God from the beginning; then the Logos became incarnate and assumed the human nature, while remaining fully God. He became what we are so that we could become what He is.

The Lord wants to adopt us into His family as His sons and daughters. It is not a mystery invented by someone—it is the breath of the direct revelation of God and mysterious theology. This revelation works with a special power and becomes manifest to the apostles in the final days before Golgotha. St. John the Theologian writes at length about this. Virtually half of his Gospel is dedicated to this (from chapter 12 onward). Look at the way he recounts the Last Supper. Only a bosom friend of Christ—that is, His closest, most attentive and beloved, “best” disciple could do it.

Christ was preparing His disciples for the fact that He should go to Jerusalem to suffer, to be unjustly tried and crucified. One day He took His closest disciples high into a mountain and was transfigured there in front of John, Peter, and James. And all three of them beheld Him in His full glory, surrounded by the uncreated light. When the Lord was transfigured, the apostles recognized Him, though His appearance was remarkably changed. But when shortly after the Transfiguration the Risen Christ appeared to the disciples again at the Sea of Galilee, they did not recognize Him!

The appearance of the Risen Teacher was be totally different. It was not the appearance that had been familiar to all the apostles in every detail before the Resurrection. No one recognized Christ except John who said to Peter in the boat softly, It is the Lord (Jn. 21:7). Peter was so shocked by the revelation that he instantly jumped into the water and swam ashore. Peter (who had denied Christ three times) approached his Teacher with awe, was forgiven and restored by Him as an apostle and spiritual pastor. Truly the Risen Teacher was waiting for His disciples on the shore. St. John was right. Thus the divine reality, which is invisible to many people, again manifested itself to John on the Sea of Galilee. It was allowed to Apostle John to see the things which were invisible to others…

1 In our prayers we still address Christ by the name that was first used by John the Divine. Let us recall Prayer of St. Antiochus (from the evening prayers): “O Almighty, Lord of the Father, Jesus Christ Who art Thyself perfect, for Thy great mercy’s sake never depart from me, Thy servant…”

2 See the parable of the unjust steward: *give an account of thy stewardship* (ᾀπόδος τὸν λόγον τῆς οἰκονομίας σου) (Lk. 16:2). The Holy Apostle and Evangelist John the Theologian
September 26 / October 9
Truth is reflected in his mind and in his words, for he feels it and comprehends it in his heart. He contemplates eternal Truth, and as he sees it, passes it on to his beloved children.