The Geometry of Temptation 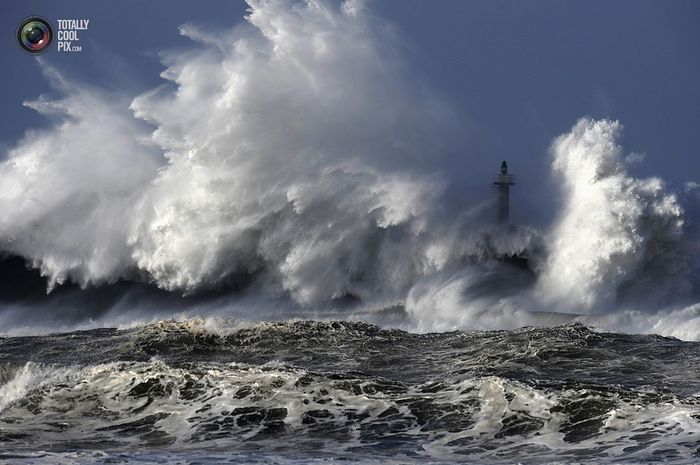 Probably everyone has in their lifetime heard someone admit roughly the following: “I’m unlucky; all my life I’ve been surrounded by scoundrels.” Others say the exact opposite: “I’m lucky. All my life I’ve had such wonderful people with me, kind and upright.” Moreover the first group usually complains that their lives are just a chain of undeserved troubles and misfortunes, while the second are amazed at the multitude of pleasant events and circumstances their fates have held. Most paradoxical is the fact that both groups might live in one and the same hamlet, sometimes even on the same street, at times even in the same house or even in the same family.

What is the reason for such contradictory opinions?

“What the eye means for the body, so does the mind for the soul,” as St. John Chrysostom explains this passage. The impure, depraved mind is not capable of making a trustworthy appraisal of the events around him. “Therefore, as regards the body we care more to have good vision, so with regard to the soul we should most of all take care for the health of the mind... If you block the spring you will dry out the river; likewise whoever darkens the mind will make a mess of all his actions in this life.”1

That is, our sick mind distorted by the passions shows us a picture of the world around us as if in a crooked mirror, which is the main source of our conviction that we are surrounded by nothing but bad people.

On the other hand, we know that the saints, who could see the first-created, divine image in every person, viewed everyone around them as better than themselves. For them it is ordinary to perceive the world as St. Moses of Optina expressed it: “I myself am worse than all others; others perhaps only think that they are worse than everyone, but I have in fact realized that I am worse than everyone.”2

But there is something else that explains this phenomenon. The fact of the matter is that troubles, temptations, and sorrows are the indispensible components of our salvation. The apostles Paul and Barnabas confirmed their disciples in the faith, exhorting that we must through much tribulation enter into the kingdom of God (Acts 14:22). The necessity of sorrows and temptations for our salvation is such that, according to St. Anthony the Great, “No one can enter the Kingdom of Heaven without temptations, for no one will be saved who has not been tempted.”3

Nevertheless, knowing about this law of spiritual life does not always prevent us from being displeased and even murmuring when we are met with sorrows, sicknesses, or serious troubles. The usual reaction in such cases is, “What did I do to deserve this?” or, “Why did this happen to me?”

We can find the answer to this question from the apostle James: Let no man say when he is tempted, I am tempted of God: for God cannot be tempted with evil, neither tempteth he any man: But every man is tempted, when he is drawn away of his own lust, and enticed. Then when lust hath conceived, it bringeth forth sin: and sin, when it is finished, bringeth forth death (Js. 1:13–15).

That is, life situations around us come together for no other reason than, firstly, that we accept them in accordance with our inner state, and secondly, accordingly to the law of “like attracts like”. For example, Blessed Theophylact of Bulgaria says, “lack of faith4 attracts danger.” For this reason, when the Lord calmed the storm at the apostles’ cries, he first “calmed their emotional disturbance, and then the sea.”5

Therefore a Christian accepts the circumstances of his life as given to him by God for his correction and perfection. The Lord so wisely formed His creation that all external and internal circumstances come together for each person in such a way to make it easier for him to correct himself.

In this sense, very telling is the example cited by Abba Dorotheos: “It also happens that someone thinks he is abiding in peace and silence; but when his brother says an insulting word to him he gets upset and considers that he has the right to be grieved against him, saying, ‘If he had not come and upset me with his words, I would not have sinned.’ What ridiculous thinking! What diabolical deception! Did the one who said the word to him place the passion in him? He merely showed him what was already inside of him so that if he wants, he might repent of it. Such a man is like spoiled bread, which looks outwardly good but is moldy inside, and when someone breaks it the rot is exposed. It is the same for that man: He was abiding, or so he thought, in peace, but the passion was within him and he didn’t know about it. The brother said one word to him and exposed the rottenness hidden within him. Thus, if he wants to receive mercy then let him repent, be cleansed, and progress; and let him see that he should even thank his brother for bringing him such benefit.”6

It remains within our power to accept and survive the difficulties and sorrows that come to us, or to not accept them and succumb to the feeling of indignation (quite fairly, in our opinion) and murmuring. In the first case we receive benefit and spiritual correction, and in the second case, we only increase our illness.

On the spiritual benefit we receive from worthily enduring temptation the apostle Paul says, No chastening for the present seemeth to be joyous, but grievous: nevertheless afterward it yieldeth the peaceable fruit of righteousness unto them which are exercised thereby (Heb. 12:11).

If you don’t endure temptations, then according to the holy fathers, you thereby refuse divine aid, deprive yourself of the hope of correction, and practically renounce Christ. “If you affront him [your offender], then you say strongly to Christ: ‘I do not want to accept Your healing, I want to rot in my wounds’.”7

Spiritual life cannot abide in a congealed state. It is impossible to attain any spiritual perfection and “rest on your laurels”. In the latter case we’ve described how our soul is doomed to degradation and further sinks into the passions.

If we were to try to graphically depict this spiritual law, then the human soul could be shown in the form of a circle, and the passions as sicknesses of the soul, in the form of defects of various shapes. 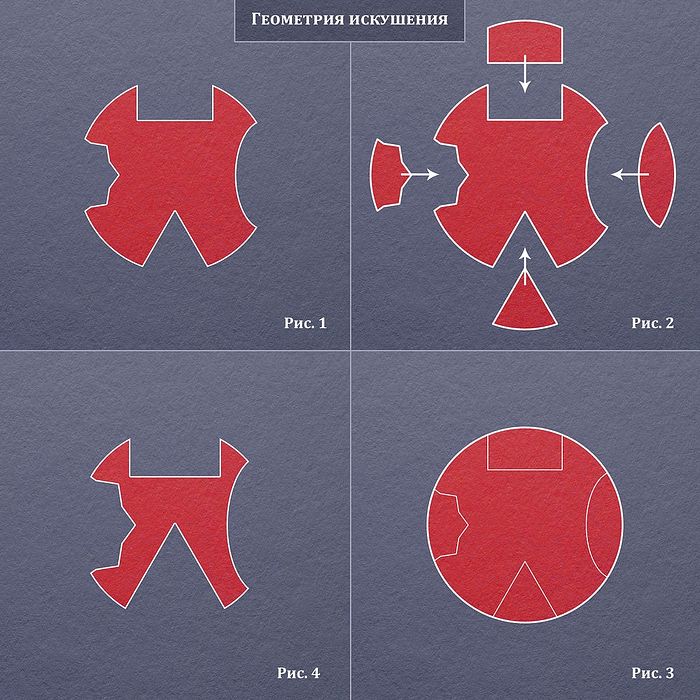 The geometry of temptation.

The form in the upper left corner (1): Temptation in this case, in accordance with passion, repeats the form of the defects.

The form to the upper and lower right (2, 3): If we endure temptations, then the defects on the circle are filled, and the soul comes to a peaceful, healthy state.

The form in the lower left corner (4): If we do not take ourselves in hand and our reaction to sorrows becomes a striving to punish our offender, and we give in to anger, resentfulness, in a word—life on the leash of our passions, then the state of the soul deteriorates, which can be shown by the enlargement of the circle’s defects.

In the latter case, we can end up in such a bad state that not only is our soul harmed to an extreme degree, our perceptive abilities reach a state of decline and everything around us turns against us, but we find it impossible to live in the place we’ve always lived: “The elder said, ‘if a person should live in some place and does not bring forth the fruits of that place, then that very place will expel him, for he did not bear the fruits of that place.”8

5 Blessed Theophylact, Archbishop of Bulgaria, Explanation of the Holy Gospel, the Gospel of Matthew (Moscow, 2001), 96 [Russian]. If You Want to Triumph
Monk Proclu Nicău
Whoever is cautious about little sins that you barely account as significant will not end up doing battle with big sins, because God protects him, seeing his struggle and humility.
Comments
×