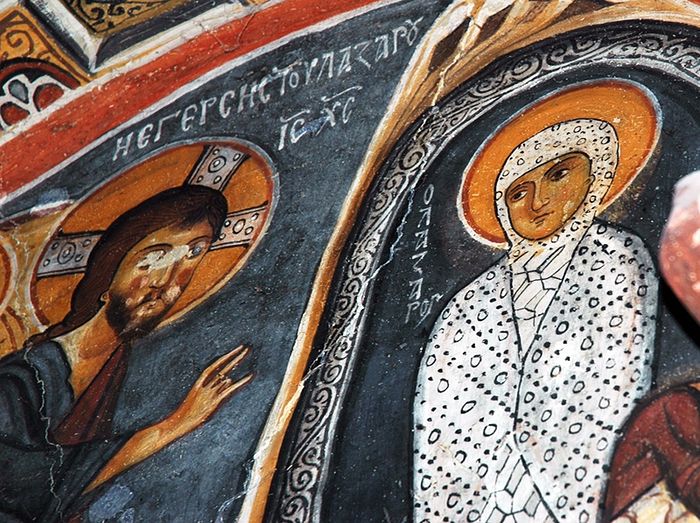 Today we remember the miracle that the Lord Jesus Christ wrought on the way to His suffering. The Lord resurrects Lazarus, a man who was a friend of God and His disciple. He was the natural brother of two of Christ’s nearest—Martha and Maria, who served Him (cf. Jn. 11).

Lazarus got sick and died. As was done in those days, He was laid in a tomb in a cave, which was then sealed shut with a stone. Enough time had passed for his body to decompose. When Christ came to resurrect him, his perplexed sister said, “He already stinks.” In these words was doubt that such a thing could happen. How could a man be resurrected whose body is visibly decomposing? That is, he hadn’t died just yesterday, and now obvious signs of his bodily death could be seen. The Lord raises Lazarus, who then serves His name for many years, and rules the Church on the island of Cyprus, where he is remembered and honored to this day.

This is the story also of each one of us. In general, all the Gospel events here are with us at all times and penetrate all our lives. All the gospel events have a direct relationship to our personal lives, and most importantly to the salvation of our souls. Every person who has received Holy Baptism and even every person who has at least once in his life made a step toward the knowledge of the true God is already a friend of God, as was Lazarus.

But our sins, our neglectful lives, often bring us to the point where death comes to everything good, beautiful and divine in our souls. Our sins decay our lives, murder it, and we don’t even notice it and continue to stink.

There are such sins, passionate habits, or sicknesses that really do generate an unpleasant smell. People next to such people find it unpleasant. This is the obvious manifestation of the consequences of sin. It can even be difficult to be in the same room as a sinner. Many know this from their own experience—that a certain heavy air is present. The same heavy air is present around a decaying corpse. A living person cannot endure this smell; he can be poisoned by it.

Such people, already stinking with their sins, already perished and dead, the Lord resurrects, cleanses, brings closer to Himself, and joins them to Himself in the eternal resurrection and in eternal life. The story of Lazarus is the story of every one of us. 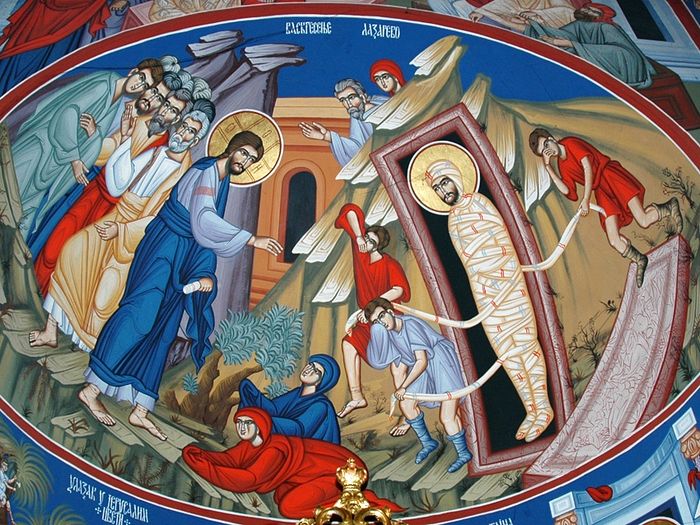 This story also speaks to us about how attentive we should be and with what love we should treat our stinking neighbor, the Christian. As his sisters asked Christ, wept, and told Christ about the death of their brothers, so should we also call out to the Lord about the death and decay of our neighbor, pray to Him, and boundlessly believe that He is the Son of God, and that He can raise the sinner.

Great Lent passes by and many of us realize with horror that this time went by in vain, that we are the same walking corpses, decaying from our own sins. But before Passion Week, the Lord gives us the joy of the Resurrection, reminds us that He resurrects us and is powerful to deliver us from all sin, decay, death, and corruption.

Each one of us wears the sign of victory—the cross of Christ. And we as the children of God, as witnesses to the resurrection of Lazarus the Four Days Dead, now that the Lord is entering upon His sufferings of the Cross, wear this cross of Christ as those “bearing tokens of victory” and cry aloud: “Hosanna! Blessed is He that cometh in the name of the Lord!