Reflections on Holy and Great Monday 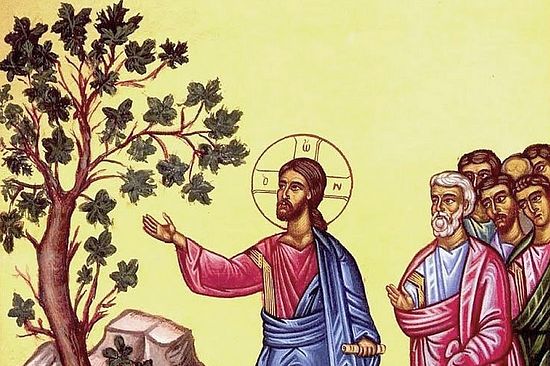 ​The cursing of the fig tree

“Once I remember walking with a prosperous publisher, who made a remark which I had often heard before; it is, indeed, almost a motto of the modern world… The publisher said of somebody, ‘That man will get on; he believes in himself.’… I said to him, ‘Shall I tell you where the men are who believe most in themselves? For I can tell you. I know of men who believe in themselves more colossally than Napoleon or Caesar… The men who really believe in themselves are all in lunatic asylums.’ He said mildly that there were a good many men after all who believed in themselves and who were not in lunatic asylums. ‘Yes, there are,’ I retorted, ‘and you of all men ought to know them. That drunken poet from whom you would not take a dreary tragedy, he believed in himself. That elderly minister with an epic from whom you were hiding in a back room, he believed in himself. If you consulted your business experience instead of your ugly individualistic philosophy, you would know that believing in himself is one of the commonest signs of a rotter. Actors who can’t act believe in themselves; and debtors who won't pay. It would be much truer to say that a man will certainly fail, because he believes in himself. Complete self-confidence is not merely a sin; complete self-confidence is a weakness. Believing utterly in one's self is a hysterical and superstitious belief…’1”

The idea unlying these two stories is very much the same. It is very important to find support in life, an idea that will allow someone to keep his head above water even in the most tragic periods. It is important not to lose faith in the fact that your life is not meaningless, that its circumstances are not random, and there is something inimitable and unique in the path you walk.

For secular people (for them the Church is no more than a “good idea”) it is the wealth of a person’s inner world. They often say of someone who is talented, lively and often has sparks of inspiration, “How rich his inner world is!” For such people any thought of destruction, the reappraisal of inner aspirations, personal views and desires is associated with the tragedy of disappointment and the hopelessness of despair. Falls are very painful, and failures can be irreversible.

The hopelessness and apathy we often see in the eyes of people who were once very successful but are now in difficult life straights indicate the vulnerability of the wealth of their inner world. In the long run it doesn’t save them, and each recollection of their former prosperous state oppresses them even more, adding new notes of tragedy to the situation…

But there is another path. It was Christ Who first followed it about 2,000 years ago. It began precisely with the ruination of the wealth of the human inner world, experience and self-confident theological intuition. Yes, the way of Jesus Christ to the Cross began exactly with this ruination. It was then, on Holy and Great Monday, that the Lord cursed the barren fig tree (cf. Mk. 11:12--14). The move was symbolic in the highest degree. For the Jews the fig tree was considered a symbol of wisdom. Special importance is attached to it even in Buddhism. In Buddhism it (“the Bodhi Tree”) is a symbol of enlightenment and insight into the truth because it was under that tree that in 528 B.C. Prince Siddartha Gautama (the Buddha) came to the deepest understanding of the essence of life, which according to Buddhism consists in achieving release from suffering on earth. It is sacred for Muslims too. And the fig was generally considered a sacred symbol of abundance throughout the ancient East.

So much more remarkable that at the very beginning of His way of the Cross, Christ curses the barren fig tree! That is, with the coming of the Savior to this world, all hope humanity had in its knowledge, experience and talents, or any self-confidence become not only fruitless but also signs of opposition against God and, are cursed!

No idea is repeated by the Savior in the Gospel as often as the idea of the need for self-denial and not relying on your strength. The ladder of the New Testament virtues in the Sermon on the Mount begins precisely with this: Blessed are the poor in spirit, for theirs is the Kingdom of Heaven (Mt. 5:3). The Lord warns all who want to become His disciples about this: Whosoever shall seek to save his life shall lose it; and whosoever shall lose his life shall preserve it (Lk. 17:33). The Savior exhorts all who believe in Him: If any man will come after Me, let him deny himself, and take up his cross, and follow Me (Mt. 16:24).

There is no burdensome command from a faraway God in these words Christ spoke. It’s the truth of the human inner world, where there is no place for two Gods! And if the idol of someone’s ego is erected in the holy place, there will be no place for the Savior and His Gospel in such a soul. So every path towards God is the path of the Cross. It is not necessarily connected with external difficulties, poverty and persecution. But there must invariably be an awkward, painful and relentless struggle with yourself. There is no other way to heaven.

And in this sense, the Savior’s way of the Cross forever put an end to the search for the strength to overcome life’s hardships through self-confidence. The Passion of the Son of God, His self-sacrifice on the Cross, are the highest evidence of His faith in man, and sacrificial love for all! We must seek inspiration in the boundless love and mercy of our God in order to overcome the most difficult trials and rise after the greatest falls. Our God is the God of love; He gave Himself up for us, and therefore He can’t wish us ill or put us in circumstances beyond our strength. Therefore, to avoid the tragedy of deceiving ourselves by believing in ourselves, we should come to love Him Who has come to love us!... Great Monday
Archpriest Valentine Amphiteatrov
On the path of our cross, the difficulty is eased by the soul’s yearning for God. Only this way can we tear up the tares from our souls and leave space in them for grace. The Noble Sufferings of the Righteous Joseph
Schema-Archimandrite Zosima (Sokur)

The Noble Sufferings of the Righteous Joseph
A Homily Following Holy Monday Matins
Schema-Archimandrite Zosima (Sokur)
When we see a great man, we have not animal fear, but reverence: What a great, virtuous life! May this majestic fear of God and the fear of sinning in our sinful abomination accompany us in our spiritual life. Let us all reflect on the life of the righteous one. The Pilgrimage of Holy Week
Fr. Stephen Freeman
The apex of the year for Orthodox Christians is easily Holy Week and Pascha. I had the opportunity in 2008 to make a pilgrimage to the Holy Land. To receive communion in the tomb of Christ, or to stand at Golgotha is no little thing. And yet, the services of Holy Week within one’s own parish are a greater thing.
Comments

Dmitry4/15/2020 8:07 pm
Dear Joseph, I am quite sure the author is educated enough and is aware that G K Chesterton was a Roman Catholic. He doesn’t say Chesterton was Orthodox: he just cites a tiny extract from his book, Orthodoxy (in the sense: the true faith), which indeed is a classic of the Christian apologetics. Neither does the author give an intimation that the faith of Christ should be supported by Buddhism, that would be absurd. He just mentions that the fig tree was an important symbol in many cultures, not only among the Hebrews. In my opinion, G K Chesterton and C S Lewis, though they were not Orthodox, are two great apologists of the 20th c. who defended the traditional Christianity and helped many in the West (and even outside) rediscover it. I would say that in Heterodox we can see what makes them different from us Orthodox, non-Orthodox and even anti-Orthodox. But we can also see that some of them have understood parts, sometimes important parts, of the Truth. This helps us appreciate them, that even outside the Church they have understood something, but also helps us understand our own Orthodox faith.

Joseph Bell4/13/2020 5:12 pm
As a bookseller for over 20 years I can tell you, Chesterton was not Orthodox. Having studied the religions of the world for 7 years beginning in the late 1980's, I assure that the true faith does not need the support of Buddhist or Muslim culture. What it needs is the spirit before the letter of the law and the faith of Nathanael as recorded in John 1:48 through 1:51.
×