A Priest’s Encounters with Jehovah’s Witnesses 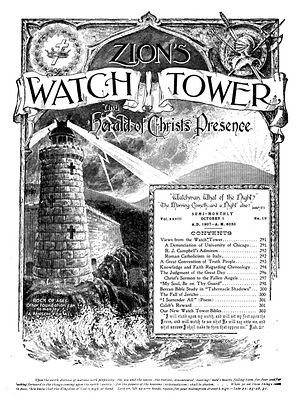 Batiushka was going to church once, when right in front of him a talkative young man was blocking the path to the church for one of his parishioners. He had a magazine in his hand—“The Watchtower”—published by the Jehovah’s Witnesses. This elderly woman tried this way and that to get around him, but he was obstructing her path and speaking quickly about something.

Fr. Boris went up to him and said: “Be a good boy and let this babushka through!”

The young man looked him up and down, looked at his riassa, and boldly blurted out: “And who are you to tell me what to do?!”

Without hesitating, Fr. Boris answered: “Me? I’m a Jehovah’s Witness!”

The young man was taken aback.

“How can you be a Jehovah’s Witness?! What does that make me?!”

“You are a false witness! But I am a true witness of Jehovah!”

Another time, Fr. Boris met another Jehovah’s Witness on his way. He was also talking to a parishioner, waving “The Watchtower” in front of her nose. He was indignant about something. Fr. Boris went closer and listened. The Witness saw him and started expressing his indignation and even louder:

“Why do you Orthodox people wear crosses?! Why do you call God ‘Father?!’”

“What should we call the Lord God if not Father?”

“God can only be called Jehovah!”

Then Fr. Boris asked him: “Why did the Lord give us the prayer ‘Our Father,’ and not ‘Our Jehovah?’”

The young man paused. He stopped waving the magazine. He thought and said: “Well, probably because ‘Our Father’ and ‘Our Jehovah’ are the same thing.”

“So, if they’re the same thing, then why are you bothering our babushkas?!” One day Fr. Boris came home from church, and suddenly there was a knock at the door. Batiushka went to the door as he was, in his cassock. He opened up—and there stood a Jehovah’s Witness. The Witness obviously wasn’t expecting to see an Orthodox priest. He was startled, but asked him his prepared question:

“Do you believe in God?”

Batiushka smiled. He answered: “I think so!”

The Witness perked up with joy: “You think?! Oh, you think! If you really believed in God, you wouldn’t say that!”

Batiushka asked him: “Tell me, in your opinion, did the Apostle Paul have the Holy Spirit?”

This made the Witness angry: “Of course he did. He was an apostle!”

“And he said about himself: ‘I think I have the Spirit.’”

The Jehovah’s Witness turned and walked away from Batiushka. That was their conversation…

The local cable television channel gave twenty minutes a week for Orthodox programming. Fr. Boris started hosting the broadcast and called it “In the Spirit of Truth.”

Everything was fine, but then one day the director of the studio asked Batiushka to come to his office. Fr. Boris went to his office and the director told him: “Some Jehovah’s Witnesses have come. They’re complaining that we give airtime to the Orthodox and not to them. But we can’t spend any more than twenty minutes a week on the show. What should we do, Batiushka?”

Fr. Boris thought and said: “So let them come on the show. We’ll talk!”

The time for the next show came. Fr. Boris arrived at the studio and there were already two Jehovah’s Witnesses sitting there in black suits. They had a severe, belligerent look, ready to denounce the Orthodox priest. As soon as the cameras started rolling, one of them jumped up and started to reprimand Batiushka:

“Why do parishioners kiss your hand when they’re taking your blessing? Where does the Bible say to kiss hands?! If you show me where, I’ll kiss your hand myself!”

Fr. Boris replied: “Alright, I’ll let you kiss my hand if you show me where the Bible says that you should wear pants.”

The Witness fell silent. He sat down. Then the other leapt up:

“We live exclusively by the Bible, but you’re forever talking about Sacred Scripture and Tradition. We don’t believe in these traditions! People pass them on, but people can make mistakes!”

Fr. Boris took out a Bible and answered: “Find me a saying in the Bible that says you can believe only in the Bible. Can you? I can find for your many places in the Bible where it’s commanded to believe the prophets and teachers and what the prophets once spoke.”

The Witnesses looked, and Batiushka had such beautiful bookmarks in his Bible. Then they both got up and silently left the studio. Thus, Fr. Boris didn’t manage to have much of a dialogue with the Jehovah’s Witnesses… “Jehovah’s Witnesses Do Not Need a Search for the Truth”
Interview with Artem Grigoryan, a former long-standing member of Jehovah's Witnesses
Priest George Maximov, Artem Grigoryan
In association with the Russian SPAS (Savior) TV channel, Pravoslavie.Ru has begun publishing a series of remarkable stories about our contemporaries who embraced the true faith after following various false teachings. Jehovah’s Witnesses
Fr. Alexey Young
Anyone who has had more than a passing encounter with Jehovah’s Witnesses would find it hard to disagree. Their arguments appear so tightly constructed as to be virtually unassailable. Even if one is left unconquered, the experience is frustrating. Is this a no-win situation?
Comments

ACatharina5/17/2020 12:15 pm
The cult is a demonic abomination with startling amount of young adherents. It should be banned in all countries.
×