Following the reconversion of the famous Agia Sophia Cathedral in Istanbul into a mosque last month, Turkish President Recep Tayyip Erdoğan ordered the conversion of another iconic Orthodox Church in the city into a mosque today, reports Hurriyet Daily News. The transformation of the church-museum into a mosque will go quickly, as was the case with Agia Sophia, officials say.

The Chora Monastery was built in 534 and is one of the oldest historical monuments in Istanbul. The Holy Savior Church is richly-decorated with 14th-century frescoes and mosaics of the Resurrection, the Last Judgment, and others, that are treasured throughout the Orthodox world. It was originally converted into a mosque a few decades after the Turkish conquest of Constantinople in 1453, and was later converted into a museum following WWII.

A group of American art historians helped restore the church’s original mosaics, and it opened to the public in 1958. Greek hierarch proposes building new Agia Sophia in Greece
Responding to the situation in Turkey, His Eminence Metropolitan Nicholas of Mesogaia and Lavreotiki proposed that the Holy Synod, the Greek state, and the Greek people unite together to build a new cathedral outside of Athens. 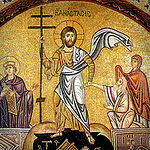 Iconography of the Bright Resurrection of Christ.

Gary8/22/2020 5:06 am
I don't like this turn of events but I can't help but wonder something. Bartholomew doesn't like it when things are taken from him but he stomps all over his Orthodox brothers. Does he not see that what goes around comes around.