The elder Archimandrite Cleopa (Ilie, April 10, 1912-December 2, 1998) is widely known as a great spiritual father of Romanian monasticism and a guide for many laymen, thousands of whom went to him for spiritual aid. We offer here a fragment from the Russian publication of his book The Soul’s Worth, published by the Sretensky Monastery Publishing House. 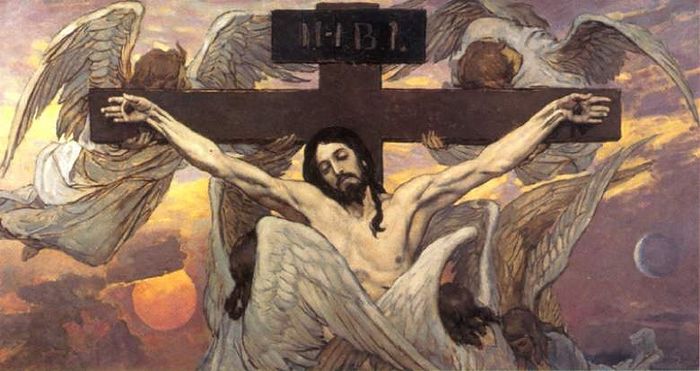 For the preaching of the Cross is to them that perish foolishness; but unto us which are saved it is the power of God.

Every time you heard the word “Cross,” do not understand it as do the foolish sectarians—the Baptists, Adventists, Evangelicals, Pentecostals, Nazarenes, Penitents, Reapers, Feodorites, Jehovah’s Witnesses, and all other sectarians who have filled the world, as blasphemous sectarian tongues that rage in the world and ravage the field of the Word of God.

Don’t think of the Holy Cross as they do, but understand and remember that the word “Cross” has a twofold power and twofold mystery—a twofold Cross with a twofold meaning.

Do not understand the Holy Cross like these shallow-minded and foolish people, who do not want to venerate the saving Cross of Christ, as the holy apostle Paul says. Let them blaspheme, for satan has darkened them, has placed his seal on their foreheads first of all—that is, where the brain is located, so they might not believe. He has placed his seal on their right hand, so they might not raise it to their foreheads to bless themselves with the saving sign of the most honorable and lifegiving Cross of Christ.

One Cross is material, visible, and the other—mysterious, mystical, and invisible, which we carry in our hearts. In the Holy Gospel we hear it said that His mother, and His mother's sister, Mary the wife of Cleophas, and Mary Magdalene stood by the Cross (Jn. 19:25).

Do you hear? They stood by His Cross. Therefore, understand that to stand at His Cross does not mean to stand by the spiritual cross, but by the material, wooden Cross of Christ, by which stood the Mother of the Lord, Mary the wife of Cleophas, and Mary Magdalene.

When you hear: Come down from the cross (Mt. 27:40), this also means the wooden Cross of Christ on which He was crucified. And when you hear: And they took Jesus, and led Him away. And He bearing His Cross went forth into a place called the place of a skull, which is called in the Hebrew Golgotha (Jn. 19:16-17), let us also understand the material Cross. The Savior bore it on His back.

And when you hear that the Jews went to Pilate and asked him: “Break the legs of those who were crucified so we can take them down from their crosses that the Sabbath day might not find them” (cf. Jn. 19:31), for that Sabbath was a high day for the Jews, let us also understand here the same wooden Cross, and not a spiritual cross.

And when you hear Christ in the Gospel saying: If any man will come after Me, let him deny himself—that is, love for himself, which binds us all very strongly—and take up His cross, and follow Me (Mt. 16:24), here we understand the spiritual cross which our Savior Jesus Christ bore before all, not on His shoulders, but in His soul.

When you hear from the Evangelist Matthew: He that taketh not his cross, and followeth after Me, is not worthy of Me (Mt. 10:38), then understand not a wooden cross, but a spiritual, invisible cross.

So keep in mind that Christ bore a twofold Cross: one in the soul: suffering, patience, piercing pain, shame, spitting, sorrow, and grief. Everything that He bore in His soul made up the spiritual cross of our Lord, God, and Savior Jesus Christ. And the second, wooden Cross, He bore on His shoulders and by His will was crucified upon it for the salvation of the world.

So, know that when sectarians assault you because of the Holy Cross, they confess only the second cross, the cross of sufferings, and not the material one. We also recognize the first one, for Christ bore it. He bore the wooden Cross on His back and the cross of suffering in His soul even unto death—the death on the Cross.

Man is twofold, and he must bear a twofold cross, as St. Ephraim the Syrian and St. Cyril of Jerusalem point out, saying:

“O Christian, begin no work until you have blessed yourself with the sign of the holy Cross. When you set off on a journey, when you begin work, when you go to learn to read and write, when you are alone and when you are with people—seal your forehead, your body, your chest, your heart, your mouth, your eyes, and your ears with the holy Cross, and let everything be sealed with the sign of Christ’s victory over hell. Then you will no longer fear witchcraft, hexes, and spells, for they melt at the power of the Cross, like wax before a fire, like dust in the face of the wind.”1

Thus, first we spoke of the meanings of the cross, and then of the twofold cross—material and spiritual.

1 Cf. St. Ephraim the Syrian, Homily 107: On the Weapons of a Monk; St. Cyril of Jerusalem, Catechetical Instructions 13.36. The Logic of the Gospel—the Logic of the Cross of Christ
Stories About the Power of the Cross
Today, on the Elevation of the Precious and Lifegiving Cross of the Christ, we present stories about how within the experience of death, Pascha is suddenly revealed. Homily on the Exaltation of the Honorable and Life Giving Cross of the Lord
Archimdrite Kirill (Pavlov)
Made a little lower than the angels (cf. Ps. 8:6), the king to whom were subject all the earthly animals, man in paradise did not consider himself pleased with his state. Man desired what was not according to his organic, created nature, and thus was the first great sin committed.
Comments
×