Why Is Charity Important?

Regarding the Holy Apostle Paul’s Second Epistle to the Corinthians

From the very earliest days of the existence of the Church, acts of mercy and charity were an essential part of church life. Our Lord Christ Himself said that whosoever has fed the hungry, given drink to the thirsty, welcomed the stranger, clothed the naked, visited the sick and imprisoned, has done those things for Christ Himself (see: Matthew 25: 31- 40). After Apostolic preaching began in Jerusalem, Christians who were possessors of lands or houses sold them, and brought the prices of the things that were sold, and laid them down at the Apostles’ feet, and distribution was made unto every man, according to his need. (Acts 4: 34–35). Moreover, daily meals were organized in Jerusalem (and later in other cities) for the needy. Once, this even caused a dispute between natives of Jerusalem and the so-called Grecians – who were also Christian Jews, but who lived in various Greek cities in the Diaspora. (see: Acts 6: 1–7). The Grecians considered that their widows were neglected in the daily ministration. (Acts 6: 1). Therefore, the

Apostles decided to choose from among the faithful seven men of honest report to take on the responsibility of seeing to charitable activities, as it would not be good for the Apostles themselves to leave the word of God and serve tables (Acts 6: 2).

In addition, in some cities there were Christians who cared for the needs of other Christian communities. From the Book of Acts, we know that believers in Antioch, every man according to his ability to send relief uno the brethren which dwelt in Judaea; which also they did, and sent it to the elders by the hands of Barnabas and Saul (Acts 11: 29–30). If you consider that the original Christians of Jerusalem were capable of sustaining themselves and their needy (see: Acts 4: 34–35), the later collections of donations for the Church of Jerusalem evidence the fact that the Jerusalem community had begun to experience severe difficulties. The cause of those difficulties was the onset of famine in Palestine.

Acts of Charity were strictly voluntary

It was not only Antioch that took part in collecting donations for Jerusalem. We know from the Apostle Paul’s Epistle to the Romans that it hath pleased them of Macedonia and Achaia to make a certain contribution to the poor saints which are at Jerusalem (Romans 15: 26). Likewise, a collection of donations was carried out in Galatia (now part of Turkey), and later, in Corinth: Now concerning the collection for the saints, as I [i.e. the Apostle Paul] have given order to the churches of Galatia, even so do ye. Upon the first day of the week let every one of you lay by him in store, as God hath prospered him, that there be no gatherings when I come… (I Corinthians 16: 1–2). The phrase “have given order” does not mean that the alms were compulsory, and that all had to participate, by an order set down by the Apostle. Twice, the Apostle specifically speaks of voluntary participation in the fundraising: And herein I give my advice: for this is expedient for you, who have begun before, not only to do, but also to be forward a year ago. (II Corinthians 8: 10) and every man according as he purposeth in his heart, so let him give; not grudgingly, or of necessity: for God loveth a cheerful giver (II Corinthians 9:7). We can see from those words that the Apostle is merely calling for the Corinthians to complete what they had already proposed one year earlier, and is reminding them that good kind work should be done out of kindness, and done voluntarily. Moreover, he also reminds the Corinthians about fundraising because he is aware of their material well-being at that time. And here follows the Apostle’s

The Theology of Christian Philanthropy 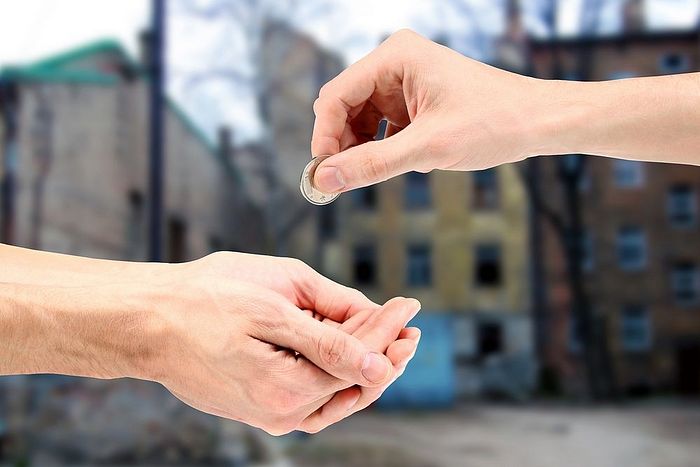 According to the Apostle Paul, monetary donations for the benefit of others, often total strangers, become more than just a gesture of generosity. The idea of active charity and love for our neighbors is a fundamental motif throughout biblical texts. However,the Apostle Paul views charity through the prism of Christology, teachings about the Lord Jesus Christ, and ecclesiology, teachings about the Church.

The voluntary nature of donations, the idea of mutual assistance, of the requirement that it be from surplus (especially in favor of those who are deprived of such surplus) takes second place in the Apostle’s principal arguments.

The Apostle Paul writes: For ye know the grace of our Lord Jesus Christ, that though He was rich, yet for your sakes he became poor, that ye through his poverty might be rich (II Corinthians 8: 9). What do these words mean? The Son of God, being God and having the entirety of Divine Glory, becomes man, just like us — to accept dishonor, suffering, and death for our sake. This is the meaning of the words about wealth and impoverishment of Christ.

In Theology, there is a special term, “kenosis,” which in translation from the Greek literally means “emptying, exhaustion.” Christ emptied Himself, so that man might take on the fullness of life, Christ became impoverished, so that we might be enriched with Divine Grace. Christ gave up His life, so that we might be rid of death. Therefore, Christians should not be afraid to share something of themselves, to impoverish themselves at least partially in some way for the good of others. Especially so, as believers have acquired an entirely different kind of wealth: in Christ they were enriched in all utterance and all knowledge (I Corinthians 1: 5). That is the treasure in Heaven of which the Lord Jesus Christ spoke, where neither moth nor rust doth corrupt, and where thieves do not break through nor steal (Matthew 6: 20). One who bestows with joy and love receives even greater benefits from God: And God is able to make all grace abound toward you, that ye, always having all sufficiency in all things, may abound to every good work (II Corinthians 9: 8).

Mutual assistance and beneficence to one another become a reflection of the unity of the Church. The Apostle writes: For the administration of this service [i.e. fundraising] not only supplieth the want of the saints, but is abundant also by many thanksgivings unto God; Whiles by the experiment of this ministration they glorify God for your professed subjection unto the Gospel of Christ, and for your liberal distribution unto them, and unto all men; And by their prayer for you, which long after you for the exceeding grace of God in you. (2 Corinthians 9: 12–14).

The Church is filled with many quite different people, but at the same time remains one Church. In practice, unity is manifested in joint prayer, and therefore the main sign of unity of the Church is the joint prayer of believers at the Divine Liturgy, before the Chalice containing the Body and Blood of Christ. However, we pray not only for those people who surround us in the Temple. We pray for Christians in general, for all members of the Church. According to the Apostle Paul, mutual assistance further encourages us to pray for one another. Charity and prayer for each other become bonds of love, binding various Christian communities to one another.

Doing good not only for your own people

It is important to remember the Christian communities in Rome, Corinth, Galatia, Macedonia, and other cities in which the Apostle Paul and his companions preached, were communities of gentiles who had come to the Faith. Yet they raised funds for former Jews, Christians of Jerusalem. In the Epistle to the Romans, there are especially important words explaining why former gentiles were zealous in the matter of charity towards Jerusalem. For if the gentiles have been made partakers of their spiritual things (in the spiritual promises made by God to the Israelites), their duty is also to minister unto them (unto Christians from among the Jews) in carnal things. (Romans 15: 27).

The people Israel are the people of God, from ancient times chosen to bring the light of Faith to the gentile peoples gone astray. Associated with this were very strict regulations in the Old Testament, which the

people Israel had to observe in order to preserve their faith. Now, the promises given by God to the chosen are being fulfilled in the Church, which has become the spiritual Israel, the chosen people, into which they enter not by right of origin or birth, but by faith in Christ. According to the Apostle Paul, in a certain sense, those pagans who have come to the FAITH owe a debt to the people of Israel who became believers, for the Israelite people bore all of the difficulties of the Old Testament in anticipation of the coming of the Savior. Therefore, in accepting in the Church of Christ benefits in equal measure with the people Israel, the former pagans can serve them from their riches, as it were thanking them for the hardships and difficulties they once suffered.

This is such a deep theological and spiritual meaning the idea of Christian charity takes on in the second epistle of the Apostle Paul to the Christians of Corinth. But the works of love and charity retain that same meaning for us, Christians of the 21st Century, especially as the number of people in need of our acts of love has not diminished at all from the times of the Apostle Paul and ancient Corinth and Jerusalem, The Mystery of a Merciful Heart
Igumen Nektary (Morozov)

The Mystery of a Merciful Heart
Igumen Nektary (Morozov)
Today the fast is too often understood as someone’s “private affair”, “making efforts to improve” and “growth time”. And in some sense it is so; meanwhile, if no one except us feels the benefit of the fast, what is it worth? Be Merciful
Fr. Theodore Lyudogovsky
Christ promises a great reward for the fulfillment of His words: Ye shall be the children of the Highest. What could be higher than that? Christ is the Son of God, and we will be sons of God. “O Lord, give me ten kilos of chicken!” Alexandra Sinyak Talks About Feeding St. Petersburg’s Elderly Poor
Peter Davydov, Alexandra Sinyak
Those who were not indifferent wrote that they were willing to help as far as possible. And they did—some brought bread, others brought meat, others decorated the caf&#233; for the New Year and the Nativity of Christ and donated over 1,000 presents. It was a true miracle. We realized that we are not alone.
Comments
×