We Are the Kindred of the Lord Jesus Christ

A Homily on the Eve of the Nativity of Christ 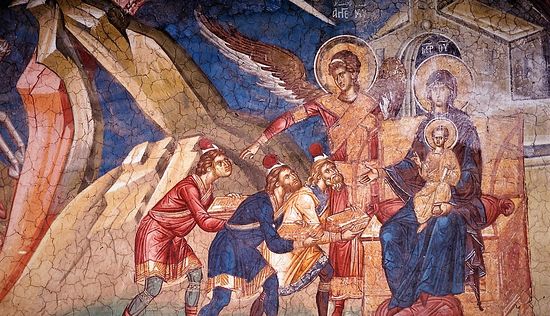 The adoration of the Magi

We are beginning to celebrate the feast of the Nativity of Christ, the appearance in the flesh of our Lord Jesus Christ. He appears as a babe, incarnate from a seedless womb and lying in a manger. God came down to earth to raise His creation, man, to Heaven.

He became not only our Creator, but also our kinsman in the flesh. In Adam, we became His kindred in the flesh. When we have some relative, any person, whom we love and respect, we constantly look at them in our lives and think so we wouldn’t offend them in any way, to please them, to be worthy of the fact that we are near to them.

In the same way, the life of a Christian should be filled with the memory of Him Who is our Creator, but Who is also one of us. God Himself came down from Heaven and became man, and at that moment, we all became His kindred according to the flesh. When we behave poorly in some way, we thereby offend our loved ones, our kinsmen.

And every time we sin against those near to us, we offend God as well, Who descended to earth today and was incarnate with but one purpose—to raise us to Heaven. We are heirs of Heaven and kindred of our Lord Jesus Christ.

The kings and magi came and offered Him gifts—gold, frankincense, and myrrh—and today we come and offer love, mercy, humility, meekness, and the sweet fragrance of our prayers to God, and this grace should accompany us throughout the days of our lives and unto the end of the age, by the mercy of the Creator, Who came down from Heaven and raised sinful, dying, and fallen man to Heaven, to the Kingdom of God—the Creator Who was not ashamed to become man and showed boundless love to save His beloved creation. The Star of Bethlehem
A sermon at the Royal Hours of the Nativity of Christ
Hieromonk Irenei (Pikovsky)
The star led the Wise Men as far as Jerusalem and then disappeared for a while. After the high priests and scribes had pointed to Bethlehem as the birthplace of the Leader of Israel and the Magi left King Herod, the star reappeared and showed the Persian Magi the exact location of the house of the Christ Child and Mary. Miracles on Christmas
Olga Rozhneva
The Nativity of Christ is a festival of extraordinary kindness and warmth, when all of us, like children, wait for miracles. And the Lord as a loving Father comforts us and grants us miracles, as testified by your miraculous Christmas stories, our dear readers. What We Do on the Day Before Christmas
Hieromonk Job (Gumerev)