So Much Depends on Us 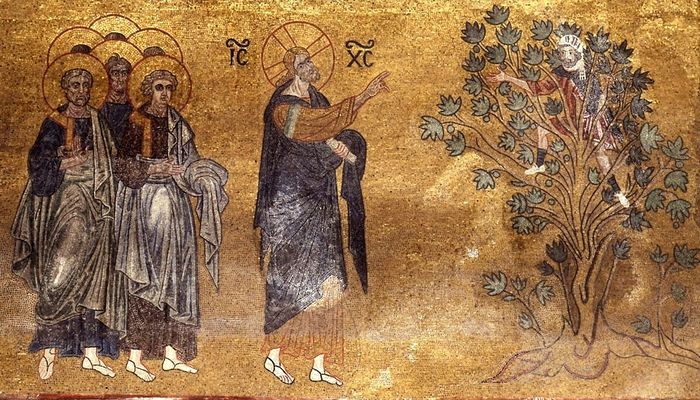 In the Gospel for the Sunday of Zaccheus we are told that the in the city of Jericho lived Zaccheus, the chief tax collector and a rich man. I remind you that tax collectors were people who collected tribute for the benefit of the Roman government (the Jews at that time were an enslaved people, and under Roman rule), and they even kept part of that money for themselves. For that reason, they had a very bad reputation among the people and their leaders, the Pharisees. Even associating with them, and especially with the chief tax collector, was perceived as undignified and impure. On the other hand, the tax collectors could always report on others to the rulers and do all sorts of meanness. Therefore Zaccheus was looked upon with hatred, fear, but at the same time with a certain respect.

And so this Zaccheus was, as it says in the Gospel, small in stature. He couldn’t see Jesus because of the crowd that had come to meet Him, and so he climbed a tree. If we were to transport ourselves to that time, we could imagine how the surrounding people, especially children, would have reacted. It would be the same as if in our days some respectable personage, known to everyone as a boss, were to suddenly climb a tree. Probably some twisted their fingers at their temples, others sniggered, yet others laughed—but Zaccheus at that time was in such a state of blessed obsession that his desire to see Jesus made everything contradictory to this insignificant. At that moment he was not thinking at all about what impression he was making on people, or on Jesus Himself. If we look hard at ourselves, we will discover that we don’t have that kind of desire to meet God; for us it is always accompanied by various reservations. When a person bears the podvig of foolishness for Christ; or, not considering himself a fool-for-Christ in the least but out of love for God commits foolish acts, he is then in the rank of Zaccheus. When calculations and comparisons begin, such as, “Will it be convenient, will it be decent, and what will people say about me?” it means that we have not reached the measure of Zaccheus.

And when the Lord saw Zaccheus, He said, To day I must abide at thy house (Lk. 19:5)—and Zaccheus received Him with joy. The Pharisees—and not only the Pharisees—murmured against the Lord and said that He had come to the house of a sinful man.

But Zaccheus’s repentance continued to deepen. He said, Behold, Lord, the half of my goods I give to the poor; and if I have taken any thing from any man by false accusation, I restore him fourfold (Lk. 19:8). This is about us, about our own choice: Should we amass everything for ourselves, or give it to the poor. For this we don’t necessarily have to be rich in the monetary sense. Everyone can apply this to himself and think about the measure to which he gives everything he can give, and to what degree he has latched himself onto what he has. Let’s pay attention to this: Acts of repentance were coming only from Zaccheus, but his grace-filled transformation was so powerful that the Lord said, This day is salvation come to this house (Lk. 19:9). That is, salvation came to the entire house Church, as we might put it today, which was saved through the Lord’s spending time in it. And the Lord concludes with the words, For the Son of man is come to seek and to save that which was lost (Lk. 19:10). This, if we can use the expression, is a model for our mutual relations with God. Here it is sufficiently clear what comes precisely from the Lord, and how much depends on the person, how readily he responds to this, To day I must abide at thy house. But before this was Zaccheus’s self-sacrificing resolve to see the Lord. In spiritual life, we often place boundaries around ourselves, and this is what makes us different from the saints, who through their resolve won true membership in the Body of Christ. And Zaccheus at first showed his “steep” resolve and responded to the Lord’s words. Then after his actions came grace, and further he acted on his own. Look at how much depends on each person! How Zacchaeus Reclaimed Paradise
Fr. James Guirguis
Zacchaeus demonstrates his willingness to struggle to know God. He may look foolish as a grown man who is climbing into a tree. He probably got sweaty and dirty. It took effort. But it was all worth it wasn’t it? Zacchaeus Sunday
Luke 19:1-10
St. Theophylact of Ochrid
For the Son of Man is come to seek and to save that which was lost. The Lord seizes the mightiest of the devil’s vessels and destroys his cities. See how the Lord not only makes publicans His disciples, but He even takes prisoner—in order to save him—the chief of publicans, Zacchaeus.
Comments
×