Hundreds of Orthodox faithful flocked to Rila Monastery in western Bulgaria this week to celebrate the feast of the nation’s most beloved and patron saint.

The Orthodox Church celebrates the repose of the venerable 9th-10th century monk St. John of Rila on August 18 on the New Calendar, and this year’s celebration was especially joyful, marking the 1,075th anniversary of his blessed repose, reports the monastery website.

The All-Night Vigil on Tuesday night was presided over by His Eminence Metropolitan Daniel of Vidin together with the clergy of the monastery and visiting clergy. The hymns were chanted by choirs from the Plovdiv Diocese and the Sofia Diocese. The next day, the Divine Liturgy for the feast was celebrated by His Eminence Metropolitan Seraphim of Nevrokop with Met. Daniel and the monastery abbot His Grace Bishop Evlogy of Adrianople, together with the ordained brothers of the monastery and visiting clergy.

Following the service, Met. Seraphim read the address of His Holiness Patriarch Neofit of Bulgaria on the occasion and thanked all those who came to “glorify our Heavenly patron, St. John the Wonderworker of Rila … in gratitude to our Triune God—Father, Son, and Holy Spirit.”

In his testament to his disciples, St. John emphasizes the need for the Bulgarian people to pray and remain in the Orthodox faith and in the unity of the Church, Met. Seraphim emphasized.

He also thanked Bp. Evlogy and the monastery brotherhood for their hospitality. In turn, the abbot spoke of St. John as a great protector of the Bulgarian people and the Bulgarian Orthodox Church over the course of 11 centuries. St. John is honored today as the patron of Bulgarian people and one of the most important saints of the Bulgarian Orthodox Church. He reposed in 946 AD in the seclusion of his monastery, and was canonized soon after his death.

Shortly after his repose, his wonderworking relics were transferred to Sofia during the reign of Peter I. After the Magyar King Bela III conquered Sofia in 1183, St John’s remains were sent to the Hungarian capital Esztergom and remained there for 4 years before being returned to Sofia in 1187.

In 1194, the Bulgarian Tsar Ivan Asen I ordered the remains to be moved to his capital, Veliko Tarnovo. Surviving the Turkish conquest of the city in 1393, they were returned to the Rila Monastery in 1469 with the permission of Sultan Murad II, where they remain today.

Two weeks ago, Orthodox pilgrims prayerfully walked on foot from the capital city of Sofia to the monastery—a distance of about 75 miles that symbolically repeats the transfer of the relics of St. John of Rila. The faithful arrived in time for the feast of the Transfiguration. The Testament of St. John of Rila Repose of the Venerable John the Abbot of Rila

Repose of the Venerable John the Abbot of Rila
Saint John of Rila, the great spiritual ascetic of the Bulgarian Orthodox Church and Heavenly Protector of the Bulgarian nation, was born in the year 876 in the village of Skrino in the Sredets district [now Sofia]. 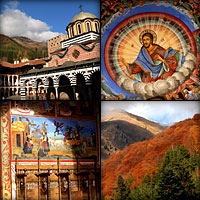 Autumn photo sketches of Rila Monastery
The main holy place of Bulgaria is Rila Monastery at which the relics of Venerable John, the Wonderworker of Rila and patron-saint of this Orthodox country, rest.
Comments
×