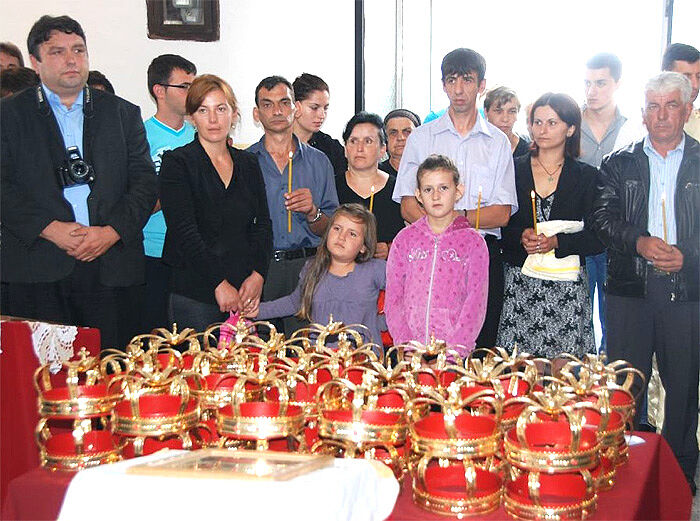 We’ve already said that God created man and settled him in Paradise, where he existed naturally, being in a healthy relationship with his wife Eve. Their goal was not the birth of children, but the knowledge of perfection, the comprehension of God’s perfect love, which is the main goal of marriage. Therefore, every Mystery of the Church, including marriage, is celebrated for the forgiveness of sins and the acquisition of eternal life. Therefore, marriage is a Sacrament, a charisma, which God blesses and gives us in the Church. Therefore, the Church blesses marriage and considers the family the place where a man goes to reveal his destiny.

Ultimately, the goal of marriage is to overcome itself—to overcome marriage, and not to turn it into an idol, to look at it as a means designed to lead you to God. Love in marriage isn’t canceled, because Divine love doesn’t cancel love for man and our love for each other; it doesn’t cancel either marital love or love for children, but on the contrary, makes human love stronger, firmer, purer, and healthier, and makes it truly perfect.

Today we’re going to talk about several more practical questions, touching on the problems a man faces in marriage. We know that the passions we’re called to fight against—the main ones, those that fight against a man and from which the other passions are born—are three: love of glory, that is, egotism, avarice, and carnality.1 Why do we consider these the main ones?

From the teaching of the Fathers of the Church and from their experience, and most importantly, from the holy life of Christ described in the Gospels, it’s clearly shown that the devil fought against Christ using these three temptations. The first is the temptation of egotism, vaingloryt, conceit, and pride: If thou be the Son of God, cast thyself down from hence, he tells Him (Lk. 4:9). The second thought, that of carnality, we see when the devil proposes that Christ turn stones into bread. And the third temptation, avarice, is when the tempter offers Him the riches of the entire world. Of course, Christ rejected all three of these temptations and thereby defeated the devil. These three temptations also arise before every man—egotism from which all the other passions are born, and also avarice, and carnality.

On the other hand, we also have three charismas, the three highest virtues of the Holy Spirit, namely faith, hope, and love—they go together. Faith is the foundation upon which hope and love are anchored, just as egotism is the foundation from which are born the other passions—avarice and carnality. Thus, a family man who is striving for perfection in Christ will have to fight, just like every struggling Christian, whether monastic or layman, with these three great and main passions. The first passion, as we have said, is egotism. How does it manifest itself in practice? What does it mean? The word itself gives us the answer—“egotism,” that is, everything revolving around our “ego”: “Only me, and no one else! That’s what I think, that’s what I want, that’s how I like it. I want it to be that way!” All this, which naturally stems from the egotistical attitude of man, doesn’t allow the egotistical man to love strongly, it doesn’t allow him to fall in love. It’s because he can’t overcome himself; he’s closed up in his egotism, in his individualism. The egotistical man can neither love nor humble himself. And how could he humble himself when he’s an egotist? He can’t even he acknowledge his own mistakes, because he always justifies himself in everything.

The egotist can’t communicate. He’s incapable of it, because in order to communicate with someone else you have to go beyond yourself, you have to hear the other. But to hear another—and to hear him exactly—you first of all have to be silent, having no thoughts, no intentions, no prejudices, no predispositions towards anything, so you can easily put yourself in the other’s position.

I recently heard an American proverb that says, “If you want to understand someone, walk a mile in his shoes.” That is, to understand someone, you have to come down to where he is, or climb up if he’s standing high. To understand someone, you have to see how he grew up—his age also matters, and even the difference between the sexes. Man and woman are not the same: he has one psychology and she has another; he has one biology and she has another. Age also plays a role. A man of twenty is one thing, and a man of thirty, forty, fifty is another. A man who grew up in one environment is different from someone who grew up in another. Even the place we come from matters. Indeed, it’s been observed a thousand times. The place where a man grew up also matters: which city, which village, under what circumstances.

To be able to communicate with another, you have to understand him, to put yourself in his shoes, to become one with him. The proof of this is Christ. Christ could have saved us still in Heaven. He could have saved us by sending the Gospel here or some other way. There’s nothing difficult for Christ. He didn’t do it, however. He absolutely, completely became Man, like us, so that—precisely after we turned out to be powerless—He could save us; so we’d be able to unite with Him and to show us the true path of communication. He became Man for our sakes.

Egotism is one of the most significant factors destroying marriages, and we see this all around us every day. Egotism breaks every connection a man has: with God, with himself, with others around him, and even more so with his companion in life, and with his children.

How can we fight with egotism? By humility. In the monastic life, humility is inculcated through obedience, and in marriage—by cutting off your own will. This is where a man begins—cutting off his will. You go to do something—you sacrifice what you want, you do something that someone else tells you. You sit down to listen to him, you give him time so he can tell you what he wants to say, and even if it seems ridiculous and insignificant to you, you mustn’t consider it comical—you have to take it seriously, because it’s serious to the other person.

If you don’t learn to humbly accept the arguments and realities of another, then you’ll of course break off any possibility for communication with them. You have cut off your own will—in the smallest things, for example, doing some work around the house, fulfilling your obligations, sacrificing your comfort at that moment, overcoming all your thoughts of, “This is what I think,” “I want it like this.”

Yesterday I was asked what happens with a child’s upbringing when one parent says one thing, and the other says another. So what happens? What we have here is two egotistical parents who will in the end spoil their child, because neither of them humbles themselves to say: “My husband has the right to raise our child too,” “My wife has the right to raise our child too. I’m not the only one who knows how and what to do.” For example, the mother says something about the child. The husband shouldn’t immediately contradict it and demand that his wife agree with him at any cost.

As we have said, the father behaves himself differently, and the mother has a different behavior and place in the child’s psychology. When you disagree with someone and you think that only you know everything and only you can speak about raising a child, then you are, without a doubt, debasing your partner. And the other one will either shut up, or if it’s the husband, he’ll take the newspaper and say: “Raise him yourself! If you want me to give him a bath, call for me!”

Or maybe they’ll start shouting and swearing, and so on, and there’ll be chaos in the house…

1 The term used in the Russian translation, “сластолюбие (slastolyubie)” could be literally translated as “love of pleasure” or “pleasure seeking,” though it should not be taken to mean a blanket condemnation of any material pleasure. Rather, as Metropolitan Athanasios explains, it concerns taking physical needs and pleasures as ends in and of themselves, rather than means to an end. Thus, a person who suffers from this passion doesn’t simply lead a life in the flesh, but rather lives for the flesh, and this applies not only to sexual relations, but also to other areas, such as the consumption and enjoyment of food, as Metropolitan Athanasios makes clear in this article.—Trans. Husbands, Love Your Wives
Archpriest Andrei Ovchinnikov
We could talk about family life for a very long time, and such talks are necessary. Family should enter our consciousness as the greatest value, which we must preserve and protect with all our might; and our children and grandchildren should constantly hear about it. We should begin serious conversations on adult life with our children from the earliest years.
Comments
×