The Garments of God and Man 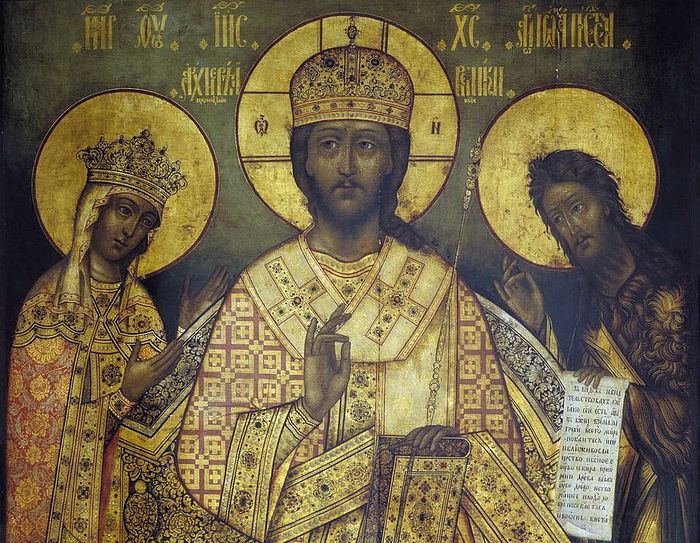 “The Lord is King, He is robed with majesty”—we hear this prokeimenon at the All-Night Vigil for Sundays. This verse from the Psalter is understood by Church commentators as a prophecy of the resurrection of Christ,1 and therefore it’s sung in the services for every Sunday. It’s interesting that the Psalmist here uses the image of dressing God in various garments: The LORD reigneth, He is clothed with majesty; the LORD is clothed with strength, wherewith He hath girded Himself: the world also is stablished, that it cannot be moved (Ps 92:1). Having reigned (resurrected), Christ is adorned in the beauty and power of His Divine glory, as though hidden until His Resurrection. He girds Himself, which in the ancient world was the final step in being robed. The girding of the Lord can be understood as the final “deposition of the opposing powers,”2 as the complete victory of Christ over the enemies of God and man. Jesus, clothed in beauty and power, is the King of the universe, which He has established such that none can shake or destroy it.

Holy Scripture uses the image of adorning God in this or that clothing quite often, emphasizing different facets of God’s glory and perfection or indicating some action of God in relation to man. Thou art clothed with honour and majesty. Who coverest Thyself with light as with a garment (Ps. 103:1-2), David sings to the Most High. For He put on righteousness as a breastplate, and an helmet of salvation upon His head; and He put on the garments of vengeance for clothing, and was clad with zeal as a cloak (Is. 59:17), preaches Isaiah. Of course, prophetic words about adorning God don’t at all mean that God changes or acquires something He didn’t have. The Lord is perfect and in need of nothing. As already mentioned, such passages in the Bible reveal to us God in His actions, aimed at the salvation of mankind; they reveal certain qualities inherent in the Godhead.

It’s completely different when Scripture calls us to clothe ourselves. In this case, clothing means the virtues that we have to acquire. Be clothed with humility: for God resisteth the proud, and giveth grace to the humble (1 Pt. 5:5). Put on therefore, as the elect of God, holy and beloved, bowels of mercies, kindness, humbleness of mind, meekness, longsuffering (Col. 3:12). Put on love, which is the bond of perfectness (Col. 3:14). Here we’re talking about a change in ourselves, about changing the clothes of sin into the clean clothes of a God-pleasing life.

It’s not in vain that Scripture calls us to be clothed. Indeed, Christianity clothes men, robing them in virtues and holiness. Sin disrobes. Removing the clothing of virtues from a man, sin leaves him naked, weak, ugly. It’s not without reason that after Baptism a man is clothed in a white robe, which symbolizes spiritual purity and renewal. But sin removes this robe of grace, and the Christian becomes a naked emperor. Everyone around can say how wonderful and beautiful he is, as the king’s servants say in the famous tale: “What wonderful clothes the king has, what exquisite fabric!”—but in fact, the king was naked. So the sinner remains naked and unsightly in the eyes of God, although he can think of himself however he wants and even be esteemed among men. Just as in Revelation, Christ commands the angel to write to the Church of Laodicea: Because thou sayest, I am rich, and increased with goods, and have need of nothing; and knowest not that thou art wretched, and miserable, and poor, and blind, and naked (Rev. 3:17).

The following commandment of the Bible speaks about this return of former garments, quite unusually: But put ye on the Lord Jesus Christ, and make not provision for the flesh, to fulfil the lusts thereof (Rom. 13:14). It’s interesting that the Church presents to us this counsel of the Apostle Paul on the eve of Great Lent, in Cheesefare Week. That means the Church is calling us to repentance with these words. In fact, all Christians have already put on Christ in the Mystery of Baptism. For as many of you as have been baptized into Christ have put on Christ (Gal. 3:27), we sing in the service of Baptism. If we have already put on Christ once, in Baptism, then why does the Church again advise us, the baptized, to put on Christ? There is one answer—after Baptism, we have lost the garment of Christ’s grace through sin. We acquire these clothes again only in the Mystery of Confession, which is called our second Baptism for a reason. To “put on Christ” after Baptism means to repent.

And here’s another spot related to clothing. In the Epistle to the Ephesians, the Apostle Paul calls Christians to put on the full armor of a Roman soldier (cf. Eph. 6:11-17). What for? To successfully fight against principalities, against powers, against the rulers of the darkness of this world, against spiritual wickedness in high places (Eph. 6:12). Every detail of the armor gets its interpretation from St. Paul. The belt is truth, the breastplate is righteousness, shoes are readiness to preach, and the shield is faith. Putting on the armor ends with donning the helmet of salvation and taking up the sword—the word of God. This is a real Christian—a warrior of Christ, a soldier of the army of God, regardless of gender and age. He is protected by truth and faith, admirably wielding the sword of Divine words, ready to withstand an attack and to attack. Alas, we often lose the military outlook of a Christian and we perceive the spiritual life as a sweet candy that we get through the rustling wrapper of prayer and the Church Sacraments.

Sometimes the Lord Himself dresses a man. It is God that girdeth me with strength (Ps. 17:33); For Thou hast girded me with strength unto the battle (Ps. 17:40), sings David. He that overcometh, the same shall be clothed in white raiment (Rev. 3:5), Christ promises to the Christians of the Church of Sardis, and to all who learn to overcome the devil’s machinations and their own passions. You can also buy clothes from God. I counsel thee to buy of Me gold tried in the fire, that thou mayest be rich; and white raiment, that thou mayest be clothed, and that the shame of thy nakedness do not appear (Rev. 3:18), the Lord addresses to the Church of Laodicea, and through it to all of us who suffer from spiritual nakedness and a lack of virtues. How much does God’s clothing cost? The Lord has no price list—pay as much as you want, but understand that how much we bring determines how we’ll be dressed. If you give your entire self to the Lord, you’ll be dressed richly, so the clothes will last for a long time. But if you pity yourself and you give a little, you’ll be dressed lightly, and winter will come and you’ll freeze.

The motive of dressing in new clothes will remain relevant for us even after death. For this corruptible must put on incorruption, and this mortal must put on immortality (1 Cor. 15:53), promises the Apostle Paul. Our corruptible body becomes incorruptible, and our mortal nature will inherit immortality if we adorn ourselves with the virtues offered to us by the Lord during our lifetime. If we dress ourselves here, we’ll be dressed there. Therefore, we have to call Christ into our lives, Who will clothe us in new garments of holiness and purity, so we wouldn’t be shamefully expelled from the royal feast for inappropriate attire, but would share in the Heavenly rejoicing with all those who partake of it. And for this we live, we hope, we believe, we pray, we labor, we rejoice in the Risen Christ, but at the same time we sigh, desiring to be clothed upon with our house which is from Heaven (2 Cor. 5:2).

1 “Since Christ, when He was put to death according to the flesh, had, according to Isaiah, neither appearance nor beauty; therefore, after His Resurrection, He was clothed in the splendor and incomparable beauty of incorruption, according to Theodoret and Apollinarius.” Euthymius Zigabenus’s interpretation of Ps. 92:1 A Well of Humility
Met. Athanasios of Limassol

A Well of Humility
On Humility, Part 4
Metropolitan Athanasios of Limassol
The humble man is incomprehensible in his greatness, because through humility, the Lord Himself is present with him, and he becomes like God. The Mystery of Primordial Paradise. Part 1. What is life in Paradise like?
Priest Valery Dukhanin

The Mystery of Primordial Paradise. Part 1. What is life in Paradise like?
Priest Valery Dukhanin
Divine Revelation tells us that God didn’t place man in the primordial Paradise to relax under the palms and pick the fruit of the trees of Paradise.
Comments
×