How St. Nicholas Saved Two Girls from a Terrible Sacrifice

A miracle of our own times Rejoice blameless provider for three maidens;
Rejoice fervent guardian of purity.
Rejoice hope of the hopeless;
Rejoice delight of the whole world.
From the Akathist to St. Nicholas the Wonderworker (Ikos 5)

Probably all of us could tell some story about miraculous help we’ve received in our lives from St. Nicholas the Wonderworker. He is truly a great intercessor and pleaser of God, who helps people in all different situations.

I was fortunate to hear first-hand one story of help from the extraordinary God-pleaser, similar to the famous story of how he helped a father with three daughters when he “gave maidens three cold coins in a wrapper and thus delivered them from a sinful fall.”

In the 1990s, times of stagnation and lawlessness, the father of one family fell seriously ill. He was taken to the hospital, but the doctors warned them ahead of time that they would take him, but the family would have to bring the medicine, because they had absolutely nothing there to give to him. At that moment only the two young daughters were living at home. Their mother had left for another country to work so that the family could at least be fed, because they had been left during those years with practically nothing to live on.

The situation became threatening—their father was getting worse by the day. Finally, the doctor warned them that their father was dying, and if the daughters could not bring the necessary medicine his days would be numbered. A sum was needed that was large for those days, and the daughters simply didn’t have it. Their mother was far away, and they were able to reach her only by letters, and who knows when they would arrive. The poor daughters asked everyone they knew for a loan, but they didn’t manage to find any money.

The girls were desperate. Then they happened to learn that there were buses coming from Greece, and for one night with a driver they could receive exactly the sum they needed to save their father. When they heard that their father’s life was hanging on hours, out of desperation they decided to sacrifice their honor in order to save their ardently beloved father. They took with them a girlfriend who was to take the money up front and leave with it in order to avoid being defrauded, and went to the stop where the drivers were supposed to arrive. But no buses came, not that day nor the next. (As they found out later, there was a break down on the road and the buses arrived very late.) When they returned home their friend, a religious girl, said:

“I prayed very hard to St. Nicholas to keep that from happening!”

“What have you done? What will happen to our father?!” they replied.

The girls didn’t go to the hospital because they were afraid to hear bad news, but went home instead. And there it turns out that a distant relative had arrived after learning about their father’s condition, and was ready to give them the money they needed. Beyond themselves with joy, the girls bought the medicine and ran to the hospital in time to save their father. That relative then helped them with a car to take their father home. That is how the merciful God-pleaser kept the girls from committing an irreversible act, and saved them from that terrible sacrifice.

St. Nicholas the Wonderworker helps even without medicine. One day, when I was just beginning to enter into church life, I felt very bad. There were no medicines at home, and we had no mobile phones then to call friends or family—so as my last hope I called out with faith to St. Nicholas, to whom I’d never turned before for help: “St. Nicholas the Wonderworker, help me!” That very moment, just as I said it, my condition took a sharp turn for the better, as if I had taken a fast-working, effective medicine. It was just amazing! I will always remember the time and place where this happened.

This was my first experience of turning to that great saint in times of trouble. Later I would turn to him many times and always receive help.

One day, when I was seriously ill but didn’t have the means to get medical care, we began to pray to St. Nicholas the Wonderworker—and the saint did not put us to shame. My husband found a large bill on a busy street. No one was searching for money. My husband stood there asking people whether they had lost any money, but he couldn’t find the owner, so he went home. My doctor visit cost exactly what my husband had found. We were able to pay the doctor with that very bill.

Recently I again had recourse to this amazing God-pleaser’s help. I had to go to another city. Because of the pandemic I didn’t want to risk riding a packed bus, and we couldn’t afford a taxi. Hoping in God’s help, I went to church and asked St. Nicholas the Wonderworker. I hadn’t even gotten home before my son cheered me up, telling me that the husband of our acquaintance was driving to that city and he could take me. The trip that usually takes six hours we finished in four, and were not tired at all. And as it turns out, the driver’s name was Nicholai! Upon arrival we went to church to thank the saint for his speedy help.

St. Nicholas the Wonderworker, “most glorious intercessor in troubles, and great protector in misfortunes,” help us always in our needs and sorrows, and do not leave us bereft of your merciful aid! 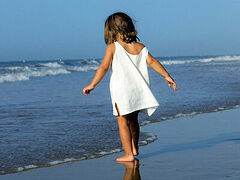 How St. Nicholas Saved Me Twice
Alexandra Gripas
One step, then another, and it seemed harmless, my feet still felt the bottom. Suddenly, there was nothing under my feet! I was able only several times to push myself up from the bottom to get a breath of air—several seconds of fruitless struggle and then emptiness and darkness. 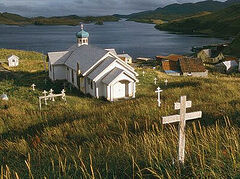 St. Nicholas, Who is Ever Active
On the Presence of St. Nicholas in America and Around the World

St. Nicholas, Who is Ever Active
On the Presence of St. Nicholas in America and Around the World
Elena Zoubareva
Thus, “exuding the precious myrrh of mercy and an inexhaustible sea of miracles to the whole world,” St. Nicholas walks the face of the earth, from Alabama to Buzuluk. There are St. Nicholas churches all across the world, and every family has stories of help from the wonderworker of Myra in Lycia. 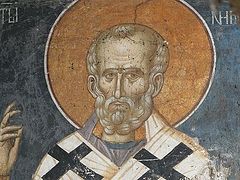 The Joy of Triumphant Love
A sermon on the feast-day of St. Nicholas the Wonderworker
Hieromonk Ignaty (Shestakov)
Whenever he saw untruth, he struggled against it; whenever he saw any injustice, sin, or evil happening to his neighbors, St. Nicholas at once did his best to stop it and help them.
Comments