Let Us Celebrate as Ones Just Baptized

Homily on the Feast of the Theophany of the Lord, delivered in the Church of St. John the Baptist of the bishops’ residence, January 1858 Today we brightly celebrate the Baptism of our Lord. But wouldn’t it be more fitting, brothers, to mourn and sorrow? The Baptism of St. John was a “Baptism of repentance” (Mk. 1:4), And there went out unto him all the land of Judaea, and they of Jerusalem, and were all baptized of him in the river of Jordan, confessing their sins (Mk. 1:5). This means that when Christ the Savior appeared to St. John along with everyone else, He appeared as if a sinner, and visibly He was numbered with the transgressors (Is. 53:12); He, holier than the saints according to His divinity and entirely without part in sin according to his humanity! And from whom does the King of kings and Lord of lords receive Baptism? From one of His servants. I have need to be baptized of Thee, says the amazed St. John, and comest Thou to me? (Mt. 3:14). Such is the self-deprecation in which our Lord presents His Baptism! On the other hand, see how glorious it was for the Lord, and how saving for us.

No sooner had Christ received Baptism from John and begun to emerge from the water than the heavens suddenly opened above Him, the Holy Spirit descended in bodily form “as a dove”, and a voice was heard from the heavens saying, This is My beloved Son, in Whom I am well pleased (Mt. 3:16–17; Lk. 3:22). No one else baptized by John was worthy of that. It clearly showed everyone just who was this Jesus being baptized. Nearly thirty years had passed since the day He was born; He had until then been almost completely unknown—to the Jews, amongst whom He lived, and even to John, to whom He had come for Baptism. Now He was suddenly made manifest to Israel (Jn. 1:31). And how was He made manifest? Solemnly before the face of heaven and earth, in the presence of all who were there to witness His Baptism. How was He made manifest? In all the glory of His divinity, so that when John recognized Him be began to preach about Him to the Jews: Behold the Lamb of God, which taketh away the sin of the world (Jn. 1:29–35). How was He made manifest? In a wondrous, unprecedented, tangible revelation or theophany of the entire Holy Trinity—in order to bear witness to it to the whole world as the true Son of God Who appeared on earth in tangible human form, appearing now in the Jordan; and the Father in a tangible voice addressed to Him, the Son; and the Holy Spirit in the tangible form of a dove descending upon Jesus as He was being Baptized. There is no doubt that not only the lower but also the entire higher world was witness to the glorious and extraordinary manifestation to the world of the incarnate Son of God.

However, no matter how glorious the Baptism of our Lord was for Him, He was nevertheless baptized not for Himself but for us. Not for Himself, because as perfect and sinless according to His divinity and humanity He had no need of baptism. It was for us, because from his very birth, as our Redeemer He took upon Himself the sins of all mankind; and everything He did on earth He did only in order to deliver us from sins. With these sins that are alien to Him yet which He voluntarily took upon Himself, He now comes for Baptism to John. It follows that in the person of Jesus, the whole world was as if baptized by John; in the person of Jesus, in a foreshadowing way the Holy Spirit descended upon all mankind; in the person of Jesus the voice of the Heavenly Father was directed to all mankind: This is My beloved Son, in Whom I am well pleased. For by His Baptism from John, as St. John Chrysostom says: “Having fulfilled the Jewish baptism, Christ opened the door also to the Baptism of the New Testament Church” (Discourse on Matthew 12:3)—the Baptism by which we truly are cleansed of all sin. He opened the door to the Baptism in which the Holy Spirit really does descend upon each person, and all people are truly made sons of the Heavenly Father, sons of God.

With this, brothers, we cannot but celebrate this day when with such glory our Savior was made manifest to the world, and when in His person we were all baptized in the Jordan, receiving the Holy Spirit, the Spirit of adoption, whereby we cry, Abba, Father (Rom 8:15)? May our joy today be conscious and wise. May it be both pure and holy, as is fitting for one just baptized and vouchsafed to receive the Holy Spirit. Amen. 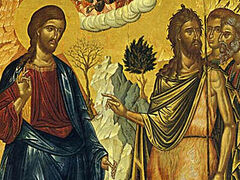 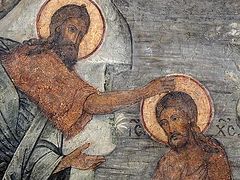 The Way of the Lord
Hieromonk Ignaty (Shestakov)

The Way of the Lord
A Homily on the Eve of the Theophany
Hieromonk Ignaty (Shestakov)
This call was directed to all of us. The path of our lives should be straightened. The sins, defects, and potholes in our souls should be filled with the grace of the Holy Spirit. 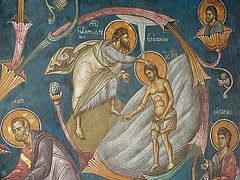 The Baptism of the Lord As a Call to Renew Our Baptismal Vows
Archpriest Oleg Stenyayev
What event reminds us of the Baptism of Christ? Why does the Nicea-Constantinople Creed mention only one sacrament—that of Baptism? Why is the feast of Baptism also called the Theophany? And how should fulfil our baptismal promises?
Comments
×