The World of Faith. Theophany

The World of Faith. On Participation in the Life of the Church and Church Feasts The Appearance of Christ Before the People. Artist: Alexander Andreyevich Ivanov Photo: wikipedia.org

The Jordan appears to us as it is in Alexander Ivanov’s painting, “The Appearance of Christ before the People”, and Michael Nesterov’s canvases—flowing between white rocky banks with sparse vegetation.

When I was driving from the Dead Sea to the Jordan, to the very place where, according to tradition, Christ was baptized and where every year on January 6 a solemn service is celebrated in the presence of predominantly Russian pilgrims, I was struck by how the surrounding landscape closely resembled the rivers of central Russia—the same willows and leaves of trees descending over the water, the soft outline of the coast, and the greenery. All that was missing was a landowner’s estate and an old house with columns. The Jordan water is silty, so it is taken into bottles and usually filtered at the parking lot. When I plunged from the boat into the water of the sacred river, I remembered distant Russia and the ardent faith that throws Russian common people on this day into ice-holes in rivers and ponds where the Great Blessing of Waters was performed.

How beautiful Theophany Vespers is, and what poetry breathes through the prayer, in which God’s Almightiness is expressed in artistic words:

“The sun sings Thy praises; the moon glorifies Thee; the stars supplicate Thee… The fountains are Thy servants.”

In the Holy Trinity Monastery of St. Jonah in Kiev I happened to see the Great Blessing of Waters, which resembled the Jordan in its abundance of water. Instead of small fonts, which we use in the north, there were more than a dozen huge barrels so all the brethren and pilgrims could have plenty of water.

One can argue against religious rites. But there is irrefutable evidence of the miraculous power contained in them. One proof of this is that time does not affect holy water—it cannot harm it. Even after decades, Theophany water, protected from dust, is as fresh as it was when it was just taken from its sources.

And the next day, the clergy walk with holy water around the parish, which has great mystical significance for believers, since the prayers for the blessing of waters speak directly of the protective power of Theophany water: “Let all adverse powers be crushed beneath the sign of the image of Thy Cross”… Water!.. What a purifying, mysterious power is in it, which people comprehend more and more! And how many diseases, previously considered incurable or requiring expensive and complex treatment, are now healed by water alone.

I saw people in one Russian city who were being carefully experimented on by doctors, who were seemingly doomed to death; but meanwhile, when they got into the hands of a doctor who worked only with water, they regained their health.

A woman was brought to such a doctor in someone else’s arms; she was suffering from total exhaustion of the body because of an incurable stomach disease. She was dying of starvation. Two or three months later, the person who had seen her in that condition met her with rosy cheeks, healthy, cheerful, and observing the fasts. And how simple was the method applied: The so-called circumabdominal compress, involving a moistened towel wrapped around the waist, over which is wound a piece of flannel. This doctor has given medicine only once and only to one of all his patients over the years of his practice.

Another case is even more striking. A hieroschemamonk in a strict monastery had been paralyzed for several years. Unable to move, he was fed by spoon. By wrapping his whole body in wet sheets covered with warm blankets on top, everything deposited and dead in the tissues began to be drawn out into these sheets through the pores (including even medicines that had previously been taken into the body but had not dissolved in it). Within a few months a complete recovery was achieved. For several years now, this hieroschemamonk has been enjoying an extremely active lifestyle, standing on his feet every day for six hours of monastic services, receiving people for general blessing and confession. This is the healing power the Lord placed in water, and this is why water was the brightest symbol of that “washing of regeneration”, which is Baptism.1

Evgeny Poselyanin
From the book, Ideals of Christian Life
Translation by Dmitry Lapa

1 It is also interesting to note that the most important recommendation for those sick or recovering from COVID is to drink 1.5 to 2 liters of water a day!—OC. 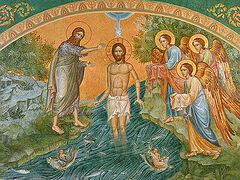 “When Thou O Lord wast Baptized in the Jordan”
Commentary on the Troparion and Kontakion of the Feast of Theophany
Professor Larisa Marsheva, Peter Gramatik
The Omnipotent God, the Creator of Heaven and earth, “the Wonderful Counsellor, the ruler of the world,” for the first time reveals Himself to mankind in Three Persons. 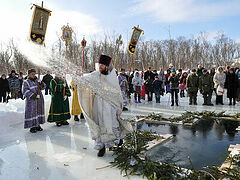 Today the nature of the waters is sanctified
Archpriest Rodion Putyatin

Today the Nature of the Waters is Sanctified
Archpriest Rodion Putyatin
Let us now depart in peace, in the name of the Lord, to the river and there immerse in its waters the Live-creating Cross of our Lord Jesus Christ. 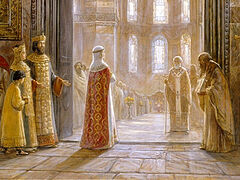 The World of Faith. On Participation in the Life of the Church and Church Feasts
Evgeny Poselyanin

The World of Faith. On Participation in the Life of the Church and Church Feasts
Introduction
Evgeny Poselyanin
What is our eternal work, if not in the glorification of Christ?
Comments

Craig Mouldey1/20/2022 9:52 pm
This makes me think of something I read recently about a certain type of water. Organized or structured water. A healthy body is composed mostly of this type of water. I must learn more about it. I've heard certain types of water called 'living water'. This is living water.
×