Those Who Were Glorified by Their Deaths 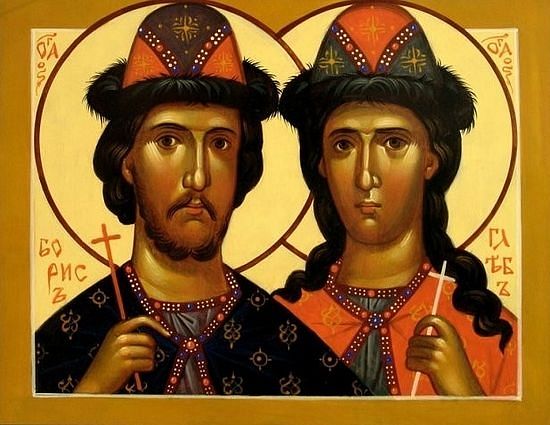 Fewer than thirty years passed after Christianity in Russia had begun to spread widely. Paganism was still alive and strong, active and hostile. In the minds of the new Christians the teaching of Christ were mixed with the teaching of the darkness of this age (cf. Eph. 6:12). And now the holy Prince and Baptizer’s children, who were born right at the time of the Baptism of Russia, gave both their contemporaries and us, who live more than a thousand years after those events, a striking example of faithfulness to the new Christian faith, the new gospel teaching, and the new commandment: love one another (Jn. 13:34). They showed this not in words, but in deeds, with their lives—they became passion-bearers, enduring suffering and in this becoming like Christ the Savior, Who endured the terrible suffering (Passion) on the Life-giving Cross for our salvation.

It is known that ten days after Prince Vladimir’s repose, the claimant to the princely throne first sent assassins to Prince Boris. When night fell and the sounds of prayer slowly died away in the tent, they committed the murder. And a month and a half later, his younger brother Gleb, who at that moment was praying for his father and brother, was assassinated as well.

Historians still argue about who the real organizer and instigator of those atrocities was. But neither time, nor the vagueness and inconsistency of the narratives in the chronicles have obscured the main thing—the greatness of the accomplished feat, which even today attracts our hearts to the names of these holy brothers.

The holiness of their labor is in the fact that they had the great courage (incomprehensible to people living in the spirit of rivalry and “the cares of life”) not to resist human evil (coming not from a stranger, but from a half-brother), but to oppose the evil of enmity so as not to multiply it and the sorrows caused by strife and disunity.

They had to have courage to resist the notions of honor and valor that prevailed among the princes of the age, who from adolescence would fight in military campaigns and battles, where shedding of human blood for achieving a goal was a normal thing.

You would have to resist and oppose cowardice, fear, despondency and despair, and pray continuously, being left alone with the enemy (who was seeking to take your life) by your devoted armed force, which could not understand how it was possible for a prince not to seek power, not to be ready for a murder or for noble revenge for the assassination of your brother.

We do not know all the details of the lives of the holy brothers before their martyrdom. Actually, they haven’t come down to us. We can say for certain that it was not their lives, but deaths that glorified them.

How could it be?

And how could it be that even a thief who hadn’t done anything good in his lifetime entered Paradise? And when reading some Lives of the saints, we can’t but marvel how a person who was inconspicuous and hardly visible in his earthly life could be glorified by people, by the Church and God.

This can be incomprehensible to our worldly pettiness and spiritual narrow-mindedness.

The words from the Holy Scriptures, the words of the Apostle Paul from his Epistle, which have been read today in honor of the holy princes, will help answer this question:

This does not mean the preordained course of a person's life is outside his control, and it does not mean his inevitable salvation or condemnation in eternity is by God’s decree.

St. Theophan the Recluse explains these words in this way: “As for free creatures—that is, us humans—the Lord does not restrict our freedom and does not make us involuntary executors of His decrees. God foresees free actions: being omniscient, He sees the whole course of a free person’s life; living outside time, He knows the total result of all his actions—and, seeing that, determines it as if it had already been accomplished.

“We (people) determine whether a person is good or bad by seeing the deeds he has done before us. And God predestinates on the basis of deeds—but deeds foreseen, as if they had already been done,” since there is nothing secret to God.

Thus God foresaw the deeds of the holy brothers Boris and Gleb, whom we are commemorating today.

He foreknew them by their faith, foreseeing their innermost hearts in the incorruptible beauty of a meek and silent spirit, which were not adorned with outward beauty, but with faithfulness to Christ.

Likewise, God foreknew the deeds of a host of saints, whose visible lives passed without outward bright signs of holiness.

“Thus God’s predestination embraces both the temporal and the eternal and raises the temporal man to the eternal,” and keeps the memory of him in the Church, the true Body of Christ, the source of life for the soul of man, who is called to be conformed to the image of the Son of God.

Just as Christ trampled down death with His death, so the holy brothers, faithful to their cross, trampled through their passion-bearing upon the law of this world, in which enmity and strife, discord, pride and self-exaltation, obstinacy and stubbornness, and touchiness reign. They abandoned this vain world. For them, Christ became “life”, and the death of all these passions became “gaining” eternal life (cf. Phil. 1:21).

Let us entreat the holy Passion-Bearers Boris and Gleb that their prayers save us from bitterness, enmity and hostility incited through the work of the evil spirits against those near and far from us, against those whom we know and whom we do not know, and keep us from the spirit of striving for superiority over our neighbor.

May the Lord grant us, through the prayers of Sts. Boris and Gleb, the first saints of the “newly chosen flock of Christ”,1 unity with our neighbors and peace in our conscience, which is cleansed by love for our neighbor and God through humility, repentance and patience. Amen.

1 From the stichera for Lord, I Have Cried. Boris and Gleb—the Holy Children of the Holy Baptizer of Rus’
Many people, even some religious Orthodox Christians, are perplexed as to why the Church numbered Boris and Gleb, the sons of Grand Prince Vladimir, among the saints? What was their Christian podvig? Princes Boris and Gleb
Proto-martyrs and Passion-Bearers of Old Russia
Boris and Gleb were the younger and much beloved sons of Grand Prince Vladimir, the ruler of Kievan Rus, who in 988 brought his subjects to the waters of Holy Baptism.
Comments
×