How to Avoid Making Fasting a Formality Today we’re going to talk about observing the fast, or rather, about what fasting should really look like and about what many people have turned it into.

While Christ was on Earth, He constantly called the Pharisees hypocrites and denounced their religious formality. And for this (in part) He was then crucified. He preached that faith must be accompanied by works of love. And He was indignant at what we now call Pharisaism: insincere faith in God, based only on the formal performance of actions.

This is a broad topic and concerns many moments in the Christian life, but now, in the Nativity Fast, let’s focus on what fasting is, how the Church understands it, and, alas, what it’s turned into for many people.

Fasting is an expression of our love for God and a time for repentance and intense prayer. In fact, fasting is a voluntary feat. We love the Lord, we’re grateful to Him for all His mercy and we desire to make at least some effort for Him. Like a child who brings his parents a drawing: so clumsy, unsightly, but made with sincere love. Needless to say, at that moment, the parental heart melts.

That’s about what our fasting is like before God. It’s not ideal. We can’t completely give up food for forty days like Christ—such abstinence would only ruin the simple, unprepared man. Therefore, in Orthodoxy, it was decided to make fasting reasonable: to give up some of the pleasures we’re used to during the fasting period.

And probably we all know that giving up animal products is just the tip of the iceberg. The most interesting thing is the depth. There are many sayings that reveal the whole essence of temperance for us: “Fasting without prayer is just a diet,” “Fast with the spirit, not with the belly,” “If fasting was in the food, then cows would be saints,” and so on.

And my favorite phrase: “The most important thing in fasting is not to eat other people,” that is, to refrain from resentment, condemnation, irritation, anger, lies, and other evils inside us. In general, we should try to observe such a fast all the time, but in the fasting periods, we should pay increased attention to it. And we all know, of course, about concessions. For the pregnant and breastfeeding, and for the seriously ill, the food fast is canceled—it’s better to refrain from the television, from sweets, and other excesses. And those who have a “forced ration” should eat what the Lord has sent. This includes those on the road, those who are visiting, or those who have to eat in the cafeteria at work or school. At home, we fast according to the canons, but there we eat what’s available.

With regard to all other pleasures, like sweets, favorite TV shows, computer games, music, and other enjoyments, you have to consider them according to your conscience. Everyone determines his own measure of fasting independently in these things, because fasting is a personal feat—it’s a relationship between God and man, so fasting can only be voluntary: whoever wants to, keeps the fast.

You would think this is all familiar to us, and there are no problems. But quite often I see people for whom fasting isn’t a feat of love, but an imposed abuse. Instead of voluntary abstinence for God, people perceive fasting, and even all of Orthodoxy, as a system of prohibitions. The ancient Holy Fathers called such a perception of faith one of the types of demonic prelest, that is, delusion. The devil is able to pervert almost any good, but this happens especially often with fasting.

Such people fast not because they love the Lord, but out of fear: “If you don’t abstain from animal products, you’ll burn in hell!” Without love, fasting becomes for them a kind of Jewish kashruth (the teaching about clean and unclean foods, that is, kosher and not kosher). They study the ingredients of the food they buy in detail so as “not to defile themselves,” otherwise they might eat some whey. If you eat such a food you’ll go to hell. At other people’s houses, they pick the meat out of a dish, constantly complaining about it with loved ones, and condemning to the point of hatred anyone who doesn’t follow the same rules in life. And of course, they can’t go without lecturing about how it’s a terrible sin to have fun during a fast.

Often such people dress in darker clothes, and go about with “fasting” faces, directly violating the words of Christ: Moreover when ye fast, be not, as the hypocrites, of a sad countenance: for they disfigure their faces, that they may appear unto men to fast. Verily I say unto you, They have their reward (Mt. 6:16).

For them, everything and everywhere is a sin. No music, no movies, no fiction books. All of this, in their view, is a road to hell. And if they become the heads of families, it’s a pity for those families—no concessions, even for the pregnant. And it doesn’t matter that this is a canon of the Church, it doesn’t matter that the mother and child can die or get sick from such abstinence. A child reaches for some candy—a slap on the hand and a shout: “Not allowed! It’s the fast!” Someone in the family allows themselves to laugh—the domestic religious tyrant quickly and publicly brings this “sinner” to “repentant” tears. And then they wonder how it happened that their children grew up to be against the Church, to be atheists. Really, how did that happen? But from the child’s point of view, it’s quite simple: He didn’t see Christian love from grandma; he saw only fear before the torments of hell in her, which she read about in a book, and fierce anger towards everyone who doesn’t understand it and tries to object. For children in such families, Orthodoxy is a religion of fear and hatred, and it disgusts them. They don’t see love, but only severity and anger. Everything you want is a sin; any alternative opinion is a sin; basically everything all around is sin, and that means—a road to hell.

For such “Orthodox,” who have forgotten about love and frantically fulfill all the rules, there’s no joy in Christ. They inure both themselves and their loved ones to such a formal religion. The morning and evening prayer rules and regular church attendance are heavy burdens for them. They obviously don’t want to do all of this, but they slavishly do it all, lest they “burn in hellfire.”

Their life is like an obstacle course: God forbid that you say or think something wrong; that you not cross yourself when passing by an icon; that you accidentally wash yourself with scented soap during the fast; that you accidentally hear secular music during the fast… For them, God is a cruel tyrant, Who will punish anyone who slips up even a little bit in life. And this tyrant, of course, will send them to hell if they don’t denounce all sinners to their faces with rage and hatred, whether they want to or not.

Unfortunately, it’s precisely such figures who most often actively speak on the street, in church, and online. There are no authorities for them; they “convict everyone of their sins,” they condemn everyone except themselves, and they hate everyone who thinks differently, and therefore they repel many people from the faith. Actually, this is the plan of satan, who seduces them.

Why is it practically impossible to persuade them otherwise? If you think about it, they’re used to slavish malice and fear of punishment. They suffer from it, and therefore they hate those who live easily and freely; those who rejoice in fasting and prayer, for whom prayerful communion with God is a manifestation of faith, hope, and love. Moreover, they like suffering. They don’t want to be free, because they’re filled with pride that they’re much “holier” than others. They’re proud of their sufferings and they get pleasure from this pride. In fact, I even feel sorry for them, but it's very hard to pull such people out.

You and I are children of God, although we voluntarily call ourselves His slaves, emphasizing that we faithfully serve our Heavenly Father with the love of children. We live in joy over the fact that God loves us. And all the components of the Christian life, such as prayer, fasting, and alms, are a manifestation of love and joy in the Lord for us. The temptation of laziness, unwillingness to fast and pray periodically overtakes every one of us. Then it’s necessary to remind ourselves who we are and Who we serve with our lives. We arise to pray with love, because this is communication with our loving Creator; we lovingly refrain from excess, because we offer this sacrifice to the Lord as our humble gift, personally made by us for Him. And we know that our Father will overshadow us with His love for these acts of love.

If you have such acquaintances who are tempted through hatred and fear, be careful. Don’t directly denounce them, otherwise you’ll run into anger. Just remind them that God loves us all and wants us to love Him in return.

The Lord doesn’t force us to fast—this labor must come from us. I sincerely wish everyone to surmount the current period of fasting, as well as all future ones, in love and joy! 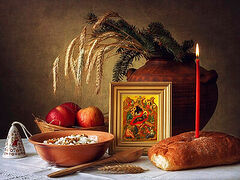 The Fast Before the Nativity of Christ

The Fast Before the Nativity of Christ
The Nativity fast was established so that we would prepare ourselves for day of Christ’s Nativity, purifying ourselves by repentance, prayer, and fasting, so that with a pure heart, soul, and body we might reverently greet the Son of God Who has appeared to the world. 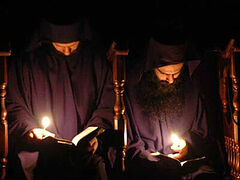 Fasting is Our Return to Paradise
Hieromonk Macarios of Simonospetros

Fasting is Our Return to Paradise
Hieromonk Macarios of Simonospetros
If greed cast us out of paradise, then its antidote, fasting, returns us to it. 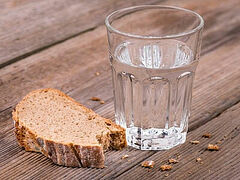 Bodily Fasting
St. John of Kronstadt
Why do we compound sin upon sin, fall endlessly into opposing God, into a life of vanity? Is it not because of a passion for earthly things and especially for earthly pleasures?
Comments