More damage has been discovered at Istanbul’s Hagia Sophia.

The great Byzantine cathedral was reconverted into a mosque in 2020 and has suffered considerable damage since then. In June, it was reported that the marble floors are cracking, and earlier in April, it was found that the Imperial Gate, the central entrance, had been vandalized.

The Association of Greek Archaeologists published an open letter to UNESCO in August, sounding the alarm about both Hagia Sophia and the Chora Monastery—another ancient monastery converted into a mosque.

The latest report also concerns more damage to the Imperial Gate, which was noticed by Turkish archaeologist Ömer Faruk Yavaşçay.

He tweeted on Saturday, with photos of the damage: “Today I found a very sad sight in the Hagia Sophia Mosque and in our history. Unfortunately, the gate was damaged again right under the mosaic with the offerings of the emperors. I took photos and videos to document this situation.”

The mosaic depicts the Emperors Constantine the Great and Justinian I offering the city of Constantinople and the Hagia Sophia to the Theotokos.

The Imperial Gate dates back to the 6th century, and Byzantine sources say it was made of wood from Noah’s Ark, writes Global Orthodox. 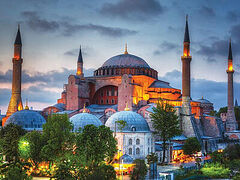 Hagia Sophia is in danger, Interparliamentary Assembly on Orthodoxy tells UNESCO
During the meeting, Charakopoulos informed the UNESCO rep about the damages the former cathedral has suffered since being reconverted into mosque. 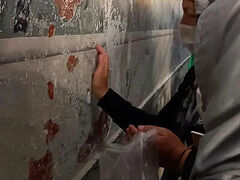 Greek archaeologists call on UNESCO to save Hagia Sophia

Greek archaeologists call on UNESCO to save Hagia Sophia
The Association believes that the photographic evidence of damage to the building that has emerged since 2020 suggests “bleak prospects for its future.” 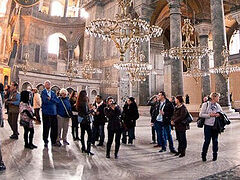 Marble floors cracking in the Hagia Sophia
The president of the Art History Association Sharif Yashar noted that the Hagia Sophia is a very fragile structure, which is harmed even by the humidity of human breathing.
Comments
×