An icon is the symbol of the invisible. If we see the external appearance of Christ or his saints, the icon must depict the internal appearance, their holiness, as well. Even secular depictions often personify some type of idea. Take, for example, the monument to Peter the Great in Petrograd: he is depicted on a horse that is rearing up, raising its rider up high; this expresses just how greatly he elevated Russia in many respects. Many other monuments depict some type of idea. If that can be so in secular art, then it should be all the more so in religious art, where the more exalted, heavenly, spiritual is depicted. The icon is not a portrait; a portrait depicts merely the person’s earthly appearance, while the icon depicts his internal state as well. Even depictions of only external appearances, differ from one another at various times. The Most-blessed Metropolitan Anastassy used to tell us how, while a student at the Theological Academy, he and his fellows were in Kronstadt at services with Righteous Father John. As Fr. John was finishing the Liturgy, he took on a brightly illuminated appearance, like Moses as he was descending Mt. Sinai. Sometime later, when Fr. John received them in his cell, he was [in appearance] an ordinary person. Our Lord Jesus Christ Himself showed us His Divine Glory once on Mt. Tabor; the rest of the time He had the appearance of an ordinary person, so that people wondered at the source of his power and the miracles [he wrought].

The icon must depict externals, but also interior life, holiness, and proximity to Heaven. The principal means for accomplishing this is in the face, the facial expression and its look depicted on the icon; also, the rest of the icon must be consonant with that expression. It was on the depiction of the inner condition of the soul, hidden by the flesh, that our Orthodox iconographers focused their attention. The better they were able to accomplish this, the better the icon appeared to be. Often, there would be deficiencies in the manner of depicting various parts of the body—not because iconographers were doing it consciously, but because [their efforts to accomplish their principal goal did not always allow them to give sufficient attention to secondary aspects of their work. By the way, there is no doubt that even in ordinary snapshots, especially candid shots, many would show the human body in unnatural positions; but that is something we would not usually notice.

It is impossible to write an icon that depicts only external appearance of the body; it must reflect unseen spiritual struggles and must radiate with Heavenly glory. That is something fully attainable by one who himself lives a spiritual life, and who understands and holds dear the lives of the saints. That is why in antiquity our iconographers always did so and prepared themselves to do so through prayer and fasting. To many of the icons written in this way, the Lord imparted the power of working miracles.

Of course, any icon that has been consecrated should be accorded reverence and should not be treated carelessly and disrespectfully. Therefore, we should avoid judging icons already found in churches, and instead should always strive toward the best. The main thing is to pay attention not so much to an icon’s outer beauty, as to its spirituality. Icons that clearly do not satisfy the demands of Orthodox iconography should not be placed in churches; sometimes they should not even be placed in homes.

Not everyone versed in art and capable of drawing can write an icon. Often it is the iconographer’s attitude and desire to serve God that has greater importance than the actual art of painting. In addition to the good brought from the West after Peter the Great, there were also a great many new influences, foreign to the spirit of Orthodoxy. A significant segment of Russia’s educated class fell under the sway of those influences, resulting in many unhealthy, bad innovations finding their way into their works. To some degree, this was reflected in iconography as well. Instead of emulation of ancient Russian iconographers, emulation of Western artists foreign to Orthodoxy became predominant. Although very beautiful, the new images did not comport with the spirit of iconography. A spirit foreign to Orthodoxy began to take root in Russia, and gradually shook it apart.

Now the words of the prophet are addressed to us: “Do not give away your glory to another, and to a foreign people what is of use to you” (cf. Is. 48:11). As in life, so also in church customs we must return to those firm and pure foundations upon which Russia was built and upon which it stood. Our iconography is also a reflection of those foundations. Icons for our churches should not be written in a spirit foreign to Orthodoxy. Those who affirm that Orthodox icons must be written in somber tones, and that the arrangement of the body must be unnatural, are mistaken. In antiquity, icons were written using bright radiant colors; they turned dark with age and with the accumulation of dust over the centuries. However, at the same time one should remember that in fact many Holy Ones, spending their lives in hot deserts, had dark complexions, and that in fact many had bodies emaciated by many years of spiritual struggles. They were famous not for earthly, but for heavenly beauty. Through their prayers, may they help us, so that our churches might be reflections of Heavenly glory, and so that our flock might unite in seeking after the Kingdom of God and, both in their church and in their lives, they might preach the truth of Orthodoxy. Wonderworking Reproductions of Icons: How Does the Church View Photo-Reproductions of Holy Images?
Part 1: The “Ecclesiological” Arguments Against the Veneration of Icon Reproductions
Vladimir Nemychenkov
The described wonderworking icon is nothing more than a reproduction on paper of the “St. Seraphim—Diveyevo Tenderness” Icon. That is, this is the same kind of “photo-reproduction” denigrated by some people. 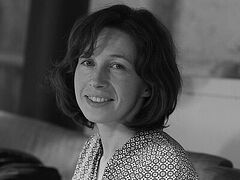 “For me, iconography is just like prayer”
Olga Spiridonova on her life’s journey to iconography

“For me, iconography is just like prayer”
Olga Spiridonova on her life’s journey to iconography
Olga Spiridonova
An icon painter’s goal is to create the means, or the language, of communication with the prototype, and beauty should be that language. 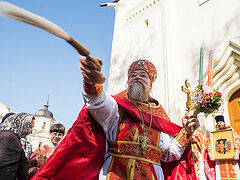 Archimandrite Luke (Golovkov): “A true icon depicts the heavenly world.”
An interview for the 30th anniversary of the founding of the Iconography School at the Moscow Theological Academy. Part 1
Archimandrite Luke (Golovkov)
Icons and paintings have crucial differences. Only the artist who is involved in the life of the Church and has developed a prayerful relationship with God can paint icons.
Comments