Healing of the Ten Lepers Another instance of the healing of leprosy is described by the evangelist Luke. Here Christ cleansed ten leprous men from their illness. This was on the road that Jesus Christ was travelling to Jerusalem, when in the company of his disciples and a crowd of people, He entered a certain village. Before the very entrance, as the evangelist says, there met him ten men that were lepers, which stood afar off: And they lifted up their voices, and said, Jesus, Master, have mercy on us.

Seeing these unfortunate men and not calling them to come near him, the Lord said to them from a distance, Go show yourselves unto the priests. And these simple words were sufficient for the lepers to silently turn around and walk down the road to the priests. Christ’s words were “with power”, and the lepers were sure that their salvation was hidden in His words. How, and when? And then to their great amazement and joy, not having gone perhaps a few hundred steps away, they saw their hands and feet completely cleansed of leprosy. With a feeling of strength and health throughout their bodies, they quickened their pace to the priests, now completely sure of their healing.

However, one of them stopped, and seeing that he was healed, turned back to look for and catch up with Jesus. And when he found Him, he with a loud voice glorified God, and fell down on his face at his feet, giving him thanks; and he was a Samaritan…

Here also Christ notes the holiness of the feeling of gratitude to God for the benefactions received on the part of the one leper who turned back, and judged those in whose hearts none of that noble feeling was found. Turning to the people, the Lord said, Were there not ten cleansed? but where are the nine? There are not found that returned to give glory to God, save this stranger. But to the Samaritan himself, who, completely disregarding the age-old disagreement and hatred of the Samaritans for the Galileans and Judeans surrounding the “Teacher” went on glorifying and thanking God, Christ said, Arise, go thy way: thy faith hath made thee whole.

In this miracle of the healing of the ten lepers, just as in the miracle of the one leper, is expressed first of all God’s mercy for suffering mankind, as well as the authority of the God-Man over leprosy as a mark of sinfulness; moreover, in the supreme feeling of gratitude to God, barriers of nationality born of people’s sinfulness were done away with, and the saving power of faith in Christ as God was finally confirmed. Out of ten lepers only one heard from Christ the word of salvation, while all the rest, who received deliverance from a serious bodily infirmity (exclusively by Christ’s pity for them), had not yet become spiritually healthy. And we don’t know whether or not those nine used their health for the salvation of their souls; for it is by no means a given that a “in a healthy body lives healthy spirit”.

In Church practice the gospel of the “ten lepers” is usually read at molebens of thanksgiving to God for His benefits to us. 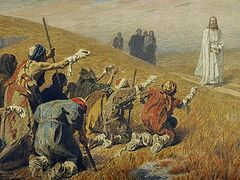 The Healing of the Ten Lepers
Archpriest Alexander Shargunov

The Healing of the Ten Lepers
Explanation on the 30th Sunday after Pentecost, Luke 17:12–19
Archpriest Alexander Shargunov
This is our common spiritual leprosy—ingratitude to God and people. 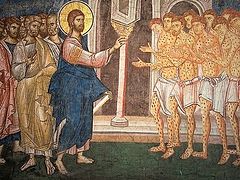 Gratitude is a Fruit of Living Faith in God
Homily on the Gospel of Luke, 17:15–19
Hieromonk John (Ludishchev)
The feeling of gratitude is commingled with living faith in God, with our wholly submitting ourselves to His will, and is a fruit of it. Hence, only the heart that strengthens its faith in God’s providence is capable of seeing the mercy embracing us. 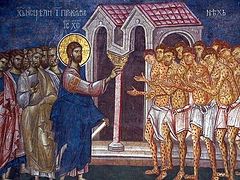 Twenty-ninth Sunday after Pentecost: The Healing of the Ten Lepers
Luke 17:12-19
Blessed Theophylact of Ochrid
From this one may learn that nothing prevents a man from living in a manner pleasing to God, not even if he belongs to a despised race, if only he has a good will and disposition.
Comments
×