Igumen Israel (Andreyev): “God sent us the soviet government as punishment, to bring us to our senses; but to some, as a future reward for suffering”

For the eighty-fifth anniversary of Igumen Israel’s martyrdom Igumen Israel (Andreyev) Igumen Israel (before monasticsim Ivan Andreyevich Andreyev) was born in 1870 in the village of Khvoshchevka, Gzhatsk district [since 1968, Gagarin district.—Trans.] of Smolensk Province to a peasant family. On April 30, 1895, he joined the Gethsemane Skete of the Holy Trinity-St. Sergius Lavra. Natalia Alexandrovna Verkhovtseva (1893–1991), a hospital nurse and Fr. Israel’s spiritual daughter, recalled:

“A peasant’s son from Smolensk province, he was a shoemaker from his youth. Once he came of age he was supposed to get married, but before this important step, drawn by an irresistible force, he decided to go to Moscow to venerate the Kremlin shrines1 and visit en route his relative who was a nun. The Kremlin and its shrines captivated his heart, and, without returning home, he commended his life in obedience to the Queen of Heaven and Her Gethsemane Skete.”

“Abbot Daniel, who was then known for his wisdom and the austerity of his life, took Novice Ivanushka [a diminutive form of the name Ivan.—Trans.] as his cell-attendant. The young novice monk went through a wonderful school that educated and forged his soul under the guidance of his abbot, who trusted him and showed him goodwill. As a monk Fr. Israel served Abbot Daniel selflessly during the years of his serious illnesses, caring for him like a loving son until the last moment of his life,” Natalia Verkhovtseva wrote. “After the deaths of Abbot Daniel and the successive Abbots Allary and Mefody, the brethren elected him ‘builder’, and soon he became abbot. With a firm, unbending hand, the abbot guided the brethren, indulging neither them nor himself. Simple and modest in his personal needs, he was on equal footing with everyone in everything—in chanting, vigils and fasting. He was always at the head in work and labor. He combined great spiritual experience with a practical mind and native wit. Always prudent and inwardly self-disciplined, this semi-literate man with great natural gifts was loved and revered by the most intelligent and educated secular people—and there were many of them in Sergiyev2 at that time. Not only did he impress like-minded people, but even his ideological enemies gave up and lost ground.”

“In those years,” A. V. Komarovsky wrote in his memoirs, “Fr. Israel was about forty-five. Of medium height, with a broad and thick chestnut beard and a friendly face. He gave the impression of a lively and sociable person. He was probably not only a good abbot, but also an excellent administrator, since the skete’s properties were in exemplary order. Sometimes Fr. Israel could be seen in the town, riding at full speed on business on a well-groomed gray trotter harnessed to a high sleigh or an open carriage. The townsfolk would stop and follow him with approving glances. They liked both the abbot and this fast ride.” Natalia Alexandrovna Verkhovtseva “The whole burden of the struggle for the life of his beloved skete lay on his shoulders,” N.A. Verkhovtseva wrote. “With what unbending will and tireless energy, with what intelligence and foresight, with what boundless self-sacrifice this remarkably gifted man headed the skete! The skete, which had been turned into an agricultural cooperative, continued to thrive, providing an example of selfless labor—the best vegetables, the richest apiary in the area… It seemed that the seal of God’s blessing was on everything touched by the father-superior’s hard-working and tireless hands.”

In 1923, Abbot Israel was arrested for the first time, and held for three months. Details of the arrest are unknown. On January 19, 1925, he was again arrested on charges of, “being a member of the agricultural cooperative in the town of Sergiyev (a former monastery), carrying out anti-Soviet propaganda among the members of this cooperative, calling for non-compliance with its regulations and its transition to monastic status, and saying that Soviet power would soon end.” He was kept at Butyrskaya Prison in Moscow. He pleaded not guilty. On April 3, 1925, he was released under amnesty.

Between 1929 and 1931, Fr. Israel lived in Zagorsk [the name of Sergiyev Posad between 1930 and 1991.—Trans.] and served at the Church of the Holy Apostles Peter and Paul. He was close to the holy Elder Alexei (Solovyev; 1846–1928) of the St. Zosima-Smolensk Mother of God Monastery, who was a resident of Sergiyev after the St. Zosima Monastery was closed. In her memoirs, Natalia Alexandrovna, in whose house Elder Alexei lived from 1923, wrote that before the elder’s death, Igumen Israel gave him final Unction. And Hieromartyr Ilia Chetverukhin and his wife Eugenia testified that Fr. Israel had participated in Elder Alexei’s funeral.

In 1931, Igumen Israel was arrested on charges of “being a member of the Zagorsk branch of the ‘True Christians’ counter-revolutionary organization and participating in anti-Soviet propaganda.” On May 20, 1931, the troika at the Plenipotentiary Representation of the Joint State Political Directorate (“OGPU”) for the Moscow region sentenced Igumen Israel to ten years of exile in Kazakhstan. On December 23, 1937, he was arrested in Semipalatinsk3 in the East Kazakhstan region, and sentenced to execution by the troika of the Directorate of the People’s Commissariat of Internal Affairs (“UNKVD”) for the East Kazakhstan region.

During interrogation he said:

“I assess modern political events thus: After the example of mankind’s history, when there were such events as the Babylonian captivity, the Flood, and the Tatar-Mongol Yoke in Russia, God has sent us the Soviet government as a punishment and to bring us to our senses—but to some as a future reward for the suffering they now endure.”

On December 29, 1937, Igumen Israel was executed by firing squad in Semipalatinsk.

1. Those Who Suffered for Christ in the Land of Radonezh During the Years of Persecutions and Repressions of the Twentieth Century. A Commemoration List with Brief Biographical Notes [in two volumes], compiled by Hieromonk Pafnuty (Fokin), (Sergiyev Posad: Holy Trinity-St. Sergius Lavra, 2021), 1:114–115.

1 The Moscow Kremlin, besides being the seat of government, is filled with churches holding many holy relics and miraculous icons. This was especially true before the Bolshevik revolution.—OC.

2 The name of the town, Sergiyev Posad, where the Holy Trinity-St. Sergius Lavra is located, between 1919 and 1930.—Trans.

3 Now the city of Semey.—Trans. 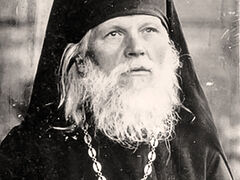 The NKVD Named the Famous “Ippolit Case” After Him
For the eighty-fifth anniversary of the repose of Igumen Ippolit (Yakovlev), elder of the Holy Trinity-St. Sergius Lavra

The NKVD Named the Famous “Ippolit Case” After Him
For the eighty-fifth anniversary of the repose of Igumen Ippolit (Yakovlev), elder of the Holy Trinity-St. Sergius Lavra
Hieromonk Pafnuty (Fokin)
In operational development the case was called “Ippolit”. Fr. Ippolit as the brethren’s father-confessor probably aroused special hatred among the NKVD representatives. 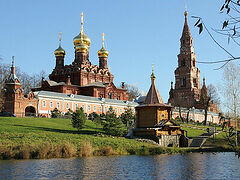 The History of the Gethsemane-Chernigov Skete of the Holy Trinity-St. Sergius Lavra

The History of the Gethsemane-Chernigov Skete of the Holy Trinity-St. Sergius Lavra
Simplicity and rigor were commanded by the ever-memorable founders of the skete. 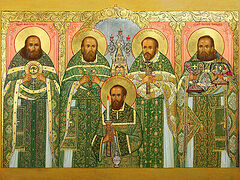 For the 100th Anniversary of the Shooting of the Radonezh Martyrs

For the 100th Anniversary of the Shooting of the Radonezh Martyrs
Venerable Martyr Makary (Telegin), Hieromartyrs Alexander Zaozersky, Christopher Nadezhdin, and Vasily Sokolov, and Martyr Sergei Tikhomirov
On April 3, 1922, a commission came to the St. Sergius Church of the Lavra’s Holy Trinity dependency in Moscow, behaving deliberately rudely and blasphemously.