Human Life is a Vale of Tears He was still a young boy when Monk Kornily of Krypetsky Monastery foretold that he would become a monk and an elder. Throughout his long and hard life, the Elder battled against the unclean spirits. Elder Simeon had great love for God and men and great humility. The Lord also gave St. Simeon great gifts for his disposition towards the work of salvation: the gift of healing souls, clairvoyance, and the gift of wonderworking.

He reposed in the Lord on January 18, although the Lord had revealed to him that he would die on January 15. Realizing that this meant the burial would take place on the feast of the Theophany of the Lord, the abbot blessed him to die another day. Out of humility and obedience to the abbot Archimandrite Alipy (Voronov), the Elder begged God to allow him to die later.

Human life is a vale of tears, with one temptation replacing another. It can seem like temptations will never end, but we must remember and not forget that the clouds are replaced by the sun. So in life: We rest a little at the oasis, and again the desert of sorrows. The Holy Elders, having passed through this desert of sorrows in perfection, instructed not to become despondent, but to hope in God: Many are the tribulations of the righteous, and the Lord shall deliver them out of them all (Ps. 33:19).

Those who desire to save their souls should remember that it’s impossible to be saved without sorrows and temptations, and therefore they should thank God for all things sorrowful. Sicknesses, misfortunes, slander, insults, troubles, persecution, and the like are salvation for man.

Tribulations are primarily the lot of those who are being saved in the last times: We must through much tribulation enter into the Kingdom of God (Acts 14:22).

Our salvation is on the Cross, namely in the sufferings of the Cross. Through unjust sufferings and sorrows, we are grafted onto the Cross of Christ and from it we receive the power of the Cross, which purifies, sanctifies, and attracts the blessing of God. There’s no other path to salvation than through Golgotha and the Cross.

Our life is but a minute compared to eternity, and therefore the present temporal sufferings are worthless compared to the glory that will be revealed in us (cf. Rom. 8:18) (if we are found worthy) in the coming age.

The most important thing is to repent of our sins. The Lord will have mercy only for the constant struggle, not for “correctness,” which you don’t and won’t have (and if you do—you’ll become proud). Don’t create bitterness for yourself, only endure insults and sorrows.

It’s possible to endure illness or sorrow but with grumbling against God or men, complaining about your fate. Such “good works” are displeasing to the Lord, as they’re done without prudence.

Whoever avoids sorrows renounces his salvation, and for the temporal sweetness of this life is deprived of eternal life, of ever-blessed rest.

In general, this short earthly life with its disasters and sorrows is given to man that he might use it for his salvation; that is, to return himself from life to death.

The monastic path is difficult [Elder Simeon wrote in his biography], but the ascetic labor of the schemamonk is more difficult, if it’s borne as our Lord Jesus Christ, Who laid down the ascetic way, indicated to us. With the visitation of His All-Holy Spirit, everything can be overcome, endured, survived, and the longed-for, unspeakable eternal inheritance in His Heavenly Kingdom can be acquired.

One pilgrim asked Elder Simeon several times about her son—whether he’d be saved. One day he answered her: “I’m tired of hearing about your son… How can he be saved if he himself doesn’t want it?” But she again started testing the Elder’s patience, continuing to ask if he’d be saved. Then the Elder told her: “You really want him to be saved? He can only be saved through sorrows, and all sorrows will fall to you. But don’t grumble—bear them with patience, without grumbling.” And her son became very ill. Not far from Pechory, in the village of Maly, there lived Matushka Anna—the widow of the local priest Fr. Vasily Rogovsky—a spiritual daughter of Elder Simeon, respected by all. In the old days, their family suffered much from the godless authorities—they spent time in Siberian exile. But even in those years, the Elder always remembered them and strove to support them in a Christian manner, at least with words of comfort and hope.

This is evidenced by the postcard sent by the Elder to their family in Krasnoyarsk exile, lovingly preserved by Matushka Anna. It reads:

A heartfelt greeting to dear Vasily, Anna, and Maria, wishing you good health and all good things. “Humility, patience, and labor can overcome anything,” according to our Russian saying. Faith in God and hope in God will fix everything, and the Lord will help.

And so it happened just as Fr. Simeon had foreseen. Despite all their sorrows and woes, these sufferers eventually returned to their native lands. 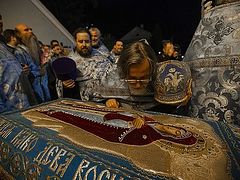 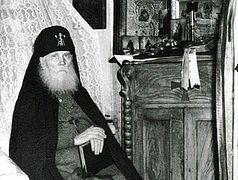 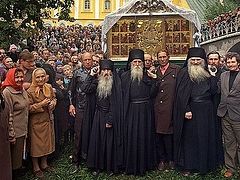 In Pechory
From Conversations with Pilgrims

In Pechory
From Conversations with Pilgrims
Lolita Naranovich
The feast of the Dormition of the Most Holy Theotokos… The patronal feast of the Pskov Caves Monastery. Thousands of pilgrims are drawn here from the various corners of Russia. Hundreds of colorful scarves, thousands of lit candles…
Comments
×