A special artoklasia-litiya service was held in the Cathedral of St Nicholas in Kampala, Uganda on January 22 to thank God for the gift of life and good health granted to the frontline doctors who contracted the Ebola virus in September of last year. A number of them did not survive the deadly hemorrhagic fever, but through the efforts of the health workers and the grace of God, a number of them were healed and were available to offer a special service led by Dr. Dimitrios Kkunsa and Dr. Edith Nakku-Joloba, the head of Uganda Medical Association (UMA). The service was celebrated by the assistant cathedral dean, Fr. Stelios Kasule on the Sunday of Zacchaeus, with the blessings of Metropolitan Jeronymos of Kampala, who was also present.

On September 20, 2022, the Ministry of Health in Uganda and World Health Organization (WHO) declared “an Ebola disease outbreak caused by the Sudan ebolavirus species, after the confirmation of a case in Mubende district in the central part of the country.”

From the onset, there was no ideal isolation or treatment centers, especially for the front-liners, leading to several untimely deaths. Improvements were made and the remaining doctors were moved to Entebbe Treatment Center and by the grace of God, five of them were discharged on October 12, having been healed of the “incurable” disease. 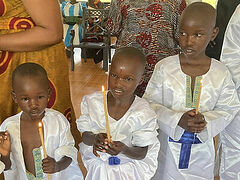 30+ illuminated in two mass Baptisms in Africa
More than 30 people received the washing of regeneration in two separate mass Baptisms at Lake Victoria, which extends through Uganda, Kenya, and Tanzania, on the feast of the Theophany, January 19. 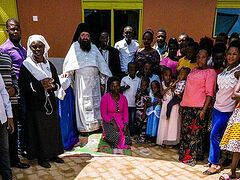 New mission center in Kampala will help Ugandan Church communities become self-sufficient
St. John the Wonderworker Orthodox Christian Mission Center was officially established on Palm Sunday 2022 with the blessing of the late Metropolitan Hilarion (Kapral) of the Russian Orthodox Church Outside of Russia. The main goal of this mission is to create an economically independent and self-sufficient group of local leaders. 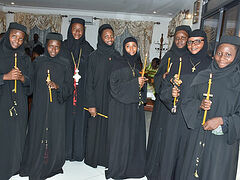 Several nuns tonsured at Ugandan monastery
On Bright Saturday, a number of women took a further step in dedicating their lives to Christ at a monastery in Uganda.
Comments